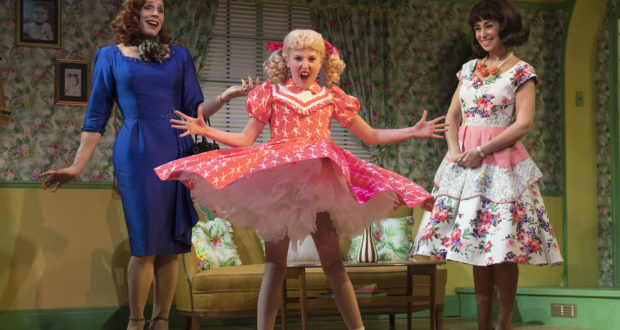 Pros: A cast to die for.

Cons: The plot is a bit stretched.
Ruthless! The Musical, Arts Theatre – Review

Pros: A cast to die for. Cons: The plot is a bit stretched. The long-running off-Broadway hit Ruthless! The Musical was welcomed to the West End with a string of mixed reviews. Described as "pointless, flimsy and clunky" by some of the top critics, this first commercial production in the UK has, however, attracted the favours of other reviewers and spectators alike. When I attended the day after its official press night the audience seemed to enjoy it very much. The stakes were perhaps set too high for this 1992 spoof which, like its central character Tina, was "just born&hellip;

A funny, irreverent and beautifully designed musical that pokes fun at other musicals.

The long-running off-Broadway hit Ruthless! The Musical was welcomed to the West End with a string of mixed reviews. Described as “pointless, flimsy and clunky” by some of the top critics, this first commercial production in the UK has, however, attracted the favours of other reviewers and spectators alike. When I attended the day after its official press night the audience seemed to enjoy it very much.

The stakes were perhaps set too high for this 1992 spoof which, like its central character Tina, was “just born to entertain” and provides a limited reflection of the real world. The producers unnecessarily attracted scrutiny for attempting to ride the “Time’s Up” wave with an all-female set of characters. Any questions on this count were promptly answered with remarks about the lack of women within the creative team and the overall portrayal of flawed and cartoonish female roles.

Intended as a parody of legendary titles like Mame, The Bad Seed and All About Eve, this is nonetheless a feast for musical theatre lovers. From Sunset Boulevard‘s Norma Desmond, to Mama Rose in Gypsy there are countless sarcastic references to the genre and its protagonists to be found here. Despite not being particularly familiar with the Anglo-American musical tradition, I still appreciated the ability of Ruthless! The Musical to generate many laugh-out-loud moments thanks to its sheer brazenness and irreverent jokes.

Its leading character Tina Denmark (played by the confident Anya Evans on the night I saw it, but covered in turns by four young actors) is far from being the cute little girl with blonde pigtails featured on the billboards. Cursing, smoking and, erm, criminal acts are some of the actions that make this performance unsuitable for children under ten. On the other side of the Atlantic this role has historically contributed to launch the careers of Laura Bell Bundy, Britney Spears and Natalie Portman.

Desperate to obtain the leading role in her school’s play, the eight-year-old Tina is ready to do whatever it takes to be under the limelight. She finds a suitable mentor in the pushy talent agent Sylvia St Croix, whose eagerness to reveal an emerging talent is so engrossing that even Tina’s mother, Judy Denmark (Kim Maresca), cannot remain immune to the fame bug.

With a golden voice Maresca reprises her role after the US run, together with a star-studded cast that includes the king of camp Jason Gardiner – straight from ITV’s Dancing on Ice – and the stage legend Tracie Bennett who plays Tina’s grandmother, the harsh theatre critic Lita Encore. Excerpts from her review of Tina’s school show are priceless. She’s so heartless that even her own granddaughter isn’t spared a poisoned judgement.

Delightful numbers come also from Lara Denning, doubling up as Eve and Louise Lerman – Tina’s little talented rival – and Harriet Thorpe as the self-assured theatre teacher on the brink of a nervous breakdown, Myrna Thorn.

A sudden change in the protagonists’ personalities is well represented by the transition from the first act’s bright and welcoming fifties household into a sexy Manhattan penthouse with dim lights and sequinned gowns. Morgan Large’s set and costumes are absolutely gorgeous and flourish under Tim Lutkin’s elaborate lighting, recreating all the cheesiness of many classic musicals.

Despite a plot that at first appears more appropriate for a situation comedy than a self-contained drama, serious topics eventually emerge to the surface, providing some food for thought. The pressure that promising children often receive from adults, and the taxing demands of a performing career are highlighted in this tongue-in-cheek pastiche, where a young talent is pushed to grow up only too quickly to maintain a space under the limelight. The show also touches upon the lengths that actors are prepared to go to in order to succeed; this raises some timely issues about self-respect, integrity and the strength required to say “no” when career choices call for a compromise of our principles.

This show’s blunt attitude might be more appropriate for a fringe audience, especially given its contraversial lightheartedness. Whatever its desired demographic, this particular audience member found it outrageously funny.