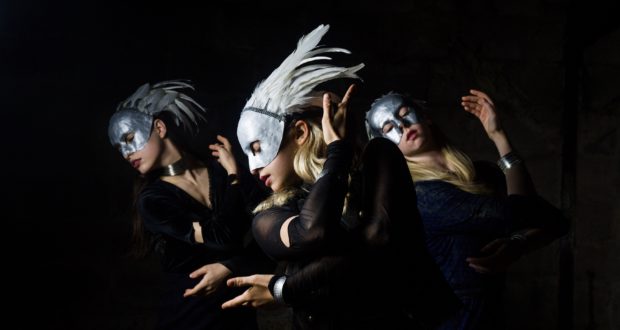 Pros: Atmospheric design and stylish costumes. Cons: Predictable and lifeless characterisations. It’s difficult to say anything that hasn’t already been said about Shakespeare’s Macbeth, and unfortunately with this production Mark Bruce Company doesn’t manage to. The story is told straightforwardly, with the murder of King Duncan taking place in the first act, followed by Macbeth's comeuppance being delivered in the second. Of course, it is a fabulously creepy, bloody, and psychologically rich play. I’m sure many people will find this stylish dance-theatre version very entertaining. In Wilton’s main hall, the rumbles and flashes of a storm were brewing onstage as the&hellip;

Well performed and beautifully designed, but it was style over substance with no new insights into this familiar play.

It’s difficult to say anything that hasn’t already been said about Shakespeare’s Macbeth, and unfortunately with this production Mark Bruce Company doesn’t manage to. The story is told straightforwardly, with the murder of King Duncan taking place in the first act, followed by Macbeth’s comeuppance being delivered in the second. Of course, it is a fabulously creepy, bloody, and psychologically rich play. I’m sure many people will find this stylish dance-theatre version very entertaining.

In Wilton’s main hall, the rumbles and flashes of a storm were brewing onstage as the audience took their seats, which instantly created a foreboding atmosphere. Phil Eddolls’ design was one of the piece’s strong points throughout. Dorothee Brodruck’s costumes brought the witches up-to-date as a trio of goth/zombie/bag ladies. A clever device twisted their faces into ugly hags in an instant. Guy Hoare’s lighting was masterful at creating shadow and texture. There was lots of foreground and background – Macbeth was at times just a black outline downstage while his thoughts danced behind him. A dinner scene was lit so beautifully, it was like a painting. The design appeared to lead the way in contemporising the play – many characters sported tattoos. At one point Macbeth sat lost in thought while a woman tattooed him, which was interesting but didn’t go anywhere.

The choreography was a mix of ballet and contemporary. There were lovely touches in the group sections which referenced Scottish folk dances. I loved Macbeth’s villainous pas-de-chat, and the witches who skipped like horrible, demonic puppet-dolls. The partnering between the Macbeths (Johnathan Goddard and Eleanor Duval) was effortless, but I didn’t feel their interpretation of the characters added anything to these familiar dramatic roles. After the murder of Duncan, Lady Macbeth crouched and rubbed her trembling hands, before issuing a silent scream. It was very predictable. Johnathan Goddard is blessed with magnificent bone structure – his cadaverously handsome face fitted the role perfectly – but he seemed to only have two expressions: haunted and upset. There were an awful lot of people standing around staring meaningfully at one another. Even for an audience member who didn’t know the story, I don’t think that a full six seconds of Macduff smiling enigmatically at Macbeth is going to help.

The piece was beautifully staged and well danced. Nevertheless, I couldn’t help feeling that the company had inadvertently impoverished themselves by making the decision to tell the story solely through dance, abandoning the canonical text. Mark Bruce simply hasn’t made strong enough interpretative choices with the material, and the overall texture of the work was flat and lifeless.

Versions and reworkings of Shakespeare are hot right now in dance-theatre. Last year, Company Chordelia’s Lady Macbeth: Unsex me here created a brilliant character study of Lady Macbeth which wove British Sign Language into the choreography to great effect and brought Lady Macbeth’s madness and suffering bang up-to-date. Lost Dog’s Juliet and Romeo, which premiered last month, is of a markedly different tone but shows just how outrageously far one can go with the Bard, with illuminating and hugely entertaining consequences. Both these works gave the characters and story fresh relevance. Macbeth is a great play, but this production was just more of the same.