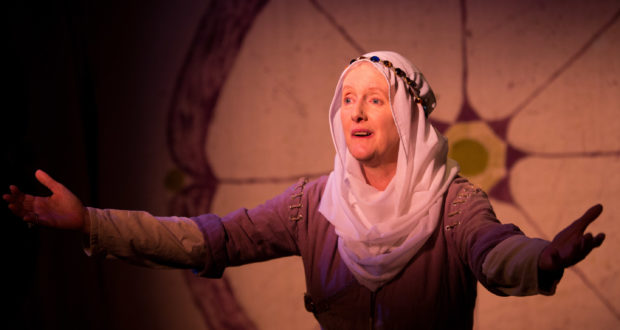 Pros: Two well scripted plays fleshing out deeply contrasting characters. Cons: Although competent, Sarah Crowden sometimes struggles to get under the skin of Hilda and Virginia as characters. As the beast from the east slowly and inexorably took hold, I sought refuge in the welcoming glow of the Jermyn Street Theatre. I was doubly fortunate to view two pieces by renowned playwright and novelist Maureen Duffy. Hilda and Virginia is an intriguing double-bill telling the story of two remarkable but very different women. In the first play, A Nightingale in Bloomsbury Square, Virginia Woolf looks back on her life,&hellip;

Both plays are sharply observed and well written but thank god for St. Hilda who lightened an otherwise sombre mood.

As the beast from the east slowly and inexorably took hold, I sought refuge in the welcoming glow of the Jermyn Street Theatre. I was doubly fortunate to view two pieces by renowned playwright and novelist Maureen Duffy. Hilda and Virginia is an intriguing double-bill telling the story of two remarkable but very different women.

In the first play, A Nightingale in Bloomsbury Square, Virginia Woolf looks back on her life, uncovering the hidden stories behind her iconic novels. The Choice relates the story of St. Hilda of Whitby, who brought Christianity to the Anglo-Saxons, and in her spare time was also a businesswoman, teacher and adviser to kings. Both parts were played by Sarah Crowden, a doyen of TV costume drama including Downton Abbey, Upstairs Downstairs and Wolf Hall.

Virginia’s story begins with a moving and ultimately sad voiceover that gave a deep insight to her state of mind and constant struggle with depression. In just under an hour, we skim the essence of Virginia’s character; a cosseted upbringing in the late Victorian era; her gradual rise to prominence as an author and darling of the Bloomsbury set in the early 1920s. The play alludes to her mental health, lesbian affairs and relationship with her husband Leonard. It’s not entirely comfortable viewing and one readily appreciates what a tortured existence she endured; eventually taking her own life at the pitifully young age of 59.

But the tale of St. Hilda, Abbess of Whitby is an altogether different kettle of fish. Hilda, for a 7th Century woman was certainly more upfront and feisty than Virginia could ever hope to be. A leading advocate of Anglo Saxon conversion to Christianity, she neutralised the Celtic version in favour of the more glamorous Roman variety. She came across as a shrewd, political operator who flourished in a man’s world. Hilda added some much needed levity following the layered depression of Act I.

Whilst Hilda and Virginia were strong women albeit separated by thirteen centuries, it was difficult to establish what else they had in common, if anything? This may not have been the purpose, but it was always tempting to look for common ground they may have shared, if not why else put them together? Sarah Crowden seemed hesitant and unsure of the characters she portrayed. I never felt she established an emotional connection to be truly convincing. Second performance in, there may be odd glitches to cure, but with a one woman show absolute perfection is an impossible dream.