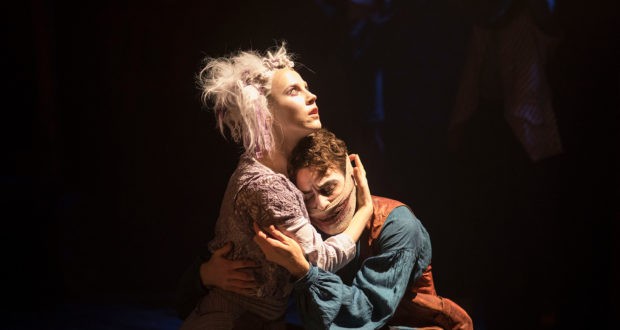 The Grinning Man is a delectable medley of theatre: a musical, a puppet show and, most of all, an imaginative reinvention of Victor Hugo’s carnival novel The Man Who Laughs – allegedly the inspiration behind the infamous Joker in the Batman franchise. The musical is now thrilling West End audiences at Trafalgar Studios after an initial debut at the Bristol Old Vic, and we caught up with performers Louis Maskell and Sanne Den Besten to get the low-down on the unique production and its blend of past and present.

Tell us about your characters!
Sanne Den Besten: Dea is fearless, intuitive, naive, honest, loyal and always sees the positive in things. Even when people around her might give up, she will push on. Even though she’s blind, she sees things no one else does.

The fact that Dea is blind was challenging at the start, as it wasn’t something I’d ever explored before. I still remember one of the first rehearsal days where Louis and I were running around the rehearsal room, climbing on things. I had my eyes closed and it felt so freeing and exciting to be brave, running around completely trusting that another person would catch you.

Louis Maskell: Grinpayne is ‘The Grinning Manʼ. His face was cut as a boy and the show is about the journey he takes to discover who inflicted this mark and how along the way, his disability changes both other people and how he perceives himself.

What was the audition for Dea like?
SDB: Very exciting! I fell in love straight away with the music and the story and thought, ‘I want to be a part of this’.

The fact that it’s a new show and you’re getting the chance to create something is exciting (and terrifying!), and from the very first audition I felt the freedom to make my own choices for the character.

What is it like coming in to a production that has previously seen success elsewhere? Did you see the show in Bristol and know what to expect?
SDB: Unfortunately, I didn’t catch the show in Bristol. This also gave me the chance to start rehearsals with an open mind, and during our first read/sing through on the very first day of rehearsals, I understood straight away why it was such a success in Bristol. It was so thrilling!

Louis, you’re and old hand! What made you want to continue in the role, and has the novelty of playing the lead worn off yet?
LM: I don’t think originating a role in the West End will ever wear off! It’s a dream come true, and to be able to realise that dream in a show that I’ve seen grow from Bristol to the heady lights of London is thrilling and is why I wanted to be an actor.

How do you think the show fits in to the London theatre scene?
SDB: It’s a classic Victor Hugo story set in the 18th century, but at the same time, it totally reflects our modern society. It’s witty, it’s dark, it’s a fairy-tale, it’s gothic, it’s sexy and it’s silly. In a way, this show completely doesn’t fit into the ‘West-End scene’, which is exactly what makes it so unique.

Is there something exciting about performing an original show that is set on a classic?
LM: Performing an original show is exciting regardless of whether it’s traditional or modern. What is different about our piece is that it manages to seamlessly blend the two together, which gives this show and this experience a unique frisson of excitement. It seems to speak to people. Just the other night, a girl explained to me that she had been in a serious accident as a child that left her with numerous scars and that our show had spoken to her so profoundly that it has given her a new-found confidence in her appearance. This is why we do theatre!

That’s amazing! The tone of the show is quite unusual – do you think that is part of its appeal and why people are engaging with it?
LM: I do, yes. Ultimately, I think it’s human nature to want to know what’s “in the box” (or, in our case, what’s behind the bandage!). This piece is something the West End has very rarely seen and that uniqueness seems to entice people.

The Grinning Man is currently playing at the Trafalgar Studios through 14 April.