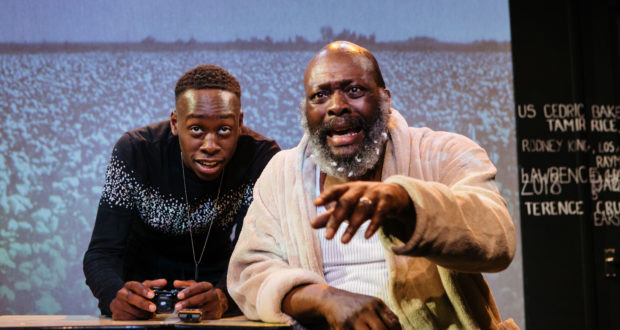 Pros: At times the most visual I have seen a play at Theatre503, and enough humour in its writing to make the two-hour running time seem much shorter.
Cons: It really doesn’t deliver on its promise of a strong social statement on the Black Lives Matter movement.
Br’er Cotton, Theatre503- Review

Pros: At times the most visual I have seen a play at Theatre503, and enough humour in its writing to make the two-hour running time seem much shorter. Cons: It really doesn't deliver on its promise of a strong social statement on the Black Lives Matter movement. Two statements summed up my thoughts at the immediate conclusion of Br’er Cotton; I really enjoyed watching Br'er Cotton, and, I’m really disappointed with Br'er Cotton. Two such contrasting statements but both absolutely true.  But that is exactly the mixed emotions that Br’er Cotton extracted as we made our way out.  The shows two-hour running time,&hellip;

An enjoyable piece of theatre that is well worthwhile, unless you really want your theatre to come with a heavier dollop of social commentary.

Two statements summed up my thoughts at the immediate conclusion of Br’er Cotton; I really enjoyed watching Br’er Cotton, and, I’m really disappointed with Br’er Cotton.

Two such contrasting statements but both absolutely true.  But that is exactly the mixed emotions that Br’er Cotton extracted as we made our way out.  The shows two-hour running time, plus interval, really did fly by and almost made the hard seating of theatre503 bearable, and if a play flies it must have plenty going for it.  But that does not disguise the disappointment that something that promised so much more on paper somehow failed to deliver.

Ruffrino (Michael Ajao) is an angry black teen, in part still a young boy, but in other ways, a man who sees all the injustice in the world.  He is absolutely obsessed by the Black Live Matters movement, wanting to fight the world and change it in the same way he fights the aliens during his online gaming sessions with cagedbird99.  Matthew, grandfather or Pops, is resigned to his lot in life, waiting for death to free him. And between the pair, Nadine (Kiza Deen), mother and daughter, working hard to pay the bills, not enough time or energy to be able to care about the revolution that Ruffrino is sure is coming.

So, let’s get the negatives out of the way first, why is it disappointing?

The walls of the theatre space are covered in names, dates, and locations. It’s not hard to quickly realise these are names of black Americans killed, along with where and when. All deaths that have been questioned as to their legitimacy.  It’s a powerful statement but one that the play doesn’t quite seem to match.  If, like myself, you are constantly looking for plays that are social commentaries and that question society, then on paper Br’er Cotton is perfect, but in reality, it just doesn’t fully deliver. Not everyone is going to be as disappointed about this, it is all a matter of what you go to theatre expecting.

So why should you go to see Br’er Cotton, what is it that made those two hours fly by so effortlessly?

Firstly, it’s at Theatre503, that should be reason enough. As for the play, there is enough humour to keep you smiling and laughing throughout, however stereotyped the characters may be, they can still make you laugh.  Trevor A Toussaint’s Matthew steals the best laughs, playing the cantankerous old man with his constant insistence he is about to die, his resigned attitude to his and his family’s, life. And for all its cliché’s the closing moments of the first half are a wonder to behold as the three family members sing and pick cotton, Toussaint again stealing the moment with his vocal performance.

Whilst the lack of the grand social statement disappoints, it does not mean that the play doesn’t say something.  In fact, where it does touch on its subject best is when it is not in the real world.  As Ruffrino escapes into his online gaming world with his online friend cagedbird99, the depth of his anger takes shape.  Even here the colour of his skin matters to him with others still demonstrating racism.  These scenes take the play into different realms and is an area that I wished was explored more.  They add a whole new dimension with the interchange between Ruffrino and Ellie Turner’s Cagedbird99, as the pair battle the aliens, their slow motion online dying, their compassion for one another, are all superbly played out, made even more impressive given that Turner plays this all in a rather restrictive facemask!

In the end, Br’er Cotton is a good piece of theatre that is well worth an evening of your time.  Just as long as you don’t go expecting it to say something profound about it’s topic, because if that is what you want, disappointment lies ahead.