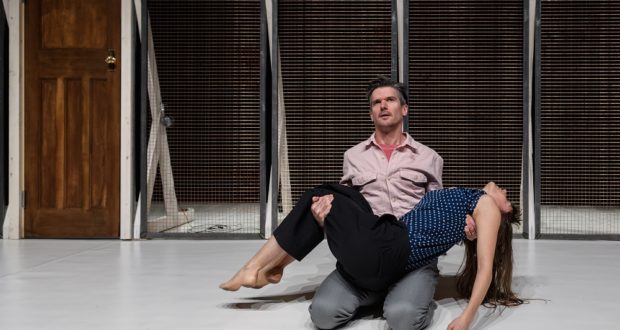 Juliet and Romeo: A guide to long life and a happy marriage, Battersea Arts Centre – Review

Pros: Very funny, entertaining, and well performed. Cons: A few scenes dragged, and some music choices felt heavy-handed. What if Romeo and Juliet hadn’t died? In Lost Dog’s latest production, they don’t. Instead they elope to Paris, have a daughter, and settle down. Except it’s not quite ‘happily ever after’. Now in their forties, their marriage is on the rocks. As a last resort they’ve decided to make a dance theatre show as a unique form of couple’s therapy. This achingly post-modern concept works because the show is very funny, intelligent, and superbly performed. Taking a wry look at&hellip;

Performers expertly blend dance and text together to tell a complex, fresh, yet universal story in this inventive piece of comedic dance-theatre.

What if Romeo and Juliet hadn’t died? In Lost Dog’s latest production, they don’t. Instead they elope to Paris, have a daughter, and settle down. Except it’s not quite ‘happily ever after’. Now in their forties, their marriage is on the rocks. As a last resort they’ve decided to make a dance theatre show as a unique form of couple’s therapy. This achingly post-modern concept works because the show is very funny, intelligent, and superbly performed.

Taking a wry look at the world of confessional talk shows and self-help speak, the show begins with the house lights up. Romeo (Ben Duke) and Juliet (Solene Weinachter) sit in bland daytime TV-style chairs and explain that they’ve tried this without an audience…and it didn’t work. The audience is needed of course, because we already know (or think we know) Romeo and Juliet. Lost Dog’s playful approach reframes the star-crossed lovers as an absurd and dysfunctional couple and it works – with Juliet snapping “you killed my cousin”, and Romeo confessing that he’d actually been just about to put the top back on the phial of poison and leg it out of the tomb when Juliet awoke. Duke brings a convincing air of hapless arrogance to Romeo, and Weinachter is magnetic. She’s a master of the telling glance, and an accomplished physical storyteller. At one point she brings to life the potion in Juliet’s veins with nothing more than a fluid ripple of her spine.

The movement sections are framed as part of the couples’ cathartic experience, and Romeo kicks things off with a lusty mooch to The Beatles’ ‘I Want You’. It’s delightfully comic to watch him thrust and strut around Juliet as he relives his initial attraction to her. Strong music choices punctuate and add drama, but at times it did get a bit too clever for me. The couple dance their first duet to (what else?) Prokofiev’s ‘Montagues and Capulets’, and occasionally Lost Dog relied too heavily on recognisable music as a shorthand way of creating theatrical moments. The music also slowed down the action.

Although billed as being 75 minutes long the show came in at 90 on press night. It could do with tightening – there were a few sections where things languished in one emotional colour long after the point had been made. Having said that, there were subtly beautiful transitions between music, movement, and speech throughout, which evidence the skill and sophistication of Lost Dog’s methods. Lying dead in the tomb, the couple shift, sigh, and turn over. Suddenly they’re spooning – a sleeping contemporary couple who’ve become too familiar with one another. When Romeo wakes things alter again, back to the morning after their first meeting and Juliet’s entreating speech about the nightingale and the lark. There were several moments where fragments of the original text emerged unexpectedly fresh, poignant, and moving.

Did the therapy work? The piece ends on an ambiguous note which might frustrate some but was haunting and memorable. Music, lighting and staging combined to paint a picture of the desperate darkness which stalks lovers who can no longer bear each other but are fated to remain together for eternity.

To find the fabulous Battersea Arts Centre, turn left out of Clapham Junction Station and amble ten minutes up Lavender Hill. A converted Victorian town hall, its authentic shabby chic is utterly charming. The bar is always buzzing with theatre lovers, and a small white wine will set you back £3.50. Surely that’s some kind of London record. A highly recommended show in a terrific venue.