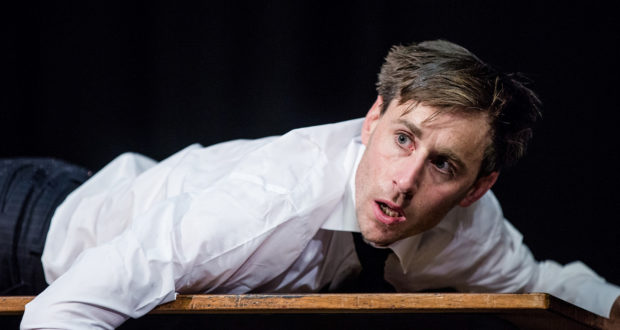 Ian Bonar in 'Be Prepared' (Photo credit The Other Richard)

Ian Bonar on the ‘Elusive’ Memory that Sparked ‘Be Prepared’

Writer/performer Ian Bonar is taking to the stage in this year’s VAULT Festival with Be Prepared, a solo show that considers the consequences of when a phone number is just one digit off. In this guest blog, Bonar discusses the real-life inspiration behind the show and the ‘treacle’ kind of comedy at its core.

I never liked Time Team. Never understood why Tony Robinson got so excited when they found another old spoon. Baldric, running across a field with such urgency as if the spoon might disappear at any second even though it had been there for, like, 200 hundred years already. What’s the rush, Tony?

But, Tony, I owe you an apology. Because I too felt that excitement when I stumbled across a little piece of history in a drawer of my Dad’s stuff after he had had died. And I suddenly understood your urgency to grab that spoon whilst you could see it, and your fear that that it might disintegrate into dust before you got there.

Because that’s what remembering feels like. I wanted to recall the sound of my dad’s voice and couldn’t. Memories are elusive. They hide away deep underground when you need them most, and then creep up on you and reveal themselves when you least expect it. And when they do appear you want to somehow capture them, because one day, like that spoon, they might begin to crumble and fall apart.

And I think that’s why I wanted to try and write Be Prepared.

I can literally hear my producer screaming at me to stop writing about death in the opening paragraph, because, you know, we want people to buy a ticket to the play at the VAULT Festival — and PEOPLE LIKE COMEDIES.

Yet, Be Prepared definitely is, at its heart, full of comedy. Just the treacle kind: black, viscous, sweet and bitter at the same time. A confusing mixture – like grief.

I always knew the show had to be funny. It couldn’t not be. The truth of death is, sometimes, hilarious. The woman finishing her mouthful of sausage roll whilst handing me a coffin catalogue. The coffin travelling on the conveyor belt at the crematorium like a prize in The Generation Game. The fact the house I grew up in had almost the same phone number as the funeral director (714844 & 714884), and that people would phone us by accident to try and finalise the details for the open casket.

Anyway, the little piece of history that I found wasn’t actually about my Dad. It was a faded, typewritten manuscript, titled The Seven Ages of Man, and when I opened it, I realised it was the one single copy of my Grandad’s memoirs.

He writes about growing up in the tenements of Port Glasgow, of his father working as a Welder in the shipyards, of riding his Raleigh Golden Arrow round the Glen Burn and of girls. It was an amazing find! And then he starts to describe being called up to fight in the Burma war, and . . . suddenly . . . I noticed that things were getting mixed up; grammar was going haywire and random words and images were appearing in the middle of sentences. It was like he was a tape unspooling or caught on repeat.

My Grandad was suffering from dementia, but he must have carried on going up to his room every day to sit at his typewriter and write his story regardless.

It was fascinating and heartbreaking and awkwardly funny to see his memories literally disintegrate on the page, and then reappear in total technicolour clarity out of nowhere. And it made me think about my Dad, about what I wanted to forget about his death and the things I desperately wanted to remember about his life.

And it made me think about Tony Robinson’s ancient spoons. How those little pieces of clay held so many stories, but were so fragile that one wrong move could shatter them and they’d be lost forever.

In the show it’s Mr. Chambers who gets the phone digits mixed up, and it’s Tom who picks up the other end.

You’ll have to buy a ticket to find out what happens.

Grab a spoon. Have some treacle.

Be Prepared is playing at the VAULT Festival through 11 February.

Previous: One Duck Down, The Vaults Theatre – Review
Next: Macbeth, The Rose Playhouse – Review