Home » Reviews » Comedy » The Here and This and Now, Southwark Playhouse – Review 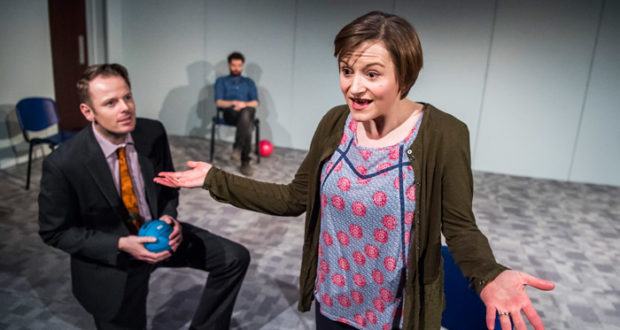 The Here and This and Now, Southwark Playhouse – Review

Cons: Very minor, but the scene changes could be more interesting.
The Here and This and Now, Southwark Playhouse – Review

Pros: Great comedic and dramatic acting, interesting explorations of theme, sparkly dialogue, and simple, intimate staging. Cons: Very minor, but the scene changes could be more interesting. The Here and This and Now is a production in three distinct parts, each quietly breathtaking in its own way. In the first part, the grey-carpeted, white-walled space of the Southwark Playhouse’s studio theatre becomes the perfect drably functional host for an ‘office away-day’. Here, a newly recruited sales team for a pharmaceutical company are taught techniques for selling their sub-par product, while engaging (with varied levels of enthusiasm) in team-building exercises&hellip;

From the dullness of the day-to-day to the dread of a dystopian downfall, this play is compelling and ominously logical.

The Here and This and Now is a production in three distinct parts, each quietly breathtaking in its own way. In the first part, the grey-carpeted, white-walled space of the Southwark Playhouse’s studio theatre becomes the perfect drably functional host for an ‘office away-day’. Here, a newly recruited sales team for a pharmaceutical company are taught techniques for selling their sub-par product, while engaging (with varied levels of enthusiasm) in team-building exercises so acutely cliché they may cause sweaty flashbacks for some audience members. The dullness of this environment is to the play’s advantage, as it becomes the negative space which adds definition to a cast of well-observed and poignantly humorous characters.

Glenn Waldron’s text is formally playful, forcing each character to repeat a pre-rehearsed sales pitch that attempts to emotionally wheedle the target into submission by using the concept of ‘everyday moments’. This catchphrase is advertising all-over. There are hints of emotional truth as Simon Darwen’s team leader Niall (who somehow manages to be greasy with no visible signs of hair product) talks of spending the day with his sick son, but by the time Becci Gemmell’s Helen (who encapsulates that Mum at the school gates whose grinning chattiness reveals a repellent loneliness) gets her chance to hilariously stutter her way through the same material, its deeper meaningless is revealed.

This absence of meaning is a point of contention between two other members of the team, the try-too-hard Gemma (Tala Gouveia) and the try-too-little Robbie (Andy Rush). Robbie asserts that the legality behind naming the drugs they peddle means that the words they use can’t “inherently mean anything”. Instead, salespeople use the language and structure of a sales pitch to take advantage of our search for a greater depth or narrative in a life that actually comprises of either bland predictability or shocking and undeserved trauma. While this is some pretty black nihilism, the scenes between Robbie and Gemma are actually played with a lightness, the two actors conveying the fun of getting to know someone who you like despite (or because of) your fundamental disagreements.

The strength of this play is its ability to follow the journey of the characters and the world they exist in to completely logical places, while still managing to be consistently twisty and unpredictable. This is most true of the second part, which ups the bleakness and the humour by placing two of the characters together in a surprising situation. Time has passed and they are living in a completely convincing dystopian future; it’s a kind of polite post-apocalypse, where everyone seems to be dying but then also “everything is just rumours” these days so who knows what to believe? Here, the sales pitch so brilliantly deconstructed in the first part, will be used to decide who lives or dies. Torture is a perfectly acceptable hard sell.

There’s a quote in the play from 2013, when Dame Sally Davies, the UK’s Chief Medical Advisor, said that antibiotic resistance is a “ticking time bomb”. By the third part, The Here and This and Now has stepped into full-on Black Mirror territory, taking something discomforting about the present and turning it into a fantastic, grim, believable future. It’s completely credible and completely overwhelming. It’s funny and humane, but violent and cold. In a truly compelling moment of theatricality, for a while the audience are left alone. Then, an ‘everyday moment’ becomes something much more.