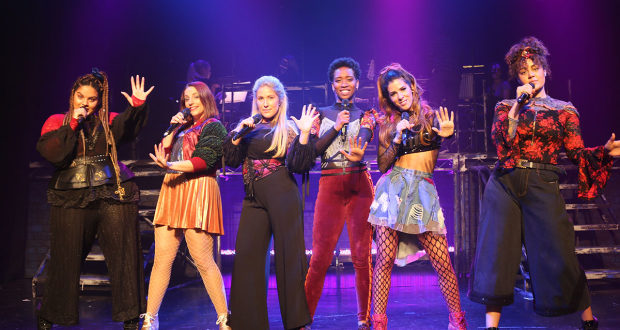 Pros: Fabulous and funny, a rave from start to finish.

Cons: Not for those just interested in a history lesson.
Six, Arts Theatre – Review

Pros: Fabulous and funny, a rave from start to finish. Cons: Not for those just interested in a history lesson. Before visiting the Arts Theatre I can’t say I knew much about the six wives of Henry VIII beyond the ubiquitous rhyme: ‘Divorced, beheaded, died. Divorced, beheaded, survived.’ In a glorious way, Six taught me that they were not only extraordinary Queens, but that they were all phenomenal women. You’d be forgiven for thinking that a musical about these women would be laced with Tudor music, period costume and old-fashioned prose – especially when entering the theatre to the&hellip;

Six unheard stories from six women known only for their man. A fantastic tale of the six Queens history left behind.

You’d be forgiven for thinking that a musical about these women would be laced with Tudor music, period costume and old-fashioned prose – especially when entering the theatre to the sound of a harpsichord. That’s what I was half expecting anyway. I’ve never been proved wrong in such an outrageously exciting way. In 21st century style these six stars stormed the theatre with blazing, slick vocals and fabulous dance moves. The first group number introduced them one by one, and left everyone gagging for more.

Throughout the course of the (sadly) short show we heard from all the Queens individually. Tales of betrayal, love and loss were sung with musical references from strong women in popular culture. The performances were flamboyant, hilarious and nothing short of brilliant. We laughed at Anne Boleyn (Christina Modestou), cried with Jane Seymour (Natalie Paris) and loved Anne of Cleves’ (Genesis Lynea) fierce resolve, and in their competition to best each other’s tragedy realised their oft untold, but incredible stories. My only criticism of the performance is that the band were occasionally too loud during the first ten minutes of the show, leaving me wanting to hear more from
Catherine of Aragon (Renée Lamb).

There was an incredibly important message through this show of astonishing songs: these women are more than just the six wives of Henry VIII, more than one word in a poem. In line with what women around the world demonstrate, they need to be seen as more than just the women that follow the story of a man and are owed more than to be ‘chosen’ and then thrown away. They are strong, they are independent, they are Queens in their own right, and for that this show is perfection.

Previous: The Here and This and Now, Southwark Playhouse – Review
Next: Cry, Blueberry, The Cockpit – Review