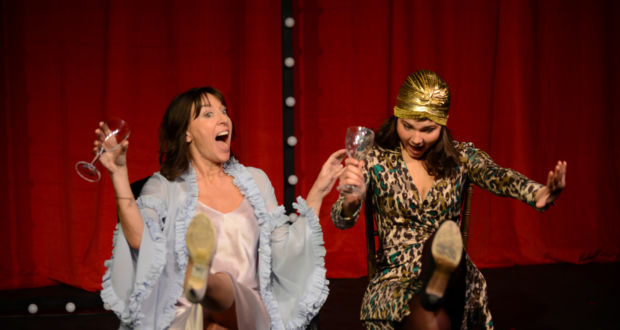 Pros: Edith Vernes. She is so expressive and such a delight to watch

Pros: Edith Vernes. She is so expressive and such a delight to watch Cons: You may need support from Wikipedia Sacha Guitry had many wives, all of them aspiring actresses who co-starred in the plays that he wrote and performed. Sacha Guitry, Ma Fille et Moi imagines another lover, one Edith Vernes (played by Edith Vernes), a comic actress of a certain age who threatens to kill Guitry when their romance turns sour, and is in turn threatened by her daughter’s ambition to tread the boards. This simple narrative serves as a framework for five short plays and extracts&hellip;

Multipurpose theatre that will leave you smiling, questioning and full of admiration.

Sacha Guitry had many wives, all of them aspiring actresses who co-starred in the plays that he wrote and performed. Sacha Guitry, Ma Fille et Moi imagines another lover, one Edith Vernes (played by Edith Vernes), a comic actress of a certain age who threatens to kill Guitry when their romance turns sour, and is in turn threatened by her daughter’s ambition to tread the boards. This simple narrative serves as a framework for five short plays and extracts from Guitry’s oeuvre.

Guitry was a very prolific writer for stage and screen, so whilst I was quite probably the least knowledgeable person in the audience, it’s also likely that very few people were familiar with every one of the works that featured. That is one of the great joys of Marianne Badrichani and company’s creations; the pleasure, and the process of discovery, continue long after the show has ended. Armed on this occasion with a very helpful programme, I scuttled off to Wikipedia to match up the various samples with the action in the play and marvel at how cleverly it was all put together.

Badrichani and Vernes (the real one, not the character!) have created a multi-layered show that reveals Guitry the man himself and provides a potted introduction to his work. There is farce with daft puns in Le KWTZ, social satire in Le Renard et La Grenouille, absurd comedy in Toa. Yet, if you took the biographical aspect out of it, you would still be left with a very funny and acute portrait of theatrical life, full of insecurity, vanity, tension and thrills. ‘You love the telephone’, Vernes tells Guitry, ‘because you get to do all the talking and you don’t have to pay another actor.’

Just as Guitry’s wives became a series of muses to him, so Edith Vernes seems to be something of a muse to Marianne Badrichani, and here she is just as effortlessly polished and comical as she was in their previous collaborations, Trois Ruptures and Dinner at the Smiths. There are other parallels with real life; is the rivalry between Vernes and her daughter, Louise, a reference to Guitry’s relationship with his own actor father? And when Edith finally passes the mantle to Louise, is there an echo of opportunity passing from Guitry’s older wives to their successors?

If the adaptation is sophisticated and slick, so too is the production, with Vernes slinking in and out of a succession of elegant, well-fitting dresses and silky peignoirs. From a pair of delicate Champagne flutes to Hildebrande’s chic little hat, everything is really quite pucker and makes the production, despite its simple staging, a treat to watch. The trio of actors, Vernes, Sean Rees and newcomer Anais Bachet, play off each other very effectively, relishing Guitry’s puns, camping it up for a suicide pact and, as the director might say, bringing more sincerity to the intense treatise on performance from Deburau.

There is something so satisfying about a show that leaves you properly entertained, significantly better informed and feeling clever, as if you’ve just deciphered some part of a tricky puzzle. This is becoming the stock in trade of Badrichani and her collaborators. Don’t let the fact that it’s in French put you off (it has English surtitles), and don’t let unfamiliarity with Guitry put you off. This is smart, funny and inventive theatre that deserves to be enjoyed beyond the francophone community of South Ken.

Previous: The Silhouette in the Smoke, London Museum of Water and Steam – Review
Next: Woman Before A Glass, Jermyn Street Theatre – Review