Home » Features and Interviews » Interview: Adrian Berry on ‘From Ibiza to the Norfolk Broads’ 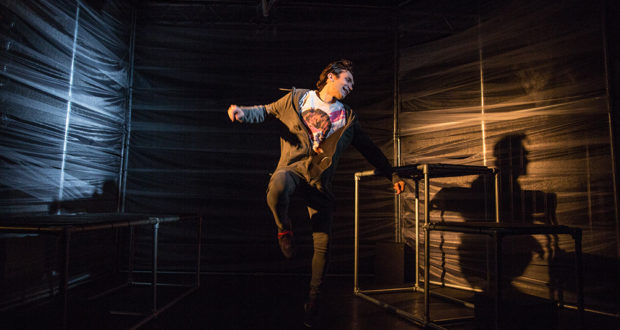 Interview: Adrian Berry on ‘From Ibiza to the Norfolk Broads’

From Ibiza To The Norfolk Broads has been on a longer journey than the one that David Bowie-obsessed protagonist Martin goes through in Adrian Berry’s play. Having started at Waterloo East Theatre in October 2016, the show has found its way up and down the country, including a stint at the Edinburgh Festival Fringe. As we enter 2018, it’s about to embark on another journey, heading out on tour before returning to London’s Jacksons Lane theatre later in March. Before it does, we caught up with writer and director Berry to talk about its inspiration, his surprise at its success and of his future plans.

‘We weren’t too sure how it was going to go,’ Berry explains about his early expectations for the play. ‘Our ambition was to get a pub theatre for two or three weeks to see how it went. Maybe it was the timing because of David [Bowie]’s passing, but it all just spiralled. We started getting interest from venues and the next thing is, we get a three-week run at Waterloo East Theatre and a 50-date tour of the UK. All before the play even fully existed! It was all a bit scary.’

During that tour, Pleasance Theatre in Edinburgh offered them a festival slot. Was that part of Berry’s grand plan? ‘We hadn’t thought about doing Edinburgh, and so when the offer came in, we just went “Oh, OK”.’ Berry struggles to put into words how he felt as the show grew, in the end summing it simply by saying the obvious, that ‘it was all just crazy’.

Whilst the title might suggest a longer journey, the play is, in fact, based almost predominately in London, following Martin through the landmarks that would define Bowie’s youth and early career. Being so London-based, there was always a worry that the show might not appeal outside of the capital. But for Berry, the worries went further. ‘The Bowie reference was always likely to get attention. There was a risk of how people would feel once they realised it wasn’t really a Bowie jukebox play. Because it’s a play about a boy with a mental health [issue].’ As both the national tour and run in Edinburgh proved, of course, those worries were completely unfounded, and the play was widely touted as one to see during its Edinburgh run.

So it’s not really a play about David Bowie or London; rather, it’s about a young boy with mental health issues using a journey to try to connect with his long absent father. But which element of the story came first?

‘The title and theme came first,’ Berry says. ‘I was listening to Bowie’s “Life On Mars” and the title just sprung out.’ (‘From Ibiza To The Norfolk Broads’ being a line from the Bowie track.) ‘I liked the idea of a boy going on a journey. Then I was out in Florida, sat in an alligator park, and suddenly I thought, “I know what it’s about, it’s about Bowie and it’s about eating disorders.” So Bowie came second, the title came first.’

From Ibiza To The Norfolk Broads found itself opening in London at the same time as David Bowie’s own play, Lazarus, a bigger-budget show that Berry saw twice. ‘I went to the second night,’ Berry explains. ‘Then I got to know Sophia [Anne Caruso, one of the stars of Lazarus], who also came to see our play, and she sorted me out with second row tickets to go again. A lot of the rest of the Lazarus cast came to see our show, and we got a good luck card from them. We didn’t need their approval, but it was nice anyway, and the fact both shows were running in London at the same time just felt good.’

One of the standout moments of the play is the use of Bowie’s “Five Years”, but not the album version that most people know. ‘There’s a whole story behind that,’ explains Adrian. ‘I went to something called Vinyl Sunday, a play back of classic albums with the people that created them. Tim Scott [an engineer who worked on some of Bowie’s albums] came with an acetate and said, “Here’s something you’ve probably not heard before,” and put that version of “Five Years” on. At the end everyone stood up and gave a standing ovation. It was shivers down the spine. I want up to him after and said, any chance of having that? I need that for my show.’

As well as the writing and the use of Bowie’s life and music, what makes From Ibiza to the Norfolk Broads so remarkable is its sole actor, Alex Walton – as Berry acknowledges. ‘I wrote it for him,’ Berry says. ‘I could hear his voice as I was writing it. I said to Alex, if he ever stopped doing it, I wouldn’t recast it.’

The show returns to London in March, playing at Jacksons Lane, where Berry is Artistic Director. But will that be the end for this show? ‘For now,’ Berry replies. ‘We really want to take it to New York, so if that came about, we’d certainly do it again. And we’ve talked about maybe in a couple of years down the line we might do another London run, but at the moment that is it.’

If the show were to return, Berry explains, ‘It would have to be Alex again. The characters go from 18 to 70, it doesn’t matter what age he is when we do it. I’m not worried he needs to look like Martin. But for now, if you come to the last night, you MIGHT be seeing the last performance.’

When asked about other projects in the pipeline, Berry mentions a past play called The Missing Boy, saying, ‘I started that, but stopped. It’s about an artist who meets a man she decides to use as an art project by going through a whole relationship with him. It was based on someone I know, as well as a French artist called Sophie Cowell, who basically stalks people and turns them into art. I was both fascinated and disgusted by it. But then it turns out it’s similar to The Shape Of It by Neil LaBute, so I just stopped. But I do think it needs revisiting.’

Should The Missing Boy get picked up again, as with From Ibiza To The Norfolk Broads, it will have a music theme running through it – ‘this time The Duretti Column’, Berry says. ‘I found their music really worked as underscoring for what I was doing. The title is actually one of their song titles.’

But before any of these other ideas see the light of day, we still have the chance to enjoy From Ibiza To The Norfolk Broads, at least until March, as it plays up and down the country from 15 January before heading back to London for its final dates.

From Ibiza to the Norfolk Broads is currently playing on a UK tour and will play in London at Jacksons Lane from 6-10 March.