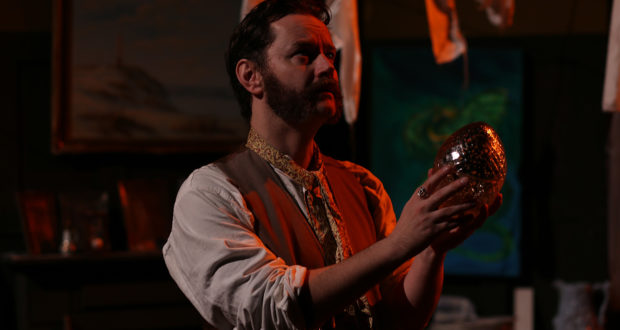 'The Crystal Egg Live' at the Vaults, Waterloo

With film and television being the predominant forms of entertainment today, older art forms – such as theatre and literature – can sometimes seem to be abandoned by the general public. In a new theatrical adaptation of H.G. Wells’ short story The Crystal Egg at the Vault Festival, however, theatre producer Rebekah Harvey is determined to show how these forms can work together to achieve something that screen entertainment cannot. Harvey, who founded The Identity Collective in 2015, is a theatrical and film producer whose past projects include the short film Aliyah and Why Not Us? at the Space Theatre. In this guest blog, Harvey discusses the disconnect between younger generations and theatre and argues its relevance as a huge resource to educate and excite young people about classic stories.

There seems to be a disconnection between the younger generation and theatre, especially among teenagers. They are now so used to film and television as a primary form of entertainment. It’s a world where everything is believable and they have to use their imaginations very little. They are now far more used to the conventions of cinema than the stage.

It’s not surprising that this is a passionate subject of mine, as in between acting and producing, I have spent a lot of time working in secondary schools, witnessing this disconnection for myself. So often, I would teach a book or a play at school and the first question students would ask me was, ‘Are we going to watch the film version, Miss?’ I also recently received anonymous student feedback and they were all unanimous in telling me that English lessons would be much better if they were allowed to watch more films!

This might cause most teachers to despair – but I see it as an exciting challenge. As a theatre producer, I actually have an opportunity to do something about this! Maybe the challenge of engaging new audiences isn’t so bad.

I like to ask myself: How do we make a text accessible? If we want children to get excited about literature again, it’s important that we can make texts come to life and use conventions that they can access. So my second question is: How do we keep some of the most exciting parts of cinema and bring it into theatre?

It is for this reason that I jumped at the chance to produce a multimedia stage adaptation of The Crystal Egg, a short story by H.G Wells. This was my chance to see if I could make a book and play come to life.

The Crystal Egg has important themes, brings up relevant questions and comes under the genre of science fiction. I know that it is an exciting text for a group of year nines to sink their teeth into.  However, I also know that if I handed a group of students the book to read in class, about 50% would stare out of the window and the rest would add to their collection of doodles at the back of their books. It’s disheartening – particularly since I know it is a world they would enjoy if they gave it a chance.

Perhaps if they walked down a starry corridor, met the people of Seven Dials, saw the Crystal Egg face to face and were stimulated by surround sound and visuals, maybe, just maybe, the world of H.G Wells would suddenly become exciting. Maybe it would spark enthusiastic discussions about the text and make the H.G Wells’ themes live. Maybe they would even want to go back and read the book for themselves.

This is the kind of experience that I want to create for them. Theatre can be a powerful tool to help teenagers access literature if it is done well.

I love literature and theatre, but I also love film and have always found it an incredibly exciting art form. Maybe it’s time to embrace some of the things that we have learnt from film and use it to our advantage. I understand people’s fears about moving away from traditional forms of theatre and the need to keep certain practices alive. I also understand the need for to children to read texts and not just rely on film versions.

But I can’t ignore the fact that if you ask your average teenager and 20-something if they enjoy television and film, the majority of them will say yes. Sadly, in my experience, if I talk to my students about theatre, most of them will tell me it’s boring, or they will come back from a show and tell me that it didn’t make much sense.

One of my biggest passions is to make theatre accessible to people that wouldn’t normally go to the theatre. By that I mean that anyone could come to the show and understand what is going on, and most of all, enjoy it! I’m not interested in seeing long, over indulgent monologues or a minimalistic stage set in this particular production. I certainly don’t like creating work that is highbrow, pretentious or obscure. What I love about film and television is that it doesn’t really matter who you talk to – everyone will watch it. I would love to create theatre that everyone can watch.

My aim is not to create a gimmicky show that seems like an artistic compromise just to sell tickets. It’s to fuse cinematic music, lighting and a filmic style of acting into theatre. At the same time, The Crystal Egg is not trying to be a film; we have to accept that this is not a film that we are making, and that is in our favour. This stage show allows the audience to actually walk around Seven Dials. The audience can feel the shop fronts and the ground beneath their feet. They can taste the food and drink sold by the street sellers. They can hear the music played by the buskers. And then they will watch a drama unfold, like they are flies on the wall invited into an intimate family home. My hope is that this experience is even more exciting than sitting in a darkened room watching a screen for two hours. Perhaps it is more like walking around the set of a film and watching the characters inhabit it, with all five senses stimulated? Perhaps it is a step above film.

The real test will be if any of my old students come to see it!

The Crystal Egg Live is currently playing at The Vaults, Waterloo, through 13 January.