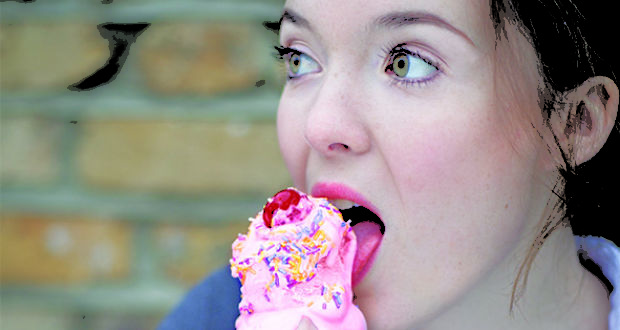 After a run at the White Bear Theatre in early 2017, Fabricate Theatre is taking their debut production of Jack Thorne’s Bunny to the Tristan Bates Theatre. The solo show consists of sixth-former Katie’s fast and furious account of a hot afternoon in the streets of Luton, providing a controversial insight on sexual initiation and casual racism. Here, Fabricate’s artistic director Catherine Lamb, who also plays Katie, explores the reasons behind Thorne’s rough lines and how she hopes to highlight the play’s relevance for younger generations.

Katie is confused and doesn’t seem to quite know what to do with herself. Living in the concrete jungle that is Luton, she has learned that addressing someone by their skin colour is normal and discovering her sexuality can be a temporary antidote against loneliness.

One day, after a silly scuffle, she’s sucked into a car chase and suddenly compelled to observe and scrutinise the people around her. When the adventure comes to an abrupt end, she isn’t left unscathed.

Receiving its debut at the Edinburgh Festival Fringe 2010, Jack Thorne’s early work gained immediate success, winning a Fringe First award before embarking on a UK tour. The following year it arrived in London at the Soho Theatre, where Catherine Lamb was in the audience. Being the same age as Katie at the time, the show had a strong impact on her. ‘Seeing Bunny was a huge inspiration to me,’ she recalls, ‘and it definitely was a show that I passionately wanted to produce.’

Years later, Lamb felt the need to form her own company, Fabricate Theatre, and Bunny appeared as the perfect play to mark its debut. ‘One of the first reasons for starting my own company was to create work myself, for myself, my contemporaries and my friends, who are also actors,’ she explains. ‘[I wanted] to take control of my career and produce the sort of work I wanted to be involved in.’

According to Lamb, the casting opportunities for her age bracket are quite limited, with many great roles reserved to more mature performers. ‘That’s a problem if you want young people to be engaged in theatre and go to the theatre, because they’re not really in it,’ she observes. ‘That’s why the ethos behind [Fabricate Theatre] company is to create work for a younger audience, so that they feel represented and involved.’

Pinned against a raw suburban landscape, Bunny touches topics close to youngsters in their late teens, sparking criticism for the use of a language that normalises racism and classism. Because of this, Thorne’s work has often been accused of promoting division in society, a point of view that, for Lamb, has been hugely misinterpreted. ‘I think he absolutely does not promote it. Instead, he exposes it, highlights it and shows it as a massive problem within our society.’

Lamb believes that the playwright makes his character say inflammatory things to challenge the audience, and his words therefore shouldn’t be considered as expressing a personal viewpoint. ‘But people do believe these things, people do say those things in a casual way, so why not make the audience a little bit uncomfortable?’ she continues. ‘Then they may have to look at themselves, people around them, and how they interact with different communities.’

Katie’s brazen speech, however, is only one of the challenges faced by Lamb during this production, which had its first run at the White Bear Theatre in March 2017. Due to the nature of the L-shaped auditorium, the actor had to constantly keep the audience engaged on both sides, which, according to some critics, made the monologue appear frantic. ‘The Tristan Bates is front on, so it’s a different staging,’ she explains. ‘We’ve learned along the way that maybe it doesn’t need to be quite as physical as it was to begin with. The words can now be allowed to stand alone because I don’t have that need to keep moving so that everyone can see me.’

Being the only person on stage, she must also make sure that each character is appropriately depicted. ‘All [the audience has] is you, and there’s a lot of characters in the play,’ she elaborates. ‘You really want the audience going to see all of them and where they are.’

Thankfully, director Lucy Curtis is there to keep her focused on the true purpose of the play, which is to raise sympathy for the protagonist despite her dreadful statements. ‘I think the main thing is that – even though Katie is really, really flawed – the audience have to fall in love with her anyway, otherwise you can’t keep the audience with you,’ she reveals. ‘Lucy’s direction has always made sure that there’s this lack of awareness and innocence with Katie, when she says these awful things. She absolutely made sure that you have to like Katie, otherwise the play doesn’t work.’

Lamb is also benefitting from a longer rehearsal period, in which she also has to juggle her commitments as a show producer. ‘Both [rehearsing and producing] are important – but then, ultimately, if I didn’t focus enough on the rehearsals the play wouldn’t have been turning [out] very good.’

Talking about Fabricate’s future projects, the artistic director expresses a keen interest for ‘developing plays from scratch, that maybe come from young people for young people,’ and she admits to have already received a large amount of scripts. Although she doesn’t see herself as a potential playwright just yet, she explains that she’s used to working with new writing and considers the collaborative development of the script as a natural part of her artistic practice.

Before I say goodbye to her, I ask if there’s anything at all she would like to add, and she launches an appeal to all the six-formers and twenty-something that normally don’t go to theatre. ‘I saw this play when I was 19,’ she urges, ‘and I’d love other people of that age now to come to our production and see what they think.’

Bunny is playing at the Tristan Bates Theatre from 15-27 January.

Previous: The Crystal Egg Live, The Vaults – Review
Next: Interview: Jonathan Kydd on ‘Doodle – The Musical!’