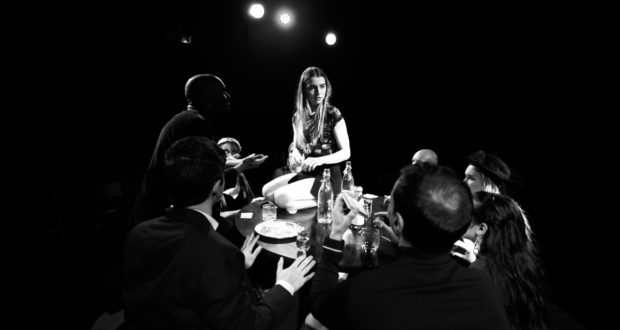 Pros: The set and the auditorium layout are different from anything I’ve seen before.

Cons: Some of the scenes are quite obscure.
Alice, Landor Theatre -Review

Pros: The set and the auditorium layout are different from anything I've seen before. Cons: Some of the scenes are quite obscure. At the time when Lewis Carroll's Alice in Wonderland was celebrating its 150th anniversary, the BBC made an enlightening, yet controversial, documentary about his near-obsessive fondness for children. Supported by extensive archive material and several expert interviews, the feature shows the author's peculiar relationship with childhood, which emerged into his subversive writing style, as much as in his fixation for photographing children, often naked. In Three Trees Theatre's devised play, these allegations are assumed to belong in&hellip;

Three Trees Theatre delves into the allegations of Lewis Carroll's controversial relationship with children: interesting but rough around the edges.

User Rating: 3.45 ( 2 votes)
At the time when Lewis Carroll’s Alice in Wonderland was celebrating its 150th anniversary, the BBC made an enlightening, yet controversial, documentary about his near-obsessive fondness for children. Supported by extensive archive material and several expert interviews, the feature shows the author’s peculiar relationship with childhood, which emerged into his subversive writing style, as much as in his fixation for photographing children, often naked.

In Three Trees Theatre’s devised play, these allegations are assumed to belong in the public domain, although every effort has been made by the author’s heirs and supporters to discredit them. Personally, I wasn’t familiar with the topic and my understanding of the play would have benefitted from an introduction – whether embedded in the plot itself or written on the program.

Set in modern times, the play highlights the real existence of the novel’s main character as Alice Liddle, but refuses to give a final statement, leaving the story on a cliff hanger and focusing, instead, on the very timely topic of female vulnerability, especially at a young age. Meeting her neighbour Lewis Carroll (Malcom Jeffries) whilst on a search for her lost rabbit, 16-year old Alice (Maja Laskowska) forms an unseemly friendship with the charismatic man, attracted by his charm and influential position. Whilst he starts taking photos of her, she longs to enter his close circle of friends and insists in taking part in his private birthday party.

Gathered around a slowly spinning round stage, the audience is witness to this drugs-and-booze-fuelled party, where seven guests sit at the table, playing “Never Have I Ever” and Cards Against Humanity. This long phase has a strong element of improvisation and is vivaciously performed by a credible cast, who ensure it’s fresh and entertaining.

Suddenly, there’s a knock on the door and, to the general amazement, young Alice walks in, introducing herself to the guests. Despite all of them having initial objections to her presence in the room, nobody bats an eyelid when she helps herself to the coke or clutches a bottle of wine. Inevitably, things start going wrong and the spectators are left to decide in whose hands lay the responsibility for the young and impressionable girl’s participation in such wicked games.

Similarly to the original Victorian novel, during her journey of initiation, Alice shares short vignettes with each character individually, whom appear to have resembling features to their better known counterparts. This element, however, only became clear to me when she faced Peter/the Caterpillar (Fraser Wood), as the other cast members blew smoke at them. Marked by an abrupt change in lighting, these brief interactions add an interesting layer to the plot, but need to be more obvious. This would benefit those viewers who might have read the book in their childhood and don’t remember it in detail.

In times when the knot between power and sexual abuse has never been so tight, yet openly exposed, Alice opens up to the challenging perspective that Carroll’s intentions were not candid and acquires contemporary resonance for the many comparisons that can be made in our days.