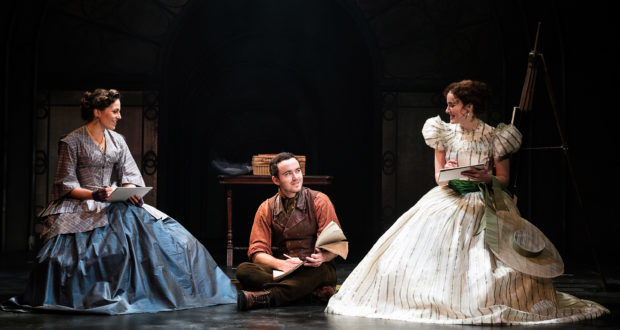 Cons: Whilst the songs carried the narrative reasonably well, nothing stood out to make it a truly great musical.
The Woman in White, Charing Cross Theatre – Review

Pros: A superb cast and straight forward set design allowed the story to breathe. Cons: Whilst the songs carried the narrative reasonably well, nothing stood out to make it a truly great musical. I first saw this musical when it premiered in the West End at the Palace Theatre in 2004. After 13 years, I can still remember the distracting visual effects which dogged the production. It proved to be a rare 'flop' for Andrew Lloyd Webber, running for nineteen months in the West End and three months on Broadway. Such is Lloyd Webber’s confidence and clout that it&hellip;

Our Verdict: One of the great Victorian stories is finally enhanced by song in this entertaining, revised musical.

User Rating: Be the first one !
I first saw this musical when it premiered in the West End at the Palace Theatre in 2004. After 13 years, I can still remember the distracting visual effects which dogged the production. It proved to be a rare ‘flop’ for Andrew Lloyd Webber, running for nineteen months in the West End and three months on Broadway. Such is Lloyd Webber’s confidence and clout that it has undergone a number of makeovers, and this latest revision is now playing at the excellent Charing Cross Theatre.

Based on Wilkie Collins’ 1859 novel, it tells the story of Walter Hartright, whose life is changed after a chance encounter: a woman, all in white, desperate to reveal her chilling secret. When he takes up his position as drawing master to the beautiful Laura Fairlie and her half-sister, Marian, he sees in Laura’s face an eerie reflection of the forlorn creature he met previously. Walter and Laura’s feelings for each other are thwarted by her engagement to the sinister Sir Percival Glyde. What is the connection between, Laura, Sir Percival, and the woman in white? Can true love prevail?

Bearing in mind previous controversies involving set design, visuals in this production couldn’t have been simpler. The set consisted primarily of two sliding panels to represent the transition between scenes. But it was all the better for it as the simple design allowed the story to develop without the clutter of complex visuals. The compact performance area and clear sightlines also heightened the interplay between characters. Vocal harmonies were tight and moved comfortably between the songs, which were pleasant and witty but relatively lightweight. There were no showstoppers or hit songs that so often characterise Lloyd Webber musicals. If anything, the score is heavily reminiscent of Phantom of the Opera and in my head sung All I Ask of You or Music of the Night. But if the good Lloyd Webber can’t rip off his own songs, who can?

The wonderful cast were on sparkling form and made for easy listening. The female leads were stunning in their respective roles: Carolyn Maitland as Marian, Anna O’Byrne as Laura and Sophie Reeves as Ann were all note perfect. Ashley Stillburn as Walter also sang beautifully with the girls on several numbers, including I Hope You Like It Here, Trying Not to Notice and I Believe My Heart. However, they were pipped to the post by Greg Castiglioni as the treacherous Count Fosco. Greg soared up and down the scale with ease, particularly in You Can Get Away With Anything. Overall, it was the type of production one would expect from Lloyd Webber, although the songs were crying out for a big number which never quite happened.

Previous: The Passing of the Third Floor Back, Finborough Theatre – Review
Next: Alexandra Spencer-Jones on Music and ‘The Lost Boy Peter Pan’