Home » Features and Interviews » Interview: Alex Kanefsky on ‘Once Upon a Snowflake’ 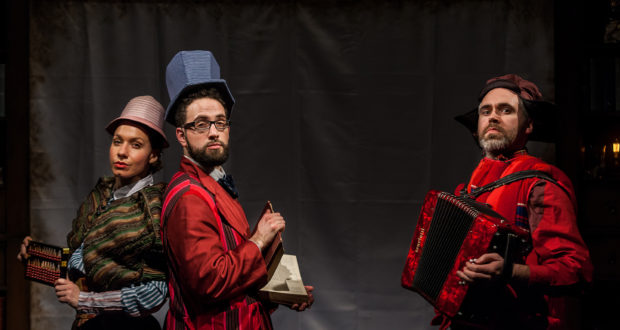 Paper Balloon's 'Once Upon a Snowflake' at the Chelsea Theatre

Interview: Alex Kanefsky on ‘Once Upon a Snowflake’

Children’s theatre company Paper Balloon is bringing a mystical adventure to the Chelsea Theatre this holiday season, as the troupe presents the Anglo-Russian inspired Once Upon a Snowflake. The Anglo-Russian inspired original tale blends shadow puppetry with storytelling and songs to tell the tale of a young girl’s disappearance – and the tiny Winter Sprites who have something to do with it. We caught up with Paper Balloon artistic director Alex Kanefsky to chat about inspirations, favourite moments of the show and the importance of creating new theatre to spark up children’s endless imagination.

Theatre for younger audiences is so important for the development of their imagination. What keeps you inspired to create and be involved in pieces that excite the little ones, but also entertain the adults?
I was lucky enough to be exposed to theatre from a very young age. Some of my earliest memories involve sitting in the dark, open-mouthed, watching magical things happen on the stage in front of me.

I often think if I can recreate some of those moments of wonder that transport young people’s imaginations, then I’m doing something that feels worthwhile. Kids are so open to possibility that it allows for so much freedom in creation – I find that really inspiring. But equally, it’s really important to us that we create the kind of theatre that we want to see: ours is theatre for whole families to enjoy together. My favourite moments are when two or even three generations laugh together at the same time.

Tell us more about Once Upon a Snowflake and your inspiration for the piece?
A couple of years ago, we were put in touch with a brilliant Russian artist called Maria Litvinova, based in Moscow, who worked with [former Paper Balloon Co-Artistic Director] Katie Boon on an artistic exchange project. Over various email conversations and lots of Google translate, we hatched the idea for the show from a story of Maria’s about a little Elf that hid in a General’s boot during the Napoleonic wars . . . it sounded kind of crazy – and had massive appeal!

We got the funding to fly Maria over to London for research and development and started to play, during which time the mythology of ‘Sprites’ began to solidify. We loved the mixture of Anglo-Russian culture that we were creating – it felt quirky and kind of different, and the piece just grew from there.

What is your favourite moment in the show and why?
Without giving too much away, there is a section in the show that is completely different each performance, as it’s completely led by the audience. As performers, it keeps us on our toes and means we have to respond imaginatively to kids’ suggestions – which of course are often completely unpredictable! It keeps things fresh and is enormous fun to play.

Do you remember going to the theatre as a youngster? Do you have a favourite moment from those days, and how do you think that has influenced your work?
There are a couple that stand out: The Puppet Barge Theatre would travel down the Thames to Oxford over the summer, and I fell in love very early on with the beautiful marionettes in that amazing tiny boat – I think I’ve loved puppetry ever since.

As a teenager I saw a performance by Peepolykus about two men who fell down the back of a sofa. There was a moment where, with a simple gag with a tie, the entire audience perspective shifted – so that the two actors were standing on a wall, looking down at us. It was so simple, so funny, and yet it blew my mind. That moment in a way encapsulated everything that I think theatre should be.

Tell us more about Paper Balloon and how the company came about?
We came together about seven years ago, like so many companies – as friends looking to just put on some work. I wrote a play called Night Light, inspired by a story of Katie’s about friends who flew to the moon on a Paper Balloon. We were so excited by the process of collaborating and devising that we decided to formalize as a company in 2012.

We love making and telling stories with magic, laughs and a little bit of absurdity, so theatre for young people just seemed a natural fit. We’ve decided that we want to fill the gap in the market for original stories in family theatre, so we only create new writing.

What do you hope that the audience takes away from the performance?
Firstly, we just want everyone to have a great time with us.

But we’d love it if the show inspires children to look differently at falling snow – or to see the creative possibilities in a hat and scarf – or to sit down (or run around) with a friend or someone in the family making up a new story, or telling a favourite tale.

Once Upon a Snowflake is currently playing at the Chelsea Theatre through 22 December.