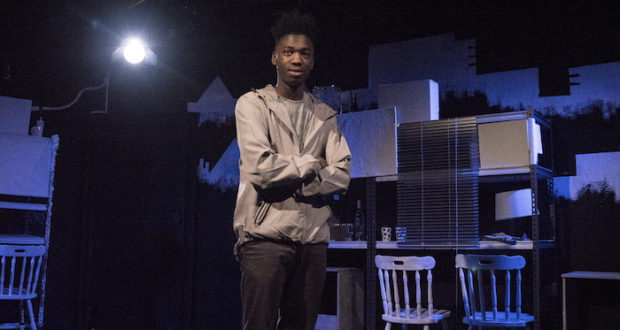 Pros: Witty script, tight direction and a strong, able cast. Cons: Lacklustre set design. 'My father’s family name being Pirrip, and my first name being Philip… I came to be called Pip.' So begins this adaptation of Dickens’ tale of a life transformed by a mysterious benefactor, in a perfect echo of the original. But this Pip is a 16-year-old black kid with an Eraserhead haircut – high on top and shaved at the sides – and rather more attitude than Dickens’ orphan. Streetwise, but easily confused by the demands made on him, he lives in a council flat&hellip;

A vibrant updating of Dickens’ story of a life turned around.

‘My father’s family name being Pirrip, and my first name being Philip… I came to be called Pip.’ So begins this adaptation of Dickens’ tale of a life transformed by a mysterious benefactor, in a perfect echo of the original. But this Pip is a 16-year-old black kid with an Eraserhead haircut – high on top and shaved at the sides – and rather more attitude than Dickens’ orphan. Streetwise, but easily confused by the demands made on him, he lives in a council flat with his mother, Police Constable Jo Gargery; and this is a subtle twist on the original, in which Joe Gargery is a kind blacksmith, the husband of Pip’s cruel elder sister.

Following Dickens’ plot, we’re guided through Pip’s encounter with the East European mercenary Magwycz, the reclusive Miss Havisham and her ‘insulting’ daughter Estella; through Pip’s salvation by an unknown benefactor, his mentoring by Mr Jaggers, his friendship with fellow law student Herbert Pocket, and his enmity for Pocket’s friend Bentley Drummle. It’s a thoroughly modern updating of the story, retaining all the main characters and story elements while necessarily trimming away a lot of Dickens’ extraneous material.

Joshua Asare, fresh from the National Youth Theatre, is confident and convincing as Pip, an ingenue consistently baffled by the twists and turns his career takes. The other actors all play double roles: Sarah Thom is excellent as the world-weary Jo Gargery, although her Miss Havisham could perhaps have done with a touch more Maggie Smith and a little less Worzel Gummidge. Maryam Grace distinguishes neatly between the homely friend Biddy and the cutglass Estella, even if it isn’t clear due to lack of costume change which character she’s about to be; Liam Bewley is imposing as the professor, Jaggers, and beguiling as the killer Magwycz. Christopher Goh is cheery, loud and affable as Herbert Pocket, and Peter Wicks makes a robust, muscular fist of Jo’s suitor Orlick – but his Bentley Drummle has the foppish ways of a 19th-century dandy and seems to belong in a more traditional production.

The cast also double as scene shifters, manipulating the set’s two tables and four chairs to create a variety of locations – Jo’s flat, Pip’s Pimlico apartment, a pub, an Italian restaurant. But, because most of them also play two characters, it does lead to confusion: when the actors appear between scenes, you don’t know if they’re there as one character or the other, or simply to shuffle the furniture about.

The writer, Tom Crowley, has taken a vast, sprawling novel and distilled it into a script that’s tight, witty and occasionally sparkling. There’s a fair amount of humour, especially in the second half, but at nearly two and a half hours you need the gags to keep up the pace.

Normally I’m averse to writers directing their own work, but Crowley has done a near-perfect job here. The cast is choreographed to glide effortlessly through the set, creating the chaos and confusion of Victoria Station and, in a superb montage sequence, conveying the passage of Pip’s years at law school. The opening scene manages to conjure up the atmosphere of a graveyard through the simple technique of Pip peering down to read the names on the graves: this is assured, confident direction.

Plays staged in rooms above pubs have tight budgets, of course, but in this case the set – industrial shelving filled with bottles and boxes, all painted white – is unnecessarily tawdry, with the mismatched cardboard squares mounted at random conveying neither the poverty of Jo’s flat nor the sophistication of Pip’s.

But, overall, this is an ingenious, relevant updating of Dickens’ novel played by a strong cast, resulting in a confident ensemble production.