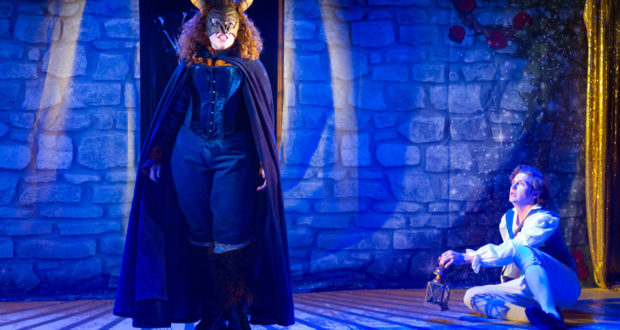 Pros: Some of the comedy material is pure gold.

Cons: With a late start and two acts, don’t expect to leave the venue before 11pm.
Beauty and The Beast: A Musical Parody, King’s Head Theatre – Review

Pros: Some of the comedy material is pure gold. Cons: With a late start and two acts, don't expect to leave the venue before 11pm. There is a strong argument behind Fat Rascal's Beauty and the Beast. Seeing the latest cinema rendition of the classic tale marketed as taking a feminist approach, the young theatre company can't help to point out that things aren't as rose-tinted as they seem. Yes, Beauty reads books and invents a donkey-powered washing machine, but she is also compelled to fall in love with a man that held her captive and is totally unattractive. According&hellip;

A classical tale gets a farcical makeover and a feminist rewriting in this riotous musical.

There is a strong argument behind Fat Rascal’s Beauty and the Beast. Seeing the latest cinema rendition of the classic tale marketed as taking a feminist approach, the young theatre company can’t help to point out that things aren’t as rose-tinted as they seem. Yes, Beauty reads books and invents a donkey-powered washing machine, but she is also compelled to fall in love with a man that held her captive and is totally unattractive.

According to the company, the best way to create a truly feminist plot is to gender-swap the characters and see if the dynamics between them still work the same. The outcome is a musical parody where Beauty becomes Beau and the Beast appears as a very hairy woman with a snout. Is the charming youth going to fall in love with her despite the beastly looks?

In this revisited version, Jamie Mawson shines as the naïve – and slightly thick – Beau, combining solid vocals with a delightful stage presence. His mellow voice and priceless comedic value are the spine of this 90-minute fast-paced extravaganza that would have worked well even without an intermission.

Despite being called upon to cover a remarkable number of supporting roles, the ensemble nails the timing of this roller coaster where a few costume malfunctions are overlooked in favour of the entertainment provided. Some jumbled transitions are well integrated into the action and a very responsive audience didn’t seem to suffer from the delayed start, overrunning 15 minutes behind the stated 9.15pm.

A special mention goes to Allie Munro, whose performance as Beau’s mother, Maureen, Lumie and others never fails to get the audience in stitches. Her singing is well polished and her stamina enviable.

Hard to tell which song was my favourite. Some of the well-known Disney hits have been corrupted into much more entertaining versions and combined with James Ringer-Beck’s original tracks. ‘Have a Brunch’ falls into the first category and displays at its best Fat Rascal’s signature play on words, full of wit and unpredictable innuendos. A few technical issues with a microphone risked spoiling Nicola Chang’s live keyboard accompaniment, but the cast assertively carried on performing and I imagine the problem was resolved during the interval.

Waiting for the show to commence, I saw a gentleman snoozing on a chair at the adjacent King’s Head pub. Considering the late start, this is an expedient worth considering, provided that it helps to recharge the batteries before this riotous farcical pastiche, that uses top-notch screwball comedy to highlight serious gender-related issues.