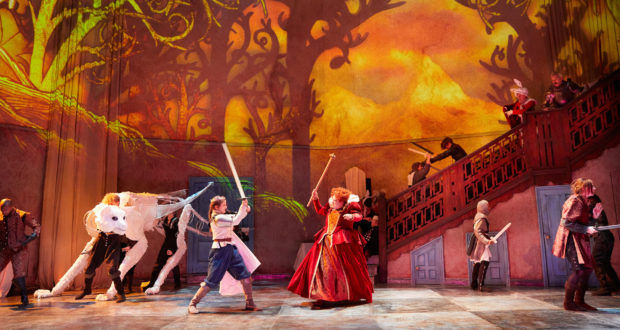 It’s been 152 years since Lewis Carroll’s Alice’s Adventures in Wonderland first graced bookshops, and the novel has since become a quintessential part of childhood. The world’s seen countless adaptations of Carroll’s tale, including Tim Burton’s larger than life film adaptations and Matthew Bourne’s ballet interpretation of the classic tale of adventure, curiosity and all around madness. Now, Alice is crawling back down the rabbit hole — this time swapping Wonderland for Winterland — in Alice in Winterland, which is currently on at the home of family off-West End theatre, Rose Theatre Kingston. We caught up with actress Susannah van den Berg about her performance in the show as Aunt Margaret and Queen of Hearts, her inspiration and some backstage secrets.

How is the show going so far?
Really well. The Rose is such a lovely theatre to play and we’ve had some incredibly welcoming audiences. Alice in Winterland features an adult cast of five working alongside a youth theatre cast of 52 (split into two teams). It’s great for us, as we see different faces every show.

What attracted you to the role?
It’s an incredible part. So liberating to play, because she has so few behavioural boundaries — one minute you can throw a tantrum, the next you can be ridiculously silly. I’ve seen Christmas shows at The Rose before so I knew it would be a high quality production. When I auditioned, the script (by Ciaran McConville) was brilliantly clever and very funny and the original songs (by Eamonn O’Dwyer) outstanding.

Winterland is the theatrical take on Wonderland & Through the Looking Glass. How did it come about?
The original Lewis Carroll novels are quite abstract, and I know the creative team were keen to create a real adventure story that children and adults alike could really invest in. So, in this version, set against the backdrop of World War I, we follow Alice in what’s essentially a coming of age story. Her adventures in Wonderland help her to deal with what’s happening in her reality. Winterland also allows there to be a festive element to the proceedings — you may see some carols, some penguins and some snow along the way.

You’re no stranger to the musical. Why this one?
The Queen of Hearts is an absolute gift of a part and, knowing the creative team a little, I knew the quality of the production was going to be great. I’ve recently spent 15 months in a habit (playing Sister Mary Patrick in the UK Tour of Sister Act directed by Craig Revel Horwood) so I also had the allure of an incredible dress!

What was the biggest difference between portraying Aunt Margaret and the Queen of Hearts?
We wanted to make Aunt Margaret quite three dimensional, rather than a “nasty Aunt”. She’s a woman who has just lost her sister and is doing what she thinks is right by taking Alice away from her father to finishing school. She’s not evil. The Queen, on the other hand, has been corrupted by absolute power. She’s an outrageous despot, which gives you full licence to be as big and brash as you like. Wonderland is a strange land where cats smile and rabbits talk . . . you can be a bit more ethereal and less literal with your acting choices.

What’s been your inspiration behind your portrayal of your characters?
For The Queen, I’ve actually looked at real life dictators — Kim Jong-un or Joseph Stalin, for example. What would it feel like to have absolute power? Many of my songs have an operatic slant to them, so I’ve also thought about how a diva would behave.

What does it take to get into character?
Coffee! No, seriously, in terms of The Queen, the dress, wig and make-up do an awful lot of the work for me. You can’t help but feel outrageous when trussed up in all that regalia. The role is quite vocally demanding, so I’ve had to look after myself and do a rigorous warm-up.

The Alice in Wonderland & Through the Looking Glass feature films were both reputable successes with Helena Bonham Carter as Queen of Hearts. Did you feel any pressure bringing this role to the theatre?
Not especially. I haven’t really thought about it, to be honest. Of course it’s an iconic role, but the material is brilliantly written in Alice in Winterland and I just tend to get on with playing the script that I’ve been given, rather than superimposing character traits from other productions. When you have lines like ‘off with their heads’, there will always be the familiar about that character for audiences without really trying, so you can then work to put your own stamp on the part.

What’s been the best part of the production?
For me, the people I’ve been fortunate to work with. A stunning creative team, terrific professional actors and, above all, the members of the Rose Youth Theatre. They are dedicated, focused, creative, fun, charming and I’ve learnt so much from working with this group of young people. I’ve also especially enjoyed working on the final epic battle scene with Lyndall Grant (fight director) and Yvonne Stone (puppet director). It’s not often that women get such dynamic fighting to do — and in what other production could I fight a Bandersnatch?

Alice in Winterland is currently playing at Rose Theatre Kingston through 7 January.

A journalist by day, en route to study Creative Writing at Open University. An aspiring novelist, screenwriter and playwright, B.L. Sherrington is penning a fantasy novel and co-writing a play, in between writing screenplays and short stories. B.L. first became a theatre fanatic when Mother Sherrington led the way to the Globe Theatre and it's been love ever since. Since then, Sherrington has developed an addiction to live theatre, be it plays or musicals. Whether experiencing new shows, re-watching the classic Phantom of the Opera or writing a stage production, B.L's future lives on stage.