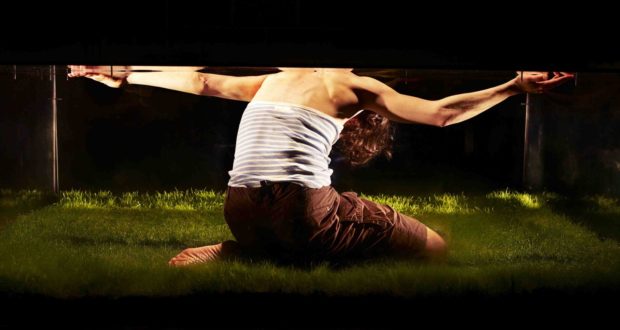 A one-of-a-kind concept, where dance and physical performance create a live art installation.

User Rating: Be the first one !
Under Glass is a performance open to interpretation. Described by its authors as “at once museum exhibit, gallery and medical laboratory” it feels like a live art installation, where eight individuals are being observed for the limited extent of their human nature.
Audiences are admitted into a barely lit space, where cushions and stools have been aligned on a semicircle. An arrangement of Bizet’s Habanera for string quartet accompany the beginning of the show, where different spotlights reveal in turns the presence of five characters, all individually confined into a glass container.
There is a young woman with a green day dress and heavy boots. She is pacing back and forth inside her see-through cage, staring into the distance and looking anxious. She is a wallflower pinned to the background, interpreted by Maëva Berthelot.
Not far from her, a man (Sam Coren) is sat in his office. His box isn’t tall enough for him to stand up properly and, when something drops in front of his desk, he struggles to fetch it, to the point that his trousers fall down in action.
Centre stage, a much larger cabinet contains a skinny woman (Elisabeth Schilling) in a black silk evening gown. She sits and watches outside, often striking a pose and suddenly standing up, before taking her seat again, like a nervous spectator.
Beside her, a middle-aged woman (Sarah Cameron) with an apron tied to her waist and perfectly permed hair is inside a test tube. She is on the phone to someone, spitefully commenting on the decline of her village. The only talking character, her words belong to a poem called Village, purposely written for Clod Ensemble by Alice Oswald.
In the foreground, one more person appears unexpectedly close to the front row. It is a woman trapped inside a jam jar (Sachi Kimura) and barely able to move. Throughout the performance, flashes of light show her daring positions becoming more and more contorted.
The choreography is enigmatic and the soundtrack intriguing, whilst the meaning of the characters’ confinement becomes gradually clear and increasingly disturbing. All of them are isolated in a numbing loneliness, trapped into their own limitations and relating to their condition is uncomfortably easy.
Halfway through the 45-minute running time, a long moment of silence is followed by the stewards’ flashlights, that attract our attention to the opposite side of the room. There, a young girl (Silvia Mercuriali) is lying on a patch of grass, inside what looks like a tank for a spider. She tries to push the lid unsuccessfully, she seems in distress, and her fingers sink into the grass.
One more prompt from the stewards and we change room, where we find a man and a woman (Hayley Charmichael and Riccardo T.) sharing a round mattress inside a life-size Petri dish. We gather around them to watch how they deliberate over the space they need in a silent and sensual dance.
Throughout the performance Hansjörg Schmidt’s exceptional lighting shapes and crops the bodies against the background with unforgettable visual effects. The wallflower’s profile, for example, is the last visible feature of a body sinking in darkness, lit by an intense orange glow, and slowly disappearing.
Offering a single interpretation of this highly metaphorical work by Clod Ensemble is a pointless task. Under Glass should be regarded as a multi-mediatic artwork able to send a very personal message to each spectator.
Director: Suzy Willson
Composer: Paul Clark
Producer: Clod Ensemble and Sadler’s Wells
Booking Information: This show has now completed its London run and embarked on a tour.
Bizet Clod Ensemble Hackney Showroom Pul Clark Sadler’s Wells Sam Coren Slider String Quartet Suzy Wilson Under Glass 2017-11-01
Marianna Meloni