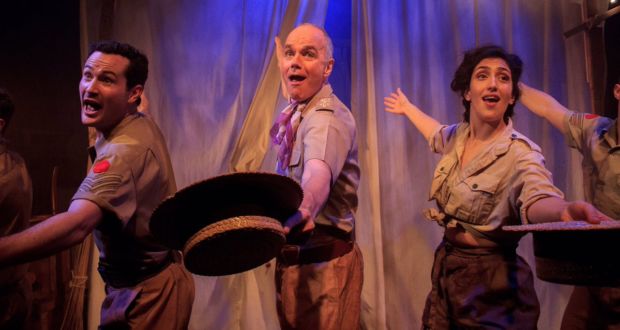 Cons: Due to new building design, most of backstage is above you, resulting in the odd distracting thump and shadow.
Privates on Parade, Union Theatre – Review

Pros: Funny plot, great songs, lots of bellyaching laughs. Cons: Due to new building design, most of backstage is above you, resulting in the odd distracting thump and shadow. I used to love going to the old Union Theatre. Not only did it have one of the best cafes in Southwark, it never failed to produce a great night of musical theatre. After incredible community support a few years ago, the venue survived its stay of execution from investor wrecking balls and flourished, but sadly had to eventually close its doors last year. Fret not, as it reopened in&hellip;

A fabulous and flamboyant farce overflowing with feel good factor.

I used to love going to the old Union Theatre. Not only did it have one of the best cafes in Southwark, it never failed to produce a great night of musical theatre. After incredible community support a few years ago, the venue survived its stay of execution from investor wrecking balls and flourished, but sadly had to eventually close its doors last year. Fret not, as it reopened in a bigger and better space just across the road. This was my first time visiting the Union Theatre in its new guise and, while keeping the heart of the Union intact, it’s glorious. The warm and inviting bar and cafe area is perfect for those pre- and post-show drinks, and the theatre itself is such a lovely open space. Keeping to its musical roots, the theatre’s current production is Peter Nichols’ classic farce Privates on Parade. What can I say? It’s camp with a shiny capital c!

You wouldn’t expect a show set in the Far East just after the war, with characters who spend most of their time trying to dodge bullets from Malayan communists, to be funny – but it’s a total hoot! Nichols drew heavily on his own personal experiences to write this show, which follows the hilarious antics of the (fictional) Song and Dance Unit South East Asia, who have to entertain the British troops to keep morale up. Nowadays you have the likes of Cheryl Cole or Rita Ora heading out to Afghanistan, but in the late 1940s it was a very different world. Nichols spent some of his time in the armed forces with comedy icon Kenneth Williams, and you can really notice the latter’s influence over the two fun acts; I felt like I was watching a stage adaptation of a Carry On film.

The cast of nine hunky men (who are often topless, FYI) and one fabulous woman are delicious. The hilarity, and most of the heartfelt poignancy, is all thanks to Simon Green’s wonderful portrayal of the crossdressing Terri Dennis. Green owns every inch of the stage and is mesmerising in this lead role. His Marlene Dietrich had me in stitches and still has me chuckling now. He follows this up with equally fabulous turns as Carmen Miranda and Vera Lynn. Green’s flamboyancy is off the charts, but the feather boa tossing is also matched with some truly heartfelt moments, like when we hear about Terri’s lost lover, and some of the later scenes with Sylvia. The main protagonist in the plot is Steve Flowers, played by Samuel Curry, who finds himself placed in Terri’s entertainment unit which is overflowing with gay soldier actors. Curry isn’t particularly strong and I felt he was acting by numbers in certain parts. I also found the love story between Steve and Sylvia totally unbelievable. I just didn’t connect with it, despite it being such a crucial part of the plot and all-important twists towards the end. Martha Pothen’s Sylvia is a delight; as the only woman in a show teeming with hunky men, she is a dazzling diva. Paul Sloss as doe-eyed Len Bonney is comedy gold, showcasing some of the best facial expressions I’ve seen in a long while. Callum Coates as the stiff-upper-lip Captain Flack is wonderful, and Tom Pearce puts in a great performance as Bishop. Matt Hayden as the frightfully British and overly twee Eric Young-Love is good fun, as is the dashing Tom Bowen’s portrayal of Kevin Cartwright. Matt Beveridge gives a stellar performance as homophobic Reg Drummond. Mikey Howe as Lee is the show’s silent weapon. All in all, a very tight ensemble beautifully directed by Kirk Jameson.

Privates on Parade is billed as a comedy, but don’t be fooled; it has a very serious heart and some strong messages.