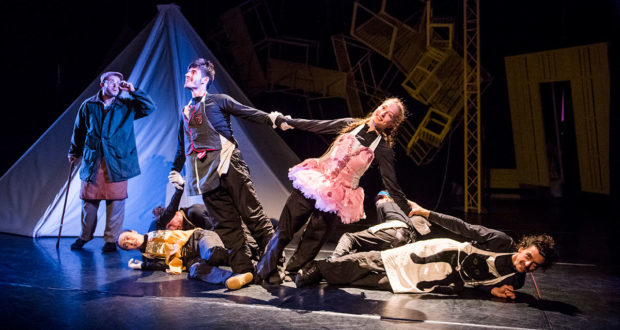 Cons: Too long for comfort, and the story is unclear.
Pinocchio, Sadler’s Wells – Review

Pros: Impressive theatrics and moments of brilliant choreography. Cons: Too long for comfort, and the story is unclear. I first saw Jasmin Vardimon’s work when she was an emerging artist at The Place in the early noughties. I can still recall the stand-out moment, when video projection technology was used to create the illusion of a beating heart being carried from one place to another. In Pinocchio the same technology is used - this time to create the illusion of a fire - and again it is one of the stand-out moments, drawing gasps from the audience. In that&hellip;

90-minutes without an interval and eighteen chapters make the production difficult to follow. Although there are magical moments, the piece feels self-indulgent and exhausting.

I first saw Jasmin Vardimon’s work when she was an emerging artist at The Place in the early noughties. I can still recall the stand-out moment, when video projection technology was used to create the illusion of a beating heart being carried from one place to another. In Pinocchio the same technology is used – this time to create the illusion of a fire – and again it is one of the stand-out moments, drawing gasps from the audience. In that sense, Vardimon’s work has not changed much. What is different now is that she is clearly well funded, with premises in Kent, and a range of education and outreach projects on offer. Money is evidenced everywhere in her staging of Pinocchio, in that every single idea is achieved, but rather than creating theatre magic, the abundance of technology ultimately makes for a tiring experience.

Young children were milling around excitedly prior to this half term matinee performance, but it commenced with a surprisingly curt (and naïve) announcement requesting that they be ‘encouraged to visit the bathroom’ before the show began. Pretentious programme notes stated that Vardimon’s work is full of moments when you ‘transcend any thoughts of being entertained’. Right. I found myself wondering: is this a show for children, or not?

Loosely based on Carlo Collodi’s original book ‘The Adventures of Pinnochio’, the story follows Pinocchio from his construction, through self-discovery, to finally becoming a real boy. Along the way, there are moments of sparkling choreography – Uros Petronijevic as the Fox does a mean Charleston, all louche and loose limbed. When he is joined by the Cat in spatz they make a terrific double act, ducking and weaving mischievously. The movement potential for the marionettes could be explored more. Suspending the dancers on ropes enables the images to go into the weightless realms of cartoonish possibility. But there is no time for that – things move on too quickly to an entirely unnecessary group section performed to Beyonce’s ‘Crazy In Love’. There are nods to Jim Henson – the narrator’s face conjured from six undulating hands is straight out of ‘Labyrinth’ – but this sometimes fails to register in the large space and I found myself searching the set for the intended focus. Two charming magical creatures are created from dancers’ feet, with a nod to Walt Disney when they share a string of spaghetti, but again this goes nowhere. At times, the production is dream-like, at others it is a relentless barrage of images and ideas. At around chapter fifteen, things get scary, with very loud sinister music, and a troupe of donkey-headed figures being bullied about the stage. A couple of families made for the exit.

This production pulls out all the stops, with lights, ropes, harnesses, masks, projections, fabrics… I could go on. But amongst an ever-changing stage set, one thing that does not change convincingly is Pinocchio. His emotional journey is overshadowed by too many diversions, and although the story narrates his growth into a real boy, as he learns emotions such as fear and anger, this isn’t explored through his movement vocabulary or characterisation. When he was reunited with his father for the finale, after a dramatic separation, I didn’t feel moved – it was all a bit wooden.