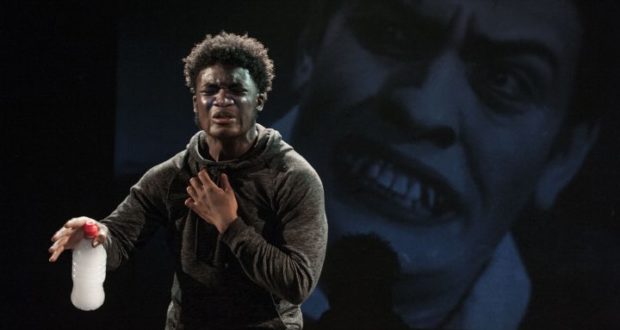 Pros: An energetic and engaging ensemble explore air pollution through various theatrical devices. Cons: The content is didactic and there's little narrative to keep us engaged. Fog Everywhere is the headline production of Shoot The Breeze, a fortnight of work at the Camden People’s Theatre that seeks to address climate change and the environment. Getting straight to the point, this production focuses on possibly the most important aspect of our environment, the air we breathe. Fog Everywhere is the product of collaboration: The Lung Biology Group at King's College London provides world leading research into the damage London's air&hellip;

Fog Everywhere is the headline production of Shoot The Breeze, a fortnight of work at the Camden People’s Theatre that seeks to address climate change and the environment. Getting straight to the point, this production focuses on possibly the most important aspect of our environment, the air we breathe. Fog Everywhere is the product of collaboration: The Lung Biology Group at King’s College London provides world leading research into the damage London’s air is doing to us; students from Westminster Kingsway College provide their unique voice on the subject and boundless energy in their delivery of it; Camden People’s Theatre, producing in-house, is tasked with working this into a satisfying and entertaining night at the theatre.

The production’s greatest asset is the warm company of its young ensemble. These are sincere, enthusiastic and often very funny performers. The enjoyment they’re having onstage is infectious. Greeting the audience as we arrive, talking and playing games with us, involving us in the back-and-forth and in-jokes of their banter, the fourth wall takes a kicking from this lot and it’s a real pleasure to see their personalities shining through the cracks.

What it lacks is a narrative arc, or even an engaging framing device to tie together all the disparate scenes. The theme that ‘London’s air is incredibly polluted and this is a very bad thing for the humans that breathe it’ is certainly a disturbing thing to ponder, but once the show has revealed this at the start, we aren’t shown much that challenges this idea, or us. What we do experience is a party bag of different theatrical sketches, some more successful than others. A herd of cows singing a cappella is particularly amusing, a piece of anxious physical theatre sat in chairs is particularly tiring.

I’ve already forgotten all the didactic facts about pollution fed to me throughout the show, but what I won’t forget are the moments when the ensemble revealed what they’re really passionate about: music, family, books, the places they’ve called home, how a place becomes their home. I won’t forget the playful joy as more and more smoke was sprayed into the intimate theatre, nor the rap battle that I initially thought would be cringe-inducing but actually turned into something poetic and expressive.

The final, post-apocalyptic image is particularly affecting. It hints at a different production, where these characters we have so much empathy for might have experienced some conflict, some drama. As is, it’s still very nice to meet them.