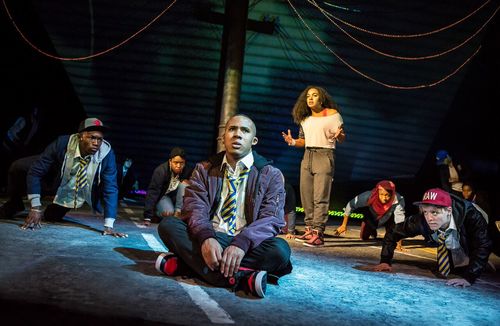 Pros: Urgent, complex theatre. A large cast of young people who are genuinely joyous to watch in their support and commitment to the giant demands of the play.

Cons: The sinister realities of the play will sit with you long after the show… but it is worth it.
Cookies, Theatre Royal Haymarket – Review

Pros: Urgent, complex theatre. A large cast of young people who are genuinely joyous to watch in their support and commitment to the giant demands of the play. Cons: The sinister realities of the play will sit with you long after the show… but it is worth it. Cookies, a new play by Emily Jenkins, hits a nerve… or several. Being a ‘millenial’ myself, a term in which I am sick of hearing, comes with throwaway comments about ‘young people on their phones’ so frequently. The world needs more thoughtful and useful,explorations of the digital culture in the 21st&hellip;

The result of excellent script-writing matched with a visually stunning set, Cookies thinks about the rapidly- changing technological scene, and how it is affecting our young people and their relationships in the 21st century.

User Rating: 4.29 ( 3 votes)
Cookies, a new play by Emily Jenkins, hits a nerve… or several. Being a ‘millenial’ myself, a term in which I am sick of hearing, comes with throwaway comments about ‘young people on their phones’ so frequently. The world needs more thoughtful and useful,explorations of the digital culture in the 21st Century, and Cookies provides one. Following a handful of interlinked characters, the play takes real-life experiences taken from workshops with young people and explores the tricky consequences of cyber-space. The two leading threads follow Eva (Cristal Cole), a victim of a revenge-porn type of scenario, and Salena (Rujenne Green), who finds herself thrown into an unbelievable situation wherein one of her closest e-friends is a member (and recruiter) for ISIS.

The show is visually stunning. A large cast of young actors support the lead characters in a hive-mind. A lot of the show is told through choreographed physical movement. The diverse and talented ensemble work in absolute harmony, and it was exceptionally moving to watch the group support the show in absolute communion. Having young people on-mass in the show supports the themes the production is exploring; the problems facing young people in the digital age are affecting thousands… maybe tens of thousands. But likewise, the attitudes young people are met with can also be frustrating. Being pigeon-holed and assumed to be an ignorant, or somewhat a less sensible, generation is frustrating. Cookies brings life to individual, but relatable instances.

The ISIS plotline is particularly harrowing. Jenkins writes the story with terrific empathy. Witnessing how Salena is being groomed by an already recruited friend is terrifying. It starts gently with a supportive, inquisitive friendship, and steadily gets more manipulative. The story is told without heavy-handed judgement or bias. It’s heart-achingly sad and complicated. Every motive and reason behind the character Rayah (Shala Nyx), and how she ended up in such sinister circles is communicated with terrific thoughtfulness. The show encourages empathy in this way; to get behind the motives of an individual often won’t lead to pure evil, but a path that would make sense if we took the time to think about it. It doesn’t make it any less horrifying, but it must be a better starting point for us to work from.

The visuals of the show are creative and flatter the concepts of the writing. They help to keep the pace, which is essential with scenes involving large amounts of people on a small performance space. The set is unusual: an empty road, a sloped stage. These elements contribute to Cookies being a show that is unlike one I have seen before. It is inventive, which helps to get across the complexity of the play’s motives.

The main cast are an inspiring bunch of individuals. The boys, Makir Ahmed, Bradley Cumberbatch and Joe Pierson, in particular, perform the tribulations of being a teenager with true commitment. They all have this tension beneath the surface, magnificently acted, that throws forth the tricky emotions they are feeling: the responsibility of being a friend, conflicting with the need to be accepted or ‘cool’ (am I uncool for using the word cool?). The girls’ stories lead the plot of the show, and Cole, Green, and Nyx perform with an effervescent energy that really demonstrates that their main motives are just to get through the drama of a day, however big or small the outcome might be.

I would strongly recommend seeing Cookies, should it receive a more permanent home, because it is a good play. More than this, it sets the very purpose of theatre in its responsibility to engage, alight with the most visceral empathy.