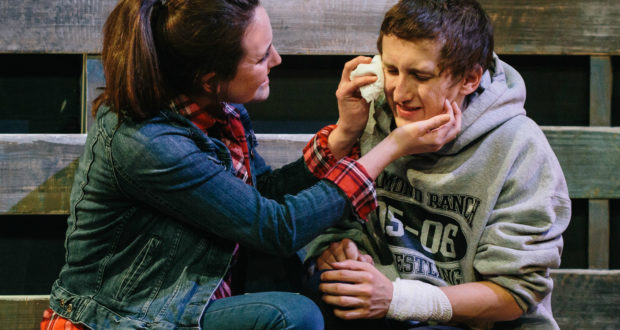 Pros: A well-loved classic that is brilliantly appropriated to communicate a very current crisis with heaps of emotion delivered by a strong cast.
Cons: The stage set-up is not quite to the standard of the drama.
Twist, Soho Theatre – review

Pros: A well-loved classic that is brilliantly appropriated to communicate a very current crisis with heaps of emotion delivered by a strong cast. Cons: The stage set-up is not quite to the standard of the drama. Oliver Twist is a British great: founder of the phrase ‘Please, Sir, I want some more,’ which many of us have used to demand more pudding as a child (it can’t be just me, right?). It’s a nostalgic tale for multiple generations, and its simplicity forms the backbone for Twist at Soho Theatre, an adaptation of the classic aimed at people aged thirteen and&hellip;

Twist successfully takes the complexity of the Syrian refugee crisis and condenses it into one human experience. The approach makes for an emotional and thought-provoking show that is not too hard to comprehend, moving to watch and which suits its younger target audience.

User Rating: 3.88 ( 2 votes)
Oliver Twist is a British great: founder of the phrase ‘Please, Sir, I want some more,’ which many of us have used to demand more pudding as a child (it can’t be just me, right?). It’s a nostalgic tale for multiple generations, and its simplicity forms the backbone for Twist at Soho Theatre, an adaptation of the classic aimed at people aged thirteen and over.

The plot follows the life of Abdo, a Syrian refugee child. Naturally, it is a harrowing and dark tale following Abdo from the moment he flees Syria, to his arrival in a UK rife with uncertainty and an unrelenting lack of welcome. Abdo is trafficked to the UK and is burdened with a sense of obligation to the sinister circle he is forced into.

The cast are a strong ensemble who, with the exception of Abdo, play a number of roles, switching into a variety of personas seamlessly. The sense that Abdo is being passed from pillar to post is evident as a cast of four perform with the stage presence of a cast of twenty. Director Natalie Wilson choreographs slick scenes that depict Abdo’s journey to the UK. These are really standout moments of the play: the quickness and faultless movements of the actors depict anonymity, which adds to the sense of confusion. Jordan Bamford exudes vulnerability, and plays younger than his age extremely well. In all scenes he hits just the right note to move the audience, his performance enhancing the emotional nuances of the script.

In one sense the show simplifies the refugee crisis, in the condensing of it to into a single experience, but for the target audience this is a successful approach. A complex political crisis is boiled down to one notion: there are young people who want nothing more than to escape their war-torn homes and find solace, but they are often seen as a million other sinister things.

Rebecca Hamilton’s depiction of Nancy, a familiar from the original story, is a committed and emotionally charged performance. In one sense she wears her heart on her sleeve but in reality, she must perform an act to survive, similar to the classic Nancy we know from the novel. It was encouraging to see the character not just performed as a typical maternal character, but one that discredits the stereotype of young people in certain areas of society who are often judged as troublesome.

There are a couple of technical elements that bring the show down a notch. The staging is a little confusing; the stage furniture is made of crates, presumably to create a shipping-container sort of feel, and a sense of temporality. I get the concept, but it all looks a little bit like garden sheds, and the rear set pieces are not quite high enough to cover actors getting ready for their next cues. The show is of a high standard; it’s a shame to be pulled out of the momentum of a great scene by this oversight.

Twist is well worth watching and I hope that when it tours it gets the target audience it deserves, and in great numbers. Twist efficaciously takes a crisis that is extremely complex for young people to comprehend, and reduces it to relatable emotions and circumstances. I attended press-night armed with an awesome tweenager I had borrowed from a friend. She wouldn’t agree to write my review for me, but she didn’t open her Maltesers so I know she was thoroughly engrossed!

Previous: A Day by the Sea, Southwark Playhouse – Review
Next: 31 Hours – The Bunker, Review