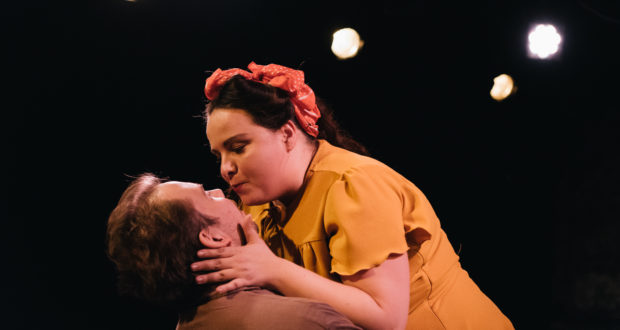 Pros: There’s something very magical about seeing an opera in such a small space and immersing yourself in the music.

Pros: There’s something very magical about seeing an opera in such a small space and immersing yourself in the music. Cons: Some theatrical tricks employed here might be better left for the big stages. This new reworking of Giacomo Puccini’s opera Tosca, by Becca Marriott and King’s Head Theatre artistic director Adam Spreadbury-Maher, is set in Paris during World War Two. Painter Marius, played on press night by Martin Lindau, has agreed to hide a Jewish man who has escaped from prison. Unfortunately, Marius has already attracted the attention of Nazi officer Scarpia (Przemyslaw Baranek), who also happens to&hellip;

While it doesn’t deliver a dramatic overhaul, this is a compelling new take on Puccini’s passionate work.

User Rating: Be the first one !
This new reworking of Giacomo Puccini’s opera Tosca, by Becca Marriott and King’s Head Theatre artistic director Adam Spreadbury-Maher, is set in Paris during World War Two. Painter Marius, played on press night by Martin Lindau, has agreed to hide a Jewish man who has escaped from prison. Unfortunately, Marius has already attracted the attention of Nazi officer Scarpia (Przemyslaw Baranek), who also happens to have the hots for Marius’ girlfriend, the titular opera singer Tosca (Philippa Boyle).

The King’s Head Theatre is, among other things, known for its accessible, small scale operas, and this was the first time I had had the pleasure of attending one. On many fronts, I’m absolutely on board with the concept. The experience of being so close to the singers and musicians that the sound washes over and envelopes you, is very special. Also, it’s bloody nice not to have to crane your neck to read surtitles. On the other hand, there are some things you can get away with in a huge theatre like the Coliseum, that just don’t work when the audience is sitting within spitting distance. The contrast in a scene where Marius is supposedly tortured half to death (off stage, thankfully), then belts out a victory song at full force is quite jarring at such close range. There’s also an elaborate set change between the second and third act, which feels strange and unnecessary in this otherwise understated production.

This much abridged version clocks in at two hours, including an interval. The pacing is uneven, but overall this is a pleasantly up tempo production that’s perfect for those of us who don’t have the inclination to sit through long, repetitive arias. The cast of five are good, with a passionate, standout performance from Boyle, who not only has a big and beautiful voice, but also excellent comic timing. I had some concerns about Baranek as Scarpia in the first act, where he seemed a bit too reserved to pull off the role, but was relieved to see him find his inner psychopath after the interval.

The reimagined operas at the King’s Head are meant to introduce new audiences to the joys of the genre. It is perhaps questionable whether they always succeed in that; on this particular evening, the audience was firmly middle aged and middle class looking. It can’t be denied, however, that this a worthwhile pursuit, and combined with their commitment to paying everyone involved in their productions a fair wage, you can’t help but feel that Spreadbury-Maher and Co. are not making life easy for themselves. Then again, things worth doing seldom are easy. So even if you’re not tempted by this particular production, do add this lovely little theatre to your ‘to do’ list. It’s places like these that work towards a better theatre every day.

Previous: Interview: Tania Mathurin on ‘The Comedy About a Bank Robbery’
Next: Hansel and Gretel, V&A Museum of Childhood – Review