Home » Features and Interviews » Interview: ‘Hair the Musical’ at The Vaults 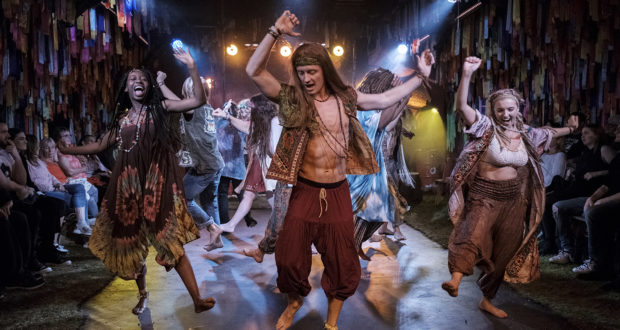 Interview: ‘Hair the Musical’ at The Vaults

The musical Hair first graced the stage in New York in 1967 and immediately shook the theatre world with its controversially frank depiction of sexual liberation, drugs, and the hard realities that people, particularly young men, were dealing with during the Vietnam War. It’s now been fifty years since Hair stormed New York, and after a successful run at the Hope Mill Theatre, Manchester, director Jonathan O’Boyle, armed with a cast of long-haired hippies, is bringing the show back to London at The Vaults theatre. Hidden away beneath the commuter-commotion of Waterloo station sits a colourful space of peace and freedom that transports you straight back to the age of love. We caught up with O’Boyle and the Hair cast to learn more about the rocking revival and why this 50-year old musical is now more relevant than ever.

You first directed this show in Manchester — what was it about the show that made you want to bring it to London?
This year is the 50th year since Hair opened in America. I grew up with Hair, with the soundtrack, and the original album. I knew and loved the music but I’d never seen the show, or read it. I knew the story and the Vietnam War through line, but it was the music that really spoke to me, and it hadn’t been done in Manchester before so it felt like the right time. The Hope Mill Theatre in Manchester had just opened, so we thought why not do one massive, ambitious revival, and revive it for a northern audience. They thrive on and crave musical theatre, so we gave it a go, and it went alright!

Do you feel like you’ve pulled any specific aspects of the show to fit what is going on at the moment? I’m trying to avoid the T word!
Weirdly, we opened last year the day after Trump was elected. I don’t want to give the beginning of the show away, but we had to redesign bits of the show, as we had designed it thinking Hilary Clinton would be president. What Trump is doing with the threat of nuclear war in North Korea, his attitude to gay, lesbian and transgender people, the military, women’s rights and equality . . . it’s bonkers that everything that is so present in his world and politics is present in Hair. It’s what these characters are fighting for — and it’s 50 years later. It makes me mad.

It should be a period piece by now.
I get goosebumps thinking about it. It makes me so angry that the things that are in the show just haven’t been resolved. Some things haven’t even been anywhere near talked about. We had a conversation about keeping it period, do we make it modern, or what do we need to do to make it fresh? But, actually, the audience understands that looking through the prism of these people fifty years ago.

Actually, the message has not changed — it is more powerful now in 2017. The situation in the world is getting worse. The climate a year ago, when we last did the show, was better than it is now. Obama was president. Now all bets are off. The show is getting more and more pertinent as that man [Trump] gets more crazy. In a really sad way it is good for the show, as it shows that it is timeless. Maybe, sadly, the world, and the people in it, it’s all cyclical.

Let’s do it again in another fifty years and see! Have you worked at the Vaults before?
The vaults is many spaces. We are using two of them, and we have created a bar.

Thank you!
Yes, the bar is good. People can chill and have a nice experience before the show. A lot of theatres now, the overall experience of theatre is questionable in certain places. We thought, ‘Why not make a whole experience?’ It is a fantastic venue, and the show fits the theatre, in the design, and transports the audience. You can’t quite believe you’re in a tunnel under Waterloo station on Lower Marsh.

I want to talk a little bit about the music — you have a live band?
We do! We have keys, percussion, drums, bass and two guitars. It is quite stripped back from what people might expect from people might be used to from the Broadway version, for example. There’s no brass. I think it’s a bit sexier, a bit more rock’n’roll. The sound is still amazing, but it isn’t like a massive orchestra, which is good for this kind of room.

Hi! Tell me about your character in the show.
Claude is sort of the centrepiece of the show, but it is very much an ensemble show. It’s all about everybody, as a group, but the main plot works around whether Claude goes to war or not, or whether he stays with the hippie tribe.

Does being in an ensemble change the way you approach a role?
Absolutely. We have to be connected as a group all the of time. It’s sort of the message of the show really, that we work better together. Especially because the space is so small and the audience is so close, if anything was to go wrong it could be a nightmare! We all really look after each other, and we have worked really hard in rehearsal to make sure that we work together and have that ensemble feeling, and to figure out how a tribe would work together.

Is it a good space to be in? It looks incredible! (We are surrounded by tipis and more cushions than I have ever seen in one place in my life.) Have the rehearsals been fun?
It’s been amazing. We have such a lovely group of people. It’s lovely to come into this space every day. It’s exhausting because the show is so action packed, but because of what is around us it just gives you that extra bit to keep going.

This is quite an immersive show. Does that affect how you are with the audience? Are you quite interactive?
KW: The theatre has really helped that [sense of intimacy]. We use three sides of the room and two of them are directly in the [audience’s] space. You can choose where you sit, so it doesn’t have to be that immersive if you don’t want to, but we do get quite in there with them!
KS: For us, our journey to work is though this . . . Woodstock, bark on the floor with lanterns everywhere. I don’t feel like I’m walking into a box office, I’m walking into this world that we are creating together.

It’s like you’re all accidentally method acting! Do you go home and feel a bit cheated and expect there to be tipis?
KW: Lying in a bed rather than a tipi! That’s not okay.
KS: We have to become so much a part of that world when we are on stage, so this all just helps us so much. We live it for two and a half hours a day.
KW: It’s such a specific world, and they were real people, and we have to take care of that.

The show was controversial at the time. How does that translate now — do you fuel your approach with anything that is going on in our current political climate?
KW: It is still very relevant. It is a sensitive thing for me. I live in London and it’s scary, it’s such a scary world now. Fifty years on, nothing has changed that much.
KS: The director has been quite clever in making references. It’s not possible for an audience to leave that theatre feeling like the problems in the show were left fifty years ago. It’s impossible because it is too cleverly done. And we have to wonder how we are still doing this to our world.

You can’t have Hair without crazy! Tell us a bit about your character.
I’m playing Berger, who is the fun leader of the tribe. He likes to bring the fun and the craziness, and he is all about the bring peace and love. He isn’t perhaps as active in the political side of things, but he goes along with it. He is best friends with Claude and wants Claude to stay with them when it comes to deciding whether to join the army.

It’s such a good show — it has stood the test of time, but it doesn’t feel like a period piece. Do you agree?
Definitely. The political climate at the moment is terrifying. We are in such an uncertain time and this show just shows how much happiness and love can change everything, but as people we still don’t go by it.

It’s such a fun show, but with a dark side to it.
It shows you reality. It shows you what actually happens and what happy, oblivious world you can live in and not damage anything or anybody and just be happy — but yet the system and the government might make you do what you don’t want to do.

Hair the Musical is running at The Vaults through 13 January 2018.