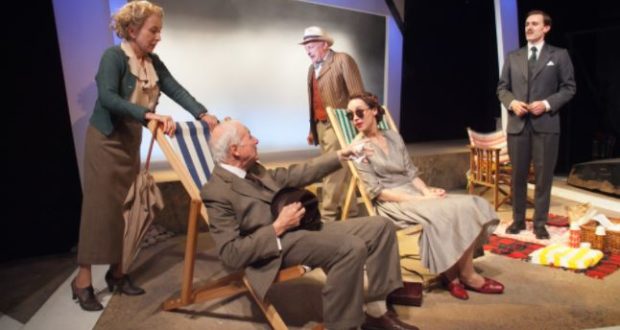 A Day by the Sea, Southwark Playhouse – Review

Cons: Fails to fully resonate; an historical piece opposed to work that relates.
A Day by the Sea, Southwark Playhouse – Review

Pros: Strong performances, effective direction and an interesting glimpse into middle-class life in 1953 post-war England. Cons: Fails to fully resonate; an historical piece opposed to work that relates. In 1953, N C Hunter’s A Day by the Sea opened at the Haymarket with Ralph Richardson, Sybil Thorndike and John Gielgud – who played and directed – amongst the company. It went down well, tackling the hopes and fears of audiences through characters that questioned their own purpose in a post-war Britain: a subject matter guaranteed to resonate well with the middle-class audiences of that era. The story follows work-obsessed&hellip;

Another London revival of work that might once have been thought a masterpiece, but now may fail to engage a younger audience.

In 1953, N C Hunter’s A Day by the Sea opened at the Haymarket with Ralph Richardson, Sybil Thorndike and John Gielgud – who played and directed – amongst the company. It went down well, tackling the hopes and fears of audiences through characters that questioned their own purpose in a post-war Britain: a subject matter guaranteed to resonate well with the middle-class audiences of that era.

The story follows work-obsessed diplomat Julian Anson (John Sackville) who takes a break from his work base in Paris to make a rare visit to his mother, who lives at the beautiful family home in Dorset. He is disconcerted to find an old childhood friend also visiting with her children, her life now blighted by scandal. His mother, heartily sceptical about politicians meddling in foreign affairs, would like him to calm down and get married. A family picnic on the beach might be just the thing, but even there a work colleague brings him news he had not expected to hear.

Specialising in bringing back, “…forgotten theatrical masterpieces”, this is Two’s Company’s most recent revival and fourth time at the Southwark Playhouse. With Hunter often referred to as the ‘English Chekhov’ the work does have a certain Chekhovian flavour. Naturalistic in style, the story plays out on a simple but effective unit set designed by Alex Marker. Costumes (Emily Stuart) offer a glimpse into the epoch; I for one am a fan of the 1950s look and so for me they were a pleasure.

Performances for the most part are strong, with memorable work from Susan Tracy as Laura Anson and David Whitworth as Laura’s aged brother-in-law, David Anson. I saw Whitworth last as Mark in In the Bar of a Tokyo Hotel at the Charing Cross Theatre – he never seems to disappoint with beautifully pitched theatricality. Tricia Thorns’ direction is effective, successfully communicating the thematic elements of self-important politicians and the wide-spread scepticism about their performance.

I’ve been asked to critique several revivals recently, and always leave wondering why work that has spent years collecting dust is suddenly worth dusting down and producing. Thematically, A Day by the Sea might strike a chord with audiences but it feels dated – it is dated. One can find relevance in anything, but personally, I’m not sure what the fuss is about. I didn’t feel any familiarity with the 1950s middle-class characters, nor would I describe this work as a “theatrical master-piece”, at least not compared with other work of the same ilk or with contemporary theatre that deals with the same thematic elements. My younger contemporaries don’t generally connect with this genre of work, making Two’s Company’s offering one for older audiences, in the opinion of this critic anyway. There’s good direction and some solid performances but it’s difficult to invest in the characters or the story: a niche appeal to admirers of the style.