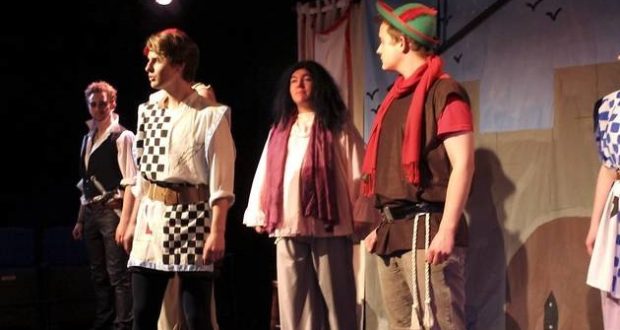 The Sword and the Dope, Waterloo East Theatre – Review

Pros: Show saving performances and two moments of magic in songs that might not fit into the show, but who cares when they are that funny.

Cons: Too many ideas crammed into one show, leaving it unbalanced and at times incomprehensible.
The Sword and the Dope, Waterloo East Theatre – Review

Pros: Show saving performances and two moments of magic in songs that might not fit into the show, but who cares when they are that funny. Cons: Too many ideas crammed into one show, leaving it unbalanced and at times incomprehensible. It’s so hard to decide where to start with The Sword and the Dope. I could start with some of the brilliant performances, or perhaps the great songs, or how about the wonderful venue, or just the lovely fact that the theatre group focuses on youth productions and performers. Or maybe I should just jump straight in with&hellip;

Fine performances are let down by a total mess of a show that can’t decide if it’s satire or pantomime and ends up being a sum of little parts that just can’t work together.

It’s so hard to decide where to start with The Sword and the Dope. I could start with some of the brilliant performances, or perhaps the great songs, or how about the wonderful venue, or just the lovely fact that the theatre group focuses on youth productions and performers. Or maybe I should just jump straight in with what a total mess of a show this is. Yes, maybe we should get that out of the way first as it is quite important.

It’s impossible to work out what direction The Sword and the Dope wants to take. It’s part political satire, part pantomime, part musical, part this, part that, and everything else in between. This is a show that seems to have taken the musical rule book, and followed every page to the letter. The problem is, so much is crammed in that whilst some scenes work fantastically, others just fall absolutely flat on their face.

For starters, the political satire. It’s too weak and too shoehorned. The gags that you notice are so simple it’s insulting. King Arthur is Theresa May, The Black Knight is Jeremy Corbyn, Sir Backstabber is the DUP. But unless I was missing something, these facts are hardly touched upon. If you want to be a Brexit farce, be one. But why then throw in so many other concepts. Again maybe I am missing something, but what were all the 1980 references, we joined the EU in the 70s so it isn’t to do with that?

Next, if you are doing a show about King Arthur, are you sure it’s clever to so knowingly reference Monty Python? Stealing gags about coconuts to represent horses trotting, the endless stepping on and off imaginary horses, being denied entry into the castle and references to the French are just lazy. As for the whole men dressed as women, they even sounded like Monty Python with their fake female voices, and all that was missing was a lone voice shouting out “stone him”.

Lastly, are you sure a show is going to sell on the fact your big name star came 6th in X Factor 2014? Are an audience who want to see a political satire interested in such names? Maybe if he could act I might have been more forgiving. Or maybe the stage direction he was given was “ham it up 1000%”, because that is what he did!

But it wasn’t all bad.  Most of the cast can clearly act. Amongst them, Affton Fay as the prophet/old hag is stunning; her subtle winks and gestures show that less can be more. As for Dan Cavendish, his performance was subdued but powerful, and it’s impossible to believe this is his theatre debut. It’s fair to say that the cast gave it their all, and it’s hard to fault the majority of them for a well-oiled performance. Who needs X Factor names when you could instead bring to the fore someone with more talent? The theatre group behind this, LAPA, I hope will move on from this and use that talent in something more deserving of it.

I have nothing but praise also for some of the individual moments of magic. I’d pay to see The Pet Shop Boys parody alone, it hardly made any sense in the context of this play but who cares, it was the highlight. And the knights hoedown was a close second. Both songs made no reference to the political element and were the better for it. Had the writer focused on this, maybe he would be on to a winner.

Come the end of The Sword and the Dope, the gag on stage was that the final death scene was dragging on too long, and as the dying hero sang his final words, the rest of the cast were looking at their watches bored. At least I think they were acting. In the audience we were doing it for real. Sorry everyone, I wanted to love you but tonight I just couldn’t.

Previous: Win a pair of tickets to Waiting For Godot @ The Arts Theatre
Next: The Blinding Light, Jermyn Street Theatre – Review