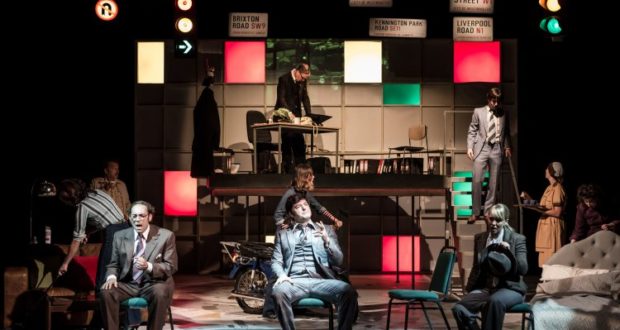 Pros: An affectionate and skilful adaptation of Jack Rosenthal’s screenplay.

Pros: An affectionate and skilful adaptation of Jack Rosenthal’s screenplay. Cons: The gentle narrative arc meant that the play felt theatrically underwhelming at times. Jack Rosenthal’s original 1979 screen play for The Knowledge has been legendary among cabbies since it first aired on television and tonight the audience was full of them. Rosenthal researched the play by following cab drivers around London, and Simon Block’s sensitive adaptation opens with film clips of real-life cabbies recounting stories as the audience takes their seats. The plot centres around four Londoners studying for The Knowledge - the notoriously difficult feat which requires&hellip;

A treat for lovers of London, with beautifully observed characters and situations. Although the plot feels sleepy at times, the contemporary relevance makes it compelling.

Jack Rosenthal’s original 1979 screen play for The Knowledge has been legendary among cabbies since it first aired on television and tonight the audience was full of them. Rosenthal researched the play by following cab drivers around London, and Simon Block’s sensitive adaptation opens with film clips of real-life cabbies recounting stories as the audience takes their seats.

The plot centres around four Londoners studying for The Knowledge – the notoriously difficult feat which requires drivers to commit to memory every street and landmark within a six-mile radius of Charing Cross Station. If they pass, and receive the coveted green badge, they become their own boss, with flexible hours and potentially high earnings theirs for the taking. Young Chris is encouraged and supported by his girlfriend Janet, a factory worker who is wise beyond her years. Still living at home, they want to build a future together. Ted and Val, an older married couple, are devoted both to each other, and to Ted’s dream of becoming a cabbie like his father and grandfather. Brenda and Gordon are newly married and aspire to more creature comforts. The lone female applicant, Miss Stavely (Louise Callaghan) has a neatly written scene with examiner Mr. Burgess in the second act which addresses the sexism she faces. She passes. Based on a notorious real-life examiner, Steven Pacey plays Mr. Burgess as a gloriously eccentric figure who needles and disarms the terrified candidates with a selection of odd walks, physical flourishes, and funny accents, providing many laugh out loud moments. He finally justifies his manipulative behaviour as a form of preparation with the wonderful line: ‘compared to people, the knowledge is a piece of marzipan’.

There are important moments of contemporary relevance. An older cabbie scoffs at the newbies, ruefully reminding them that the profession is on its way out thanks to the emerging mini-cab business. A reference to the strict police checks which cabbies face stands in pointed contrast to Uber, who currently remain under investigation following allegations of sexual harassment, and dishonest business practices. When Ted passes the test in record time he loses his badge just as fast – pulled over for being over the legal alcohol limit following a champagne celebration. Jenna Augen is terrific as his wife Val in their final scene; whilst insisting he apologise repeatedly for letting her down, she seemed to virtually vibrate with the conflict between her angry disappointment, and the urge to love and forgive him.

Gormless Chris (Fabien Frankel) is the only other candidate to pass. He’s a likeable character, but Frankel’s flat tone of voice strays towards merely colourless delivery at times. Rosenthals’ skill at depicting the everyman is evident, however it’s good that Block’s adaptation fleshes out the female characters, and occasionally the jokes sound dated. In addition to that, I did find myself wondering towards the end of the first act when there was going to be some, well, drama. It’s a beautifully observed piece, but it felt sleepy. The relationship between Gordon (an assured stage presence from James Alexandriou) and Brenda (pithy Celine Abrahams) lacked depth and convincing chemistry, while lines exchanged by Frankel and Alice Felgate as Janet lacked spontaneity.

Lighting, set and music support the story fondly. Street signs hang from above, and traffic lights glow green when Chris gets his pass. The inclusion of Pink Floyd’s Another Brick in the Wall, with its chorus sung by Islington Green School children, made me smile.

All in all, this was a charming piece, full of heart, which rightly celebrates a unique and precious aspect of London. I suggest you delete Uber and download Taxiapp right this minute.