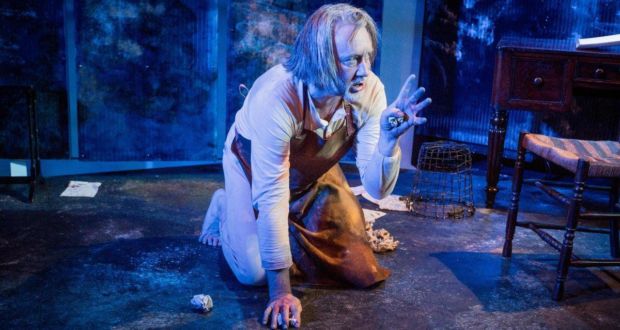 Jermyn Street Theatre’s specially commissioned new play is a fiery concoction of mental distress, marital problems and volatile chemistry that, whilst set in 1896, translates well to a modern audience. A real gem of a show.

It’s all change at the Jermyn Street Theatre, as new Artistic Director Tom Littler shakes things up with the first play under his tenure. For maximum impact, the theatre commissioned celebrated playwright Howard Brenton to write The Blinding Light and cast big names (Jasper Britton and Susannah Harker) to take on the lead roles of Swedish composer August Strindberg and his disgruntled first wife, Siri.

Littler has directed a Brenton play here before (Bloody Poetry, about Percy Bysshe Shelley, staged in 2012). What’s changed since 2012 is Jermyn Street Theatre’s new goal: to increase diversity in the audience, the cast and the creatives, including a major push for gender equality on and off the stage. Interesting, then, that The Blinding Light examines a man widely believed to be a misogynist.

The premise is a compelling one, based on Strindberg’s real-life breakdown and four-year disappearance, a time later referred to as his ‘Inferno period’. He became interested in alchemy, the occult, and religion; according to the official website of Sweden (yes, there is such a thing), ‘he was tormented by invisible enemies and hallucinations’. At the time, Strindberg’s second marriage was at breaking point, and The Blinding Light places his two wives, Siri and Frida (the latter played by Gala Gordon), at the centre of his troubling visions, along with hotel maid Lola (Laura Morgan).

In the wrong hands the setup could have ended up as nothing more than an awful sitcom, but Brenton handles the material sensitively. Everything takes place in Strindberg’s chaotic hotel room: set designer Cherry Truluck used corrugated plastic sheeting smeared with bruise-like layers of paint in blue, green, yellow and gold, all clashing with the neat period furniture surrounding it but complementing the smudges of copper sulphate and other unknown substances on Strindberg’s apron and clothes. A clock with no hands emphasises his detachment from the outside world.

I’m not sure Brenton and Littler will appreciate the analogy, but I found the playwright-turned-alchemist vibe has bizarre echoes of musician Kanye West (who married into the famous Kardashian family) trying to make it as a fashion designer. Strindberg struggles with his so-called gold looking more like sludge – not dissimilar from West’s inexhaustible lines of sludge-coloured clothes priced as though they were made of gold. West has been hospitalised for mental health issues; one media outlet suggested that he may have schizoaffective disorder. The parallels for this pop culture fan are clear, especially when Siri threatens her ex-husband with hospitalisation.

While Strindberg is portrayed as increasingly unstable, his wives grow more confident. Harker, in particular, relishes delivering many of Siri’s lines as she begins to hold the cards, though some of her dialogue is burdened by heavy exposition. It’s more naturalistic when she isn’t left to fill in the gaps for the audience. Praise should also go to Morgan, whose maid is irresistibly sarcastic and quick-witted. Each of the three female characters flits between straight scenes and what Brenton calls ‘distortions’: hellish visions in which they seem demonically possessed (or just every misogynist’s nightmare – a woman who takes back control). The eerie lighting in the distortions changes the colours of the walls, making gold and yellowish tones seem neon orange, adding to the discordance. Britton presents Strindberg as haunted and edgy, never tipping the character into Victorian freak show territory; his sensitive handling of the lead role makes it easy to stay absorbed in the moment.

Jermyn Street Theatre is small and modest, but it delivers a better theatrical experience than many venues two or three times its size. Now that’s real alchemy. Later in the season the theatre will show Brenton’s adaptation of Strindberg’s Miss Julie, bringing things full circle. I’m sure The Blinding Light will pique many theatregoers’ interest in both the venue and in the Strindberg-Brenton-Littler gift that keeps on giving.