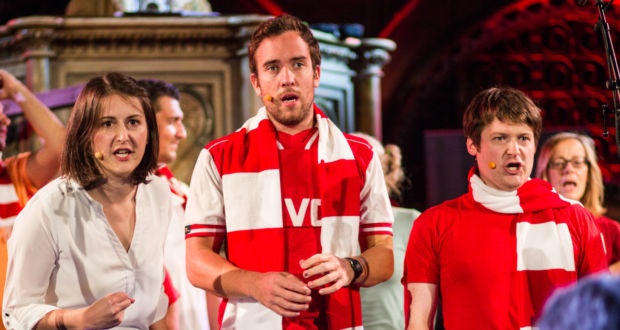 Pros: An interesting melting pot of an evening where football meets opera meets church. Cons: Football novices might need a bit more context than this show provides. I struggle to decide which topic I know less about: opera or football. When I arrived at the Union Chapel for the opening night of Fever Pitch the Opera, by local company Highbury Opera Theatre (HOT), I felt like I was going in at the deep end. The show is adapted from the book of the same title by Nick Hornby, who is well known for immortalising the Highbury and Islington area&hellip;

An enthusiastic and innovative tribute to Arsenal by local company Highbury Opera Theatre.

I struggle to decide which topic I know less about: opera or football. When I arrived at the Union Chapel for the opening night of Fever Pitch the Opera, by local company Highbury Opera Theatre (HOT), I felt like I was going in at the deep end. The show is adapted from the book of the same title by Nick Hornby, who is well known for immortalising the Highbury and Islington area in his works such as About a Boy and Slam. Fever Pitch follows the main character, Gooner (Robin Bailey), from his introduction to professional football as a young boy, through the ups and downs of both his, and Arsenal’s, fortunes.

This new opera, composed and conducted by HOT artistic director Scott Stroman, is rather different from versions of Carmen or La Bohème you might get served up at ENO or the Royal Opera House. For starters, it includes lots of football chants; if you believe in distinguishing between ‘high’ and ‘low’ culture, this is the mash up to end them all. The cast are good, although the difference between the pros tackling the lead roles and the community chorus is rather stark. The singing is usually intelligible, which is no mean feat in the cavernous space of the Union Chapel. The young chorus, which consists of local children and teenagers aged between nine and sixteen, is a charming addition to the cast and shows off some promising talent.

Even though the project is certainly very commendable for its ingenuity, there are a couple of flaws. As a non-football fan (and I suspect there were a fair few of those in the audience), I needed some explanation as to how a person comes to love a club so deeply that they end up in a psychiatrist’s office. This side of the story is left largely unexplained, as we race through a series of biographical events like university, jobs and relationships. Except for the final scene, the show also lacks the excitement of a proper game of football. Even in my admittedly limited experience a match can be joyful, nail-bitingly tense or both. It would have been nice if a little more of that had rubbed off on this tribute to the beautiful game.

In the end, Fever Pitch the Opera is a bit of a strange thing: an opera about football being performed in a church. Then again, I guess the subject itself is not all that important here; while much of the cast did not manage to convince me of their love for Arsenal they certainly loved what they were doing, and that enthusiasm counts for a lot. I take my hat off to Stroman et al. for managing to achieve the holy grail of bringing opera closer to home, both literally and figuratively in this case. It might not have been as good as a night at the Royal Opera House, but it was a lot more fun.