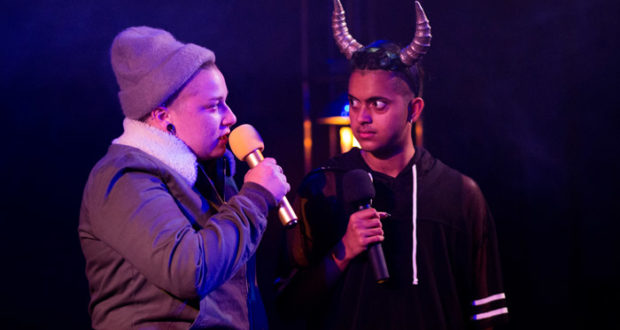 A triumphant piece of theatre that is entertaining and thought-provoking in equal measure. The ensemble cast have a collaborative relationship which is beautiful to watch.

User Rating: Be the first one !
Camden People’s Theatre is always a pretty joyous place to be. It looks like the inside of someone’s living room and has an innovative, welcoming aura. The theatre is hosting the Come as You Are festival, a celebration of gender in all of its changeable glory. Bullish headlines the event: a thoughtful, hilarious- yet solemn- play exploring gender dysphoria and the obstacles one might face when trying to transcend the traditional narratives of gender. The show is framed through Ovid’s tale of the Minotaur and is a visceral, multi-faceted thing that accomplishes everything that it sets out to do with vehemence and energy.
The cast is constructed of four (for the most part) individuals that identify as trans, non-binary or gender fluid. Even without knowing this information it is transparent from the get-go that the cast are approaching their performances with a commitment that places the show as something extraordinary. The four characters are interchangeable but individual. They each hold an equal responsibility to the show, acting as cornerstones of one another’s performances but each cleverly forwarding their own stories as individuals. Theatre is at its best when you can feel the audience respond to the tone set by the action in front of you. The four actors command the stage with an ease that envelops the space: there’s a reciprocity that creates a really unusual, but lovely relationship between the actors and the audience.
For the majority of the show, the pacing is spot-on. The tale of the Minotaur thoughtfully supports the underlying narrative which explores the physical notions of gender transition, and the internal narratives that support, or undermine, feelings of gender dysphoria. As the evening progresses, the arc of the show is taken to a place of unapologetic, empowering individuality. It’s at this point that the fifth character is introduced: Theseus, a marvelous pastiche of a man. Adam Roberton’s portrayal of the character is a hyperbolic representation of masculinity. In a city of a hundred and one plays about men (although we’re creeping to a place where diversity is alive and kicking), this might be the most important inclusion of a ‘laddish’ character. He presents the challenge to the ensemble of four: facing the societal norm. But instead of using this as an all-out criticism of the average Joe, the show ingeniously throws light on the stress of these restraints. The representation isn’t a generalisation because it’s a parody; more of a metaphor than a stereotype.
The only element that slightly lets down the performance, which hardly affects the overall success of the production, is the energy and pacing of the final scenes. The final few scenes feel equally climactic. Usually as an audience your led to a particular emotional response and then it’s the curtain call. It’s a bit intense to keep reaching this point and then be led into another scene of a similar tone. This took a toll on the actors in the penultimate scene where the actors did speak over each other a little.
However overall, Bullish is an urgent, important and necessary exploration of gender that makes its point with coherence in the most gorgeous of ways. The actors, Krishna Istha, Cairo Nevitt, Lucy Jane Parkinson and Amelia Stubberfield, are equally brilliant in their personal and fervid approach to the script.
Author and Director: Lucy J Skilbeck
Produced by: Milk Presents and Ruby Glaskin
Booking Link: www.cptheatre.co.uk/production/bullish/
Box Office: 020 7419 4841
Booking Until: 30 September 2017