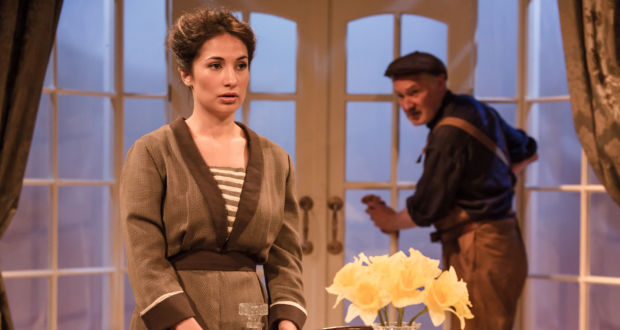 Pros: It’s a genuine delight to see a play of this era which has strong female characters and which explores thoroughly a theme that must have been controversial at the time.

Cons: The closing scenes feel very rushed and stilted and are the most obvious signs of the play’s true age.
Windows, Finborough Theatre – Review

Pros: It’s a genuine delight to see a play of this era which has strong female characters and which explores thoroughly a theme that must have been controversial at the time. Cons: The closing scenes feel very rushed and stilted and are the most obvious signs of the play’s true age. Chivalry or self-interest? Altruism or looking out for yourself? That is the central theme throughout Windows, Finborough Theatre’s current offering as part of TheGreatWar100, a series of plays set or written during World War I. It’s a bit of a stretch to include this play under that banner&hellip;

Windows is a fascinating, sweet-natured and yet socially-aware play. It flows smoothly between its three scenes, rarely flagging and with enough soft humour that a smile is never far away.

Chivalry or self-interest? Altruism or looking out for yourself? That is the central theme throughout Windows, Finborough Theatre’s current offering as part of TheGreatWar100, a series of plays set or written during World War I. It’s a bit of a stretch to include this play under that banner – the war connection is woefully thin – but to complain about that would be to miss out on a great piece of work.

Finborough Theatre is always an intimate affair; even more so tonight as it is the most crowded I have ever seen it. It’s also the oldest audience I can recall – maybe an indication that the author’s most famous work, The Forsyte Saga, has drawn in people old enough to remember the BBC adaption from many years ago. The little rows of seats are jammed as we sit around the dining table, the focal point for all three scenes – so focal, in fact, that the comment by the father of the family that they “always seem to be eating” is met with laughter at its knowingness, as all three scenes start at the conclusion of a fresh meal.

In many ways, Windows is a play of its time, that time being 1922. There is the rich family; father a writer, son now a poet but not able to forget the war, mother and daughter never displaying any other function than to keep the house running. And then there is the common window cleaner whose daughter, Faith, has recently been released from prison following a public trial over the death of her newborn baby, and whom he asks the family to take in as their new maid.

John Galsworthy was clearly a writer with a social conscience (another of his stories even led to prison reform). With Windows he put his hand to exploring social classes, the divide between the rich and the poor, and, of course, that chivalry or self-interest question. As father and son take pity on young Faith, determined to give her a second chance in life and thus demonstrate their chivalry, mother takes the self-interest approach, declaring herself a realist and that people cannot change. It’s in fact a very similar theme to Pygmalion – the English gent determined to make something out of the rough street girl.

I am probably biased towards such social-leaning stories, and on one level Windows is a fascinating play that shows that some of the concepts we still explore today are nothing new. We still have rich people viewing the less fortunate as items to play with, to use to demonstrate how good they are, without ever really understanding why they may be in that position.

But Windows deserves to be seen as more than a novelty revival. The mostly strong cast handle the old-fashioned style of the language and mannerisms with relish, especially David Shelley as the patriarch, somehow always removed from reality in his thoughts as he comments on the day’s newspaper headlines with pipe grasped firmly between lips. Similarly, Eleanor Sutton who as the daughter seems to elude pure joy about everything, giving the impression of a girl who will never want for anything in life, is an absolute hoot. She may have no direct role in life, but Galsworthy clearly saw his female characters as equal to their male counterparts, portrayed best by Sutton’s refusal to leave the room to allow the men to speak more openly.

The tiny space is used to its full potential, and it’s not until the closing scenes, when the whole cast is on the stage, that it feels cramped. The rest of the time the play is superbly directed, with the dining table the centre of everything, from the opening of each scene as food is finished, to the family discussions as they sit or stand around it.

Windows is a fascinating piece of work, and a worthy revival that shows that some things never change.