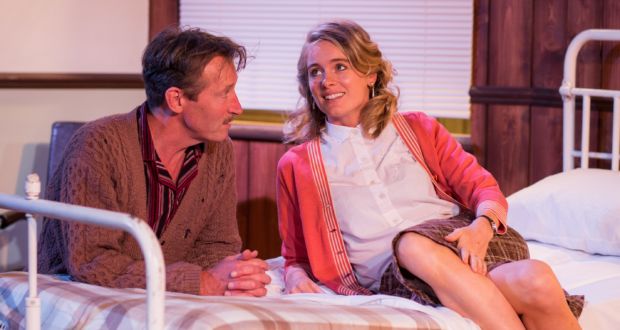 Cons: The show is slow in places, and scene changes could have been smoother.
Mrs Orwell, Old Red Lion Theatre – Review

Pros: This play skilfully captures the ailing Orwell, and his love interest, Sonia Brownell. Efficient set design in a tight space. Cons: The show is slow in places, and scene changes could have been smoother. As far as marriage proposals go, asking someone to be ‘the widow of a literary man’ isn’t one of the most romantic. Yet it’s par for the course in Mrs Orwell, as the man proposing is none other than George Orwell, battling tuberculosis and thinking pragmatically about the future. Romance doesn’t really come into it – he’s looking for a wife from his hospital&hellip;

A deservedly dramatised final episode of George Orwell’s life, and the lives of those around him, with heightened tension and a dash of humour.

User Rating: Be the first one !
As far as marriage proposals go, asking someone to be ‘the widow of a literary man’ isn’t one of the most romantic. Yet it’s par for the course in Mrs Orwell, as the man proposing is none other than George Orwell, battling tuberculosis and thinking pragmatically about the future. Romance doesn’t really come into it – he’s looking for a wife from his hospital bed, and his friend Sonia (Cressida Bonas) seems to fit the bill.

By the time the proposal scene comes, a little way into the first act, writer Tony Cox has firmly established that Orwell (Peter Hamilton Dyer) is hard work. Much like the keyboard warriors lurking in the comments section of Daily Mail online articles, Orwell delights in hating pretty much everything and everyone, including ‘fruit juice drinkers, sandal wearers’ and Salvador Dali. He drinks a specific hot chocolate brand which must be stirred with a wooden spoon (otherwise, presumably, the world will end). For a man whose literary ideas were so broad and forward-thinking, he’s incredibly petty and narrow-minded. No wonder Sonia says everyone calls him ‘Gloomy George’.

His habitual penny-pinching, tragically reflected in a revelation of his first wife’s death, is emphasised by Rebecca Brower’s costume design. Orwell wears a shabby, shapeless cardigan, with multiple holes; his cord trousers hang off him like a fancy-dress costume. Brower gives Sonia Brownell a range of elegant, slim-fit outfits to emphasise the contrast. A very slimy Lucian Freud (Edmund Digby Jones), in a polo neck and voluminous trousers, bridges the gap between the two.

Hamilton Dyer makes a compelling Orwell, slowly disintegrating and coughing up his lungs between sponge baths and rants, but the nature of the play means his gloom can be infectious; there’s a risk you could get sick of those hospital walls, despite their clever design. Conversations filter through from the echo-filled corridor. Everything is about Orwell and his needs. Though the title is about becoming his wife, there’s no mistaking who’s in charge, and Bonas supplies plenty of withering looks and pithy delivery to convey the tension in the room. The fleeting appearances of Orwell’s hospital nurse (Rosie Ede), whilst mostly funny, show the difference between the paid helper who signed up for the job, and the friend who stands to lose her career, name and identity should she marry him.

Fred Warburg, Orwell’s publisher, indicates that the writer’s estate is looking healthy – he tells Sonia she might expect to get £15,000 a year as his widow, which the internet suggests would be around £500,000 today – but money isn’t her sole motivator. Both Orwell and his wife-to-be have multiple factors drawing them together, and one of her biggest concerns is to avoid the pain of ‘love and happiness’ from a previous doomed relationship with a married man. However, it’s hard to feel totally sorry for her, as she almost sleep-walks into her new role, not even knowing how old Orwell’s son is.

The play mostly redeems itself when characters finally claw back control from the cantankerous patient. Warburg’s rallying speech on the publishing industry and on Orwell’s early failures show the great man isn’t solely responsible for his own success. Conversely, a confrontation between Sonia and Lucian Freud is cringe-worthy and, if not for the historical facts behind the events, would feel clichéd.

Mrs Orwell isn’t supposed to be a light, comfortable watch: it’s a glimpse of an overbearing genius and his dominance. But the touches of humour and the strength of Sonia’s character make it an absorbing final chapter of George Orwell’s life.