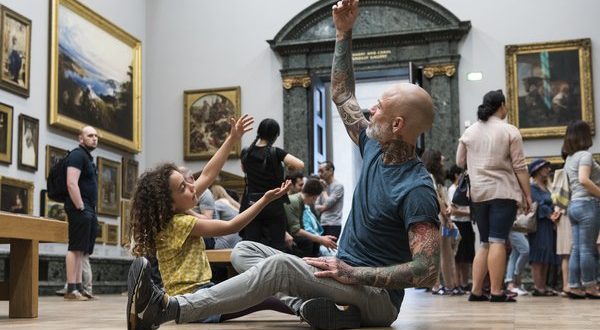 Pros: The ensemble sequences where there’s something to watch in every corner of the room.

Pros: The ensemble sequences where there’s something to watch in every corner of the room. Cons: Lacking a bit of mischief and mystery. I wish I could have stumbled upon Fevered Sleep’s Men and Girls Dance at Tate Britain. I wish I could have entered the 1840 room looking for The Lady of Shalott, and been taken aback by the sight of six grown men dancing with nine young girls. Sadly, the necessity of ensuring an audience trumps the desirability of magical discoveries, and so I turned up at the Tate Britain fully expecting to see some dance. I&hellip;

A charming dance work from accomplished yet unaffected performers.

I wish I could have stumbled upon Fevered Sleep’s Men and Girls Dance at Tate Britain. I wish I could have entered the 1840 room looking for The Lady of Shalott, and been taken aback by the sight of six grown men dancing with nine young girls. Sadly, the necessity of ensuring an audience trumps the desirability of magical discoveries, and so I turned up at the Tate Britain fully expecting to see some dance. I was also, thanks to the rather clickbait title of the show, pretty confident that it would involve men…and girls, and rather regretted the lack of surprise.

The performance starts slowly, as the men and girls learn about each other. It’s the girls who take the initiative, standing enquiringly in front of the anonymous men, or reaching out to examine male hands. They start to observe each other, girls and men noting small details of one another’s appearance, mirroring dance moves and becoming comfortable together.

As their familiarity grows, the dancing gathers pace and scale. Eventually the whole ensemble is dancing together, covering the long room from end to end with choreography that is fluid and deceptively spontaneous. The dancers bounce off each other, duck under arms and slide through legs. Girls are swung onto manly shoulders, twirled around and flown like airplanes. The overall impression is of larking with a favourite uncle in the back garden on a sunny day – times six – but such carefree pinballing must demand great precision in timing and placement.

This picture of halcyon normality is reinforced by the diversity and unaffectedness of the performers. The girls, aged around nine or ten, have nothing of the stage school about them. Their memory for choreography is as unexpected as it is impressive, given how unassuming and cheerful they look as they enter the room, all dressed differently in age-appropriate, high street style. The men are all weekend casual and it’s refreshing to see male dancers – some bearded, some stocky, some heavily tattooed – who don’t obviously conform to buff or lithe stereotypes.

There is a deep vein of idealism running through Fevered Sleep’s work, and they do a great service by reminding us that familiarity and physicality between men and girls can be innocent, affectionate, and enriching. It is charming to see the two groups match each other for energy, grace and flexibility, and depend on one another for strength, stability and mutual trust. However, that idealism does sometimes manifest here, as it did in their previous show, Dusk, as a rather too earnest wholesomeness. When the girls describe their male counterparts they stick to all that is anodyne and inoffensive. The exuberance and vigour that comes through in their dancing is entirely lost in this rather phoney dialogue which seems to diminish the girls by focusing only on sweetness and innocence.

The 1840 room is a big handsome space for movement, and it’s fun to see the gallery occupants responding to the performance; moving awkwardly away, gathering in doorways to watch or trying to carry on regardless. The acoustics are less good, and it is hard to understand some of the sung and spoken words of the soundtrack. Indeed, the music only really makes an impression during the last, big, powerful set piece of the show.

This is a lovely idea for a dance show and it’s wonderful that it can be seen, for free, in a beautiful public space. But what makes this idea such a successful reality is the way that seemingly light-touch choreography and a group of likeable performers come together to create something which looks natural, spontaneous and really joyful.