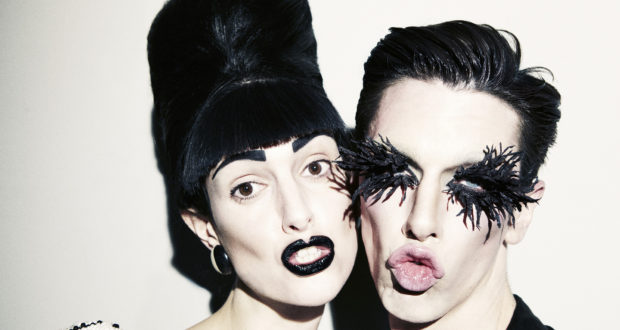 Liv Morris and George Heyworth (aka, Bourgeois and Maurice) sat in a booth at the Soho Theatre bar and greeted me with such enthusiastic velocity that George knocked water all over his notes for the opening night of their new show, Style over Substance – a 10-Year Retro-Speculative. Apparently this isn’t a disaster, and the situation is dealt with promptly and with such good humour that I’m then a little bit – well, very – in love with them.

The duo have been a hit in the cabaret and fringe world for a decade, and their success in matching a striking aesthetic with thoughtful and hilarious political satire has earned them rave reviews. (For a taster of their inherent comic brilliance, I can recommend taking a brief visit to their Instagram page @bourgmaurice to watch them gate crashing an elegant BalletBoyz rehearsal with just as much – ahem – elegance.) We caught up with them ahead of their new show to get the low-down on just what they’ve got hidden up those sequinned sleeves.

How would you describe your act to someone who hasn’t seen it?
Liv: We’ve been doing this for ten years and we are still rubbish at describing what we do!
George: What are we?!
Liv: We play the characters of (Georgeois) Bourgeois and (Maurice) Maurice, who are these genderless alien beings, who are also brother and sister. They perform songs they have written, which provide social comment and satire on the state of the world and current affairs. The show is quite visual and we have a very specific look. We use a lot of costumes and projection. It’s kind of a sensory experience. Except for maybe smell . . . well maybe by the end of the show!
George: Yes, that added sensory bonus at the end.
Liv: The characters [are] these quite unreliable guides through the world. They get things wrong and you can’t necessarily trust them all the time, but the audience go along for the joy ride.

Sounds fantastic! So what is this show? I believe it is a sort of compilation of your old work.
George: It’s been ten years since we formed as an act, so we wanted to mark it by looking at what we have done in that time. We also wanted to look at how the world has changed in ten years. We realised that since we formed in 2007, things have changed politically and socially and it just doesn’t feel like that long! It has gone by so quickly. Because we write about what is going on in the world, it felt like a good opportunity to look back. Our material often has a shelf life because people aren’t talking about a particular issue any more; it felt like a good opportunity to be able to re-contextualise our songs.
Liv: Politically and socially at the moment everyone is like – ‘what has happened?!’. It’s interesting to see how we got here . . . but we’re not saying we have all the answers.

You can’t say that now! We had expectations!
George: Oh no! Well, we are looking back and seeing the seeds from where it all came from. It actually hasn’t come from out of the blue. All of these ideas of nationalism and division were happening six years ago.

Was it strange revisiting early work? Like when you get that cringey feeling when you hear your voice recorded or see yourself on film?
Liv: It definitely was at times quite cringey.
George: There are definitely old songs where we questioned what we were thinking at the time.
Liv: We have changed our style a bit over time. We were in our early or mid- twenties when we started and our outlook was slightly different. We looked at the world we immediately inhabited. Whereas now, partly because of age but also because the world feels much more politicised now, the show has become much more outward looking. It’s still very much from our perspective, but looking back on [the] old world was interesting – reminding us of those moments we chose to look at and why they were interesting to us.

Tell us about your costumes! Is it all secret?
Liv: A lady called Gemma Banks is doing them. Gemma worked with Julian [J Smith], who we have worked with a lot.
George: The most expensive outfit in the show we wear for about thirty seconds. They light up and they’re really over the top and elaborate.
Liv: We’re also having sequin catsuits made, which is a feat of engineering as I’m nearly six months pregnant.
George: We’ve managed to choose the only sequinned material with no stretch.
Liv: And for the second half of the show we’re re-wearing some of our old costumes.
George: I’m going to wear the first outfit I ever had made.

It’s the circle of cabaret life! Tell us about some of the guest acts in the show, you’ve got Travis Alabanza and Victoria Sin, amongst others.
George: We’ve performed here as guests, at the beginning of our career, with Justin Vivian Bond and Our Lady J, so it felt like a nice way of tying back to our first experiences in the Soho Theatre. We’ve done a lot of mixed bill nights, but never any thing at Soho. It’s fun to have interesting new queer acts involved!
Liv: There are so many amazing new queer performers around. It is nice to introduce [them to] a Soho Theatre audience. We’re also running a Cabaret and Drag course here soon.

Well you’ve been doing this for ten years so I imagine you are very wise by now?
Liv: Oh, of course, very! It is actually, selfishly, also quite beneficial to us to analyse your own practice. We have such a shorthand with each other that we don’t always analyse it. It’s a tricky one because queer work, and cabaret in particular, is inherently not too structured.

So is the show quite interactive?
Liv: There’s not so much audience participation, but George does talk directly to the audience. It’s as responsive as the audience want to be. In Hebden Bridge, one guy just wanted to have a lovely long chat! The best thing is when people just relax and have a conversation. We would never set anyone up to fail. Our audiences, because it is cabaret, usually expect there to be some kind of interaction. It’s at half past nine – so some people are quite boozed up!

Bourgeois & Maurice: Style over Substance – a 10-Year Retro-Speculative runs at the Soho Theatre (Downstairs) through 26 August.