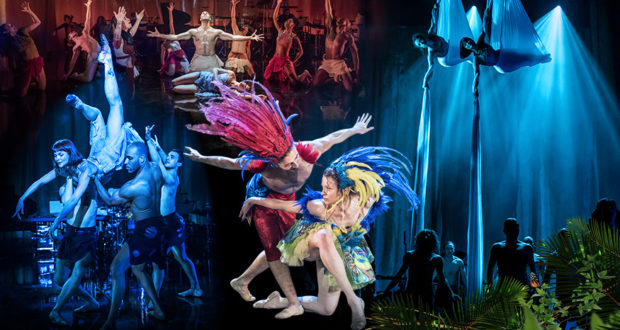 Sister Grimm's 'Voices of the Amazon'

Interview: Pietra Mello-Pittman & Ella Spira on ‘Voices of the Amazon’

Londoners are getting a taste of the Brazil this July, as production company Sisters Grimm brings their new dance musical Voices of the Amazon to the Sadler’s Wells stage. Following their previous success with INALA, a Grammy-nominated production created in conjunction with Ladysmith Black Mambazo, Sisters Grimm has returned with a celebration of the Amazonian rainforest, educating audiences about the threats to its lush landscape through dance, music and more. We caught up with director Pietra Mello-Pittman and composer Ella Spira, the two co-founders of Sisters Grimm, to learn more about this vibrant production.

Tell us more about Voices of the Amazon. What should audiences expect from this production?
Voices of the Amazon follows the story of Beleza, a water spirit from the Amazon river, whose search to cure her dying sister takes her on a life-changing journey deep into the forest. Entranced by the beauty of the natural world, her eyes are soon opened to the realities of deforestation and the devastating loss of renewable medicines and plants. Along the way she encounters a carnival held by Mother Nature, where she meets the creatures that reside in the forest and the indigenous tribes people and convinces them to help with her quest.

Audiences will experience a sensational musical score, spectacular dancing and choreography by Helen Pickett performed by a culturally diverse cast. They will leave feeling uplifted and full of emotion, and we hope the audience will feel more of a connection to the Amazon Rainforest. The show encourages people [to] look at their own surroundings and appreciate the beauty and importance of all nature and the choices we make in everyday life that, with some minor changes, could make a big difference.

How did this production come about? What was the inspiration behind the piece?
After a sell-out success of INALA, we decided on Brazil as our next culture to infuse and create a show around. Pietra’s Mum is Brazilian – they moved from Brazil to the UK when Pietra was 5 – so exploring Brazil as a culture to collaborate with was top of our list for our next production. After going to Brazil together on a cultural immersion trip, the biggest inspiration was the Amazon rainforest, and we want to get people emotionally engaged with this natural beauty, as well as draw attention to the permanent damaging effects of deforestation.

Voices of the Amazon contains an important message about the realities of deforestation and loss of renewable medicines and plants. How do you think dance can be an effective tool to communicate social/educational messages?
Dance can be a powerful tool in telling a story and communicating messages, but this can be said about all of the arts industry. Art doesn’t necessarily have to be all doom and gloom to be able to raise important social issues that affect everyone in the whole world. Climate change is happening now, and unless we raise awareness and do anything we can to help protect nature and prevent deforestation, pollution, endangerment of animals, we will lose the natural beauty of this world, which would be devastating. When people come to see our show, they are not only getting a wonderful display of talented dance, but they can take away the message about the realities of deforestation and hopefully do something to contribute to protecting our wonderful earth.

In addition to ballet and contemporary, which are perhaps more familiar to UK audiences, Voices of the Amazon also uses capoeira. For those who aren’t familiar with this style of movement, could you tell us more about it and how it’s used within the production?
Capoeira is a traditional Brazilian art form that combines martial art, dance, music and acrobatics and is played between two players. In the show it is sometimes used when two characters are fighting or defending someone – for example, it can be seen in the fast sequences, especially during the fire scene at the end of the first act. Other times, all the performers take on some of the moves used in capoeira like the “Ginga” and incorporate them in the dance sequences. We had some great sessions with our Brazilian performers, who taught the other non-Brazilian members of our cast how to do capoeira.

The production credits Alexander Van Tulleken as its science consultant. How did the production benefit from this collaboration between science and the arts? What effect did his consultation have on the artistic choices you made?
We feel it is important to have as much the correct knowledge as possible when you are creating something, and we wanted to make sure we could give the audience the correct facts. We have learnt a lot about the rainforest from Alexander (Xand). Indigenous life and knowledge is important, fragile, under threat, and undervalued. Xand was able to tell us just how knowledgeable the Shamans are and we have woven this into the show. [We learned that] the western uses of most plant-derived modern drugs are related to their original indigenous use, and many of these drugs were discovered by investigating plants that were already known to indigenous healers.

Ella, how did you approach creating the score for this piece? How does your composing process change when you’re creating work for dance, as opposed to other projects?
Ella: I started creating the score for this piece by focusing on the narrative and the key themes within the production; for example, water and trees. The first piece I wrote, which appears in the second act, was inspired by us being in the Amazon for the first time on the river, feeling the swells and fluidity of it and being wholly at one with nature. Another example is a sad, classical piece at the top of act two, which I wrote as a memory of feeling that the trees were crying for their lost members that have gone through deforestation. It broke my heart in a way that felt very physical to see such vast areas chopped down or burnt and this emotion came right to the fore when I was writing certain pieces.

Pietra, you began your career as a ballerina with the Royal Ballet. How has your ballet background informed your work as a director and producer?
Pietra: As a ballet dancer you have to be determined and be disciplined, as it is not – and certainly was not for me – easy. The show must go on no matter what, and I felt we were all incredibly tough and focused. I believe I have carried that motivation with me.

There is a lot of negative, as opposed to positive, critique that is accepted in the ballet field, which I never understood or believed in as a dancer. So as a director and producer, I strive to communicate in a positive way to get the best out of everyone we work with and create a positive working environment, filled with people that are passionate about what they do and sharing a vision and goal.  I performed in many narrative ballets during my 13 years in the Royal Ballet, some that are very traditional with old-fashioned mime, and others, like Alice’s Adventures in Wonderland and A Winter’s Tale by Christopher Wheeldon. I remember working with [Wheeldon] with fond memories and found it a very inspiring time. Chris would always talk while directing the scenes as if there was a script to the ballet steps, which made the narrative scenes really clear. That gave a context which made sense to everyone.

It is an intuitive and important thing for me to include some elements and aesthetics of ballet that were significant to me in my career in the Royal Ballet in my directing approach – i.e. unity of movement, attention to detail and precision. Big, strong melodic music was the first thing I connected to in ballet, [and] this will always be the most important driving force for me in creating visuals.

Voices of the Amazon is currently playing at Sadler’s Wells Theatre through 8 July, after which it will continue on a world tour. Tickets to the Sadler’s Wells performances are available here.