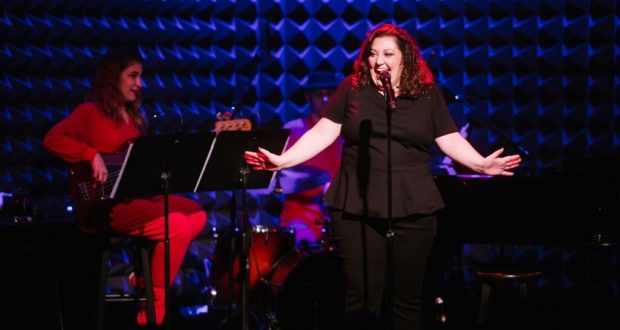 The lights are low, the sequins glinting and Tori Scott is belting out a mash-up of Cindi Lauper, Britney Spears, Kesha, Gloria Gaynor and Beyoncé. And that’s just the warm-up. An actress, comedian, singer and vodka-loving ‘good time gal’, Scott is a natural performer who’s been doing it since she was six years old. Along with her smoky eyes and tumbling dark curls, the cabaret diva possesses a vocal range comparable to Freddie Mercury or Michael Jackson – two artists she loves to cover. Ahead of her upcoming solo show Thirsty! at Brasserie Zedel, we caught up with Scott to learn about her ‘tragically true’ tales and cabaret career.

‘I’ve been told people come to my shows because they love to hear me belt or they love my song choices,’ says Scott about her audience appeal. ‘Others say they love how relatable I am and enjoy my stories. And, because I perform for a lot of gay men, some of them come to see my cute music director and his arm muscles.’

She adds, with a smile, ‘Hey, whatever gets them in the door works for me.’

The music director may be cute, but it’s Scott’s feel-good music and saucy stories that keep them coming back. And she does know how to tell a story. There was the time Scott was arrested in Texas for public intoxication, or the night she performed to an audience of naked gay men in a sweaty New York bathhouse, alongside a transgender fire eater (frizzy hair was the least of her worries). Hapless tales of vodka-fuelled adventures are woven into the music, with clever juxtaposition of songs and anecdotes, such as her bemused rendition of 4 Non-Blondes’ What’s Up delivered from a Texas jail.

From performing in musicals as a child to studying musical theatre in college, Scott’s rarely been far from a stage. ‘I have definitely spent most of my life singing, acting, dancing and making people laugh,’ she says. Back in her 20s, there was ‘a brief moment’ when Scott wanted to be ‘taken more seriously as an actress’ and devoted an entire summer to studying Chekhov. The moment passed, however, and Scott ‘found her groove’ as an artist during her late 20s and early 30s.

Scott’s been performing solo cabaret shows for around five years now, and says it’s been ‘a wild ride’. As she puts it: ‘Life happens and lessons are learned’. And, of course, the life lessons provide a steady stream of material. But how different is the on-stage persona to real-life Tori Scott? ‘All of my stories are tragically true,’ she admits. ‘What can I say? I have lived!’

The irony is that, as Scott becomes more successful, there are fewer opportunities for the misdemeanors that inspire her anecdotes. ‘There was a time when my stage persona and my actual self were very similar, which is why I have so many ridiculous stories to share,’ she says, ‘but the busier I get, the more my real-life self becomes less exciting.’

So, Scott isn’t slamming shots in bars anymore? ‘Nowadays, my stage persona is a heightened version of myself and she’s a good time gal. But once the eyelashes come off, I’m on my couch without pants and watching one of the Real Housewives franchises,’ Scott clarifies.

That couch is in Queens and often shared with a cat named Shelby. Scott is originally from Texas, went to college in Boston and has now been a New Yorker for fifteen years – but this month, Scott leaves NYC to bring her latest solo show, Thirsty, to the UK.

In London, she’ll be blasting out those high notes across the art deco interior of Soho’s Brasserie Zedel. ‘I adore this kind of setting!’ says Scott, who explains she launched her career in the back room of a New York gay bar where ‘people sometimes screamed through my entire set or spilled drinks or loudly ordered shots during quiet numbers.’

It might have put some artists off, but Scott loved it. Her current artistic home in New York is Joe’s Pub at the Public Theater, where the audience drunkenly formed a kick line to accompany her closing number during a recent show. She loves that her audiences tend to be ‘very animated in their reactions to my stories. They are rowdy, and the energy is amazing!’

Unsurprisingly, given Scott’s vast repertoire, her influences are wide-ranging. She ‘adores’ Bette Midler, was inspired by Barbra and Judy (clearly no need for surnames) and tells me excitedly that she shares a birthday with Ethel Merman. If she could duet with anyone it would be Freddie Mercury (cue adoring sigh).

Her comic heroines include Carole Burnett, Sarah Silverman, Margaret Cho and French & Saunders. ‘And, of course,’ she adds, ‘Joan Rivers – I’m so glad I was able to see her perform live before she passed away.’

For Scott, the audience’s experience is paramount, and her exuberant performances are brimming with fun – but also contain moments of pathos. ‘I love to entertain and I love to make people laugh,’ Scott says. ‘I want the audience to have a great time at my shows. I want them to laugh and smile and maybe even cry a little.’

This is Scott’s first UK trip, and it’s fair to say she is quite excited. ‘I’m so excited to do my shows for a UK audience and can’t wait to see how they respond. I’m excited to ride the tube, I’m excited to order a pint in a pub, I’m excited to see my first show on the West End . . . the list goes on and on!’

But, of course, her main focus is showing her audience a good time. ‘I want them to sit down in a dark theatre or bar for an hour and go on this musical journey with me,’ Scott says.

‘Hopefully, they leave happier than they were an hour before . . . and a little tipsy too.’

Tori Scott: Thirsty! will play at Brasserie Zedel from 28-30 July.