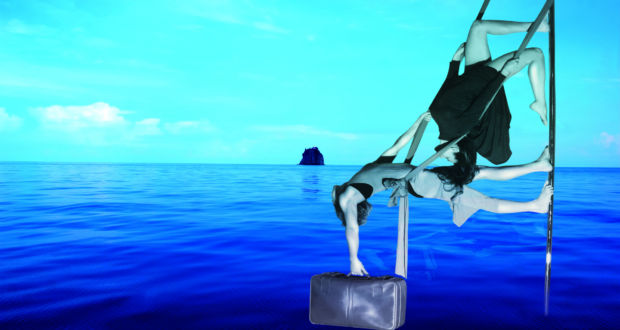 Pros: Preternaturally strong aerialists are a joy to watch.

Pros: Preternaturally strong aerialists are a joy to watch. Cons: Amateur production values and a lack of clear concept. I was curious and excited about this little venue – sometimes the most unassuming places are the best finds. When I arrived I was warmly greeted by the artistic directors and shown upstairs to the bar. It was a pleasant, light space, with tables and chairs, sofas, and over to one side, what looked to be a very nice piano sleeping under a heavy canvas. As I sat down to enjoy a cold white wine I counted four other solo&hellip;

LCP Dance Theatre claims to draw awareness to human rights violations through dance, but while the silks and pole work are beautiful to watch, this piece doesn’t have much substance.

User Rating: Be the first one !
I was curious and excited about this little venue – sometimes the most unassuming places are the best finds. When I arrived I was warmly greeted by the artistic directors and shown upstairs to the bar. It was a pleasant, light space, with tables and chairs, sofas, and over to one side, what looked to be a very nice piano sleeping under a heavy canvas. As I sat down to enjoy a cold white wine I counted four other solo theatre goers. Then I noticed the clock above the bar was running almost ten minutes slow. Everything But The Girl’s 1988 cover of I Don’t Want To Talk About It was playing on the stereo and I began to sense a distinct lack of pre-show buzz. Somebody milled about handing out programmes, the scheduled start time came and went, and I began to lower my expectations.

The theatre itself is a fifty seater black box. Cushions on the seats was a nice touch. The show’s premise sounded interesting, utilising pole, silks, and contemporary dance, to – according to the blurb – ‘explorethe impact of a new environment on a refugee, who must face social, political and psychological challenges in order to integrate with a new society.’ It began with a duet between a male and female dancer, who made swimming gestures with their arms, and held an old brown suitcase aloft. So far, so literal. When they began to incorporate the pole and silks I lost any sense of character, story or theme, though I enjoyed the beautiful shapes the performers made (trying to ignore the noise of the creaking, rickety pole) and the use of the silks. At one point a dancer turned herself into the bow of a ship, at another moment she curled up inside a purple silk which became like a pulsing heart, or a womb. These images were evocative, beautiful, and creative. But I couldn’t grasp – even in the loosest sense – what this piece intended to say about the refugee crisis.

The lighting and music didn’t enhance the movement – the music was without much contrast throughout – and the costumes baffled me somewhat. Why was the male dancer was wearing a shirt and no trousers? What was the point of everyone changing into black shorts and crop tops in the second section. No idea.

The second section began after a brief pause, during which the house lights came up, and for which we had been requested to remain in our seats. Two of the performers stomped on, one tightened the rickety pole while another wiped it down, and a technician ambled on to switch off a projection with a remote control. I’m all for rough theatre, but this went too far, and I would actually question the ticket price’s value for money given how casually this change was done. All the theatrical energy was lost, and from that moment on I felt I was watching a rehearsal. As one performer spun upside-down with exquisite strength and control I found myself noticing how flushed her face and chest became. I thought about how vital and alive she was, and how desperate refugees are for a chance to rebuild their lives somewhere safe, where they can flourish. Overall the concept of this piece didn’t equal the vitality and power that these young performers had in their bodies, and it was naïve in its approach to a complex subject.