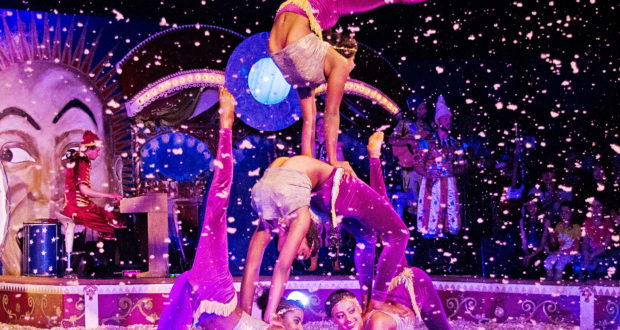 The Konjowoch Girls at the Jackson's Lane Postcards Festival

Adrian Berry on the Postcard Festival at Jackson’s Lane

Postcards is Jacksons Lane’s annual festival of back to back one nighters of brand new circus, cabaret and extraordinary performance. Almost 100 artists participate each year, and we curate at least three brand new mixed bills. It’s hard work, but also huge fun. It’s different in so many ways to other times of the calendar – not something we could sustain across a whole year. For that reason, I have to be very careful about what makes it into the festival. Even the approach to circus is different – this is so much more about experimentation. It’s also a chance to work with some artists out of their own comfort zone, and I love that sense of danger the festival brings.

The other thing I love about Postcards is that the whole team at Jacksons Lane gets behind it. So many of them have stayed and seen so much this year, and that means a lot too. Tickets are selling, people are creating a buzz about it, the artists are getting excited. As we hit the final week, there’s a real momentum to Postcards. It really feels like a festival too.

I get very weary of programmes of work that could exist anywhere and at any time where a ‘festival’ umbrella is created. Postcards is genuinely something new every night, and we want to translate that and articulate it in a festival format. The most exciting thing is always the audiences. I never get bored of curating and programming, and I never fail to be excited by seeing that work come to fruition and people getting animated about it in the bar afterwards. I’ve been at Jacksons Lane for nine years now and I genuinely feel with Postcards we’re just getting started.

So, there’s still time to catch a myriad of thrilling new work – 15 performers from Ethiopia one night, or a final cabaret celebrating the weird and the wonderful of the London cabaret scene. Come and check Postcards out. Oh, and you don’t pay when you book, you decide how much it’s worth afterwards!

Postcards Festival is running at Jackson’s Lane until 29 July.

Previous: Interview: Miss Polly Rae on ‘Between the Sheets’
Next: The Marriage of Kim K, Arcola Theatre – Review