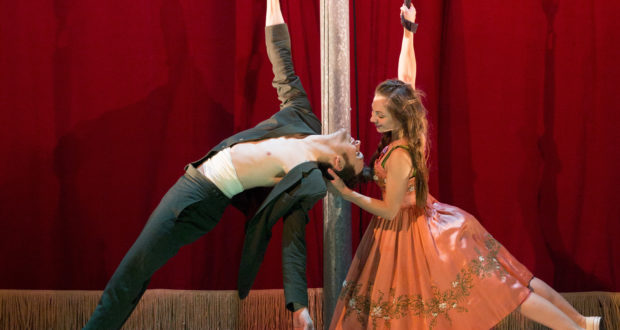 Cons: The script is a little muddled and too funny for a tragic love story.
Tristan & Yseult, Shakespeare’s Globe – Review

Pros: An engaging, exciting and irreverent production featuring superb physical movement. Cons: The script is a little muddled and too funny for a tragic love story. The Globe has been on my list of theatres to visit since I moved to London four years ago. I think I never got around to going because I thought of it more as a tourist attraction than a ‘proper’ theatre. Allow me to eat my words. I was lucky enough to visit on a bright, warm evening. The Globe is a beautiful, one-of-a-kind venue and I strongly recommend you visit – never&hellip;

An oddly hilarious adaptation of a tragic love story, Tristan & Yseult triumphs as an exuberant, energetic and irreverent production.

The Globe has been on my list of theatres to visit since I moved to London four years ago. I think I never got around to going because I thought of it more as a tourist attraction than a ‘proper’ theatre. Allow me to eat my words. I was lucky enough to visit on a bright, warm evening. The Globe is a beautiful, one-of-a-kind venue and I strongly recommend you visit – never before have I needed to catch my breath upon entering a theatre. The front of house staff are also some of the friendliest and most enthusiastic I’ve ever come across, making for a great evening.

Tristan & Yseult is a modern adaptation of the ancient fable of the same name. The text cherry-picks from different versions of the story and takes big artistic liberties. An anorak-clad, ‘NHS specs’-wearing chorus, the ‘club of the unloved’, tie the story together. Music also plays an important role, played by a live band and via a sound system. The script is playful, primarily consisting of poetry and occasional witty asides to the audience. The staging is equally modern and novel; a metal pole stands in the middle of an almost bare stage, with hoists hanging from the ceiling. These hoists are used by the chorus to lift Tristan and Yseult as they perform gravity-defying choreography, and later to lift a character sat on a small, crow’s nest-like platform encircling the pole so that they can observe the action below.

One of the production’s major strengths is how engaging it is. The ensemble are perfectly in sync, giving a high-energy performance and quite obviously loving the show. There is excellent interaction with the audience without straying into the realms of pantomime. In one scene, the Irish king appears on a platform in the midst of the ‘groundlings’ and announces that the venue is surrounded by Irish soldiers and that we, the citizens of Cornwall, have been seized. The confusion and amusement on everyone’s faces reminded me just how much I love it when theatre surprises people. The production reminded me, of all things, of I Want My Hat Back at the National Theatre, an adaptation of an off-kilter children’s book which was similarly knowing and silly. Another major strength is the physical movement which, frankly, is breathtaking. I’ve never seen such tight choreography, from the fight scenes to the dancing – which is practically acrobatic at times.

Giving a rating to this production is hard because it depends to a large degree on your criteria. As a night of theatre, it is excellent, exuberant and was ecstatically received, particularly by younger members of the audience. As a retelling of the fable, it is a stretch and strays too far from the tragedy in favour of (incredibly entertaining) comedy. I’m in no position to wade in on the wider debate as to the purpose of the Globe, but, as excellent as the production was and as beautiful as it looked in the space, I’m not sure if the two were a natural fit for one another (although they certainly didn’t detract from each other either).

All of this is beside the point; Tristan & Yseult is a great production and an excellent show to take a theatre-skeptic to. It’s thoroughly engaging, light on its feet and constantly surprising. Park your preconceptions and I defy you not to be entertained.