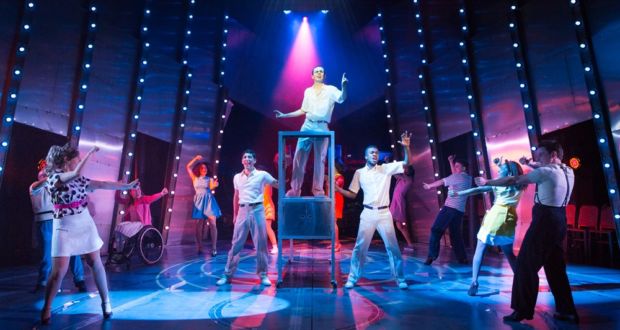 Pros: The cast, the live music and the great use of integrated sign language.

Pros: The cast, the live music and the great use of integrated sign language. Cons: Pete Townshend - bloody good songwriter, questionable grasp on narrative structure. Ramps on the Moon is a long-term collaboration between a number of theatres and theatre companies, whose collective aim is to create shows that are accessible by and inclusive of people who are d/Deaf, disabled and visually impaired. In their latest outing, The Who’s 1969 rock opera Tommy is given a vigorous makeover that mercilessly ties the story, which startis in WWII, to the present day. As a young boy, Tommy witnessed a&hellip;

Inclusive, energetic and compelling, this is theatre at its best.

User Rating: Be the first one !
Ramps on the Moon is a long-term collaboration between a number of theatres and theatre companies, whose collective aim is to create shows that are accessible by and inclusive of people who are d/Deaf, disabled and visually impaired. In their latest outing, The Who’s 1969 rock opera Tommy is given a vigorous makeover that mercilessly ties the story, which startis in WWII, to the present day.

As a young boy, Tommy witnessed a traumatic incident that has caused him to retreat into his own mind. He might be unresponsive to his environment, but – as anyone with a passing familiarity with Pete Townshend and co knows – this ‘deaf, dumb and blind kid’ is also very, very good at pinball.

The book is definitely not the show’s strongest suit. The songs are amazing, but the plot line tying them together is pretty tenuous. Particularly in the second act, where Tommy suddenly rises to Messiah-like status, it’s hard to ignore the feeling that all of it makes very little sense. Subtlety seems to be a dirty word, and complex issues like child abuse and bullying are skated over with remarkable speed. Act two has little in the way of new songs, instead mostly repeats those we already heard in Act 1 before the interval. Nevertheless, no one is going to complain at another rendition of the show’s most famous number, Pinball Wizard.

The thing is, none of this really matters, because Ramps on the Moon have taken a flawed book and given it a production that’s simply, utterly brilliant. Seeing significant numbers of d/Deaf and disabled actors on stage in a show which deals with how society treats disability, completely changes the experience. The production values were always going to be excellent – first-rate cast, eye-catching set and costumes, great live band – but having this particular company adds a poignancy that makes it a must-see show.

I have rarely seen a group of actors who are so attuned to one another, and the end result is definitely a group effort. (with special mention to Peter Straker’s outstanding performance as the Acid Queen.) The band are an absolute joy and positioned on stage they are an intrinsic part of the action, occasionally even coming forward to take a minor role. Yes, sometimes it all gets a little bit loud, but to be honest, I’d have been disappointed if it hadn’t. Who wants a quiet rock opera?

Tommy features surtitles projected above the stage, as well as integrated BSL interpretation. This means that, rather than having a BSL interpreter at the side of the stage, signing is done by the actors as part of the show. It makes for a stimulating and energetic evening that is accessible for a very diverse audience. My plus one, for example, was quite thrilled to discover that captioning allowed him to follow along with the lyrics, which in turn meant that he understood the show a lot better. (He doesn’t have any hearing impairments, he’s just a self-diagnosed ‘can’t listen to the music and lyrics at the same time’ person.)

With this show, Ramps on the Moon have proven beyond doubt that accessible and inclusive theatre does not have to be good ‘in spite of’, but that its quality can, at least partly, lie in the ‘because of’. I hope the rest of the theatre world is taking notes.