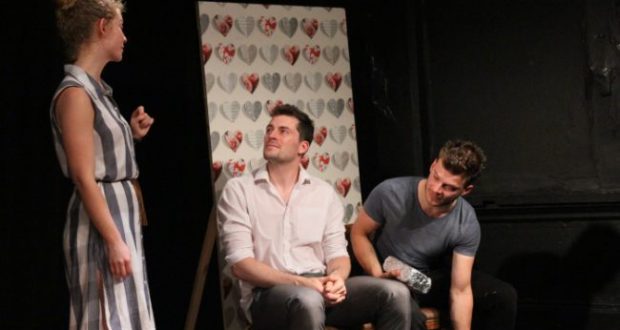 Pros: An entertaining and witty script, with energetic performances and wry political insight

Pros: An entertaining and witty script, with energetic performances and wry political insight Cons: Too many weak political gags, and unconvincing regional localisation The English Heart is a play about love, lust, trust and relationships. But it’s also about the heart of England - Boston, Lincolnshire, the home of Brexitland and location of UKIP leader Paul Nuttall’s final bid for power. The opening scene is set just after the referendum, and Marie (in a strong performance by Anya Williams) is trying to sell her late parents’ home. Andre (Andrew Jardine), recently returned from South Africa, is a cash buyer&hellip;

An intimate look at England’s heartland, seen through the eyes of a returning expat

User Rating: Be the first one !
The English Heart is a play about love, lust, trust and relationships. But it’s also about the heart of England – Boston, Lincolnshire, the home of Brexitland and location of UKIP leader Paul Nuttall’s final bid for power.

The opening scene is set just after the referendum, and Marie (in a strong performance by Anya Williams) is trying to sell her late parents’ home. Andre (Andrew Jardine), recently returned from South Africa, is a cash buyer with plans to build a walled garden and make his English country house dream come true. “You sound very cultured,” Marie observes. “Not when I’m working,” Andre replies. “I’m in finance. I’m a total shit.” Tall and handsome, it’s little wonder Marie’s husband Jake (a cheeky performance by Jake Williams) mistrusts him.

Marie and Jake refuse to discuss Brexit; they’re sick of the talk, the arguments, the pros and cons. “Politics is basically a lot of old people who’ve had their lives making decisions for young people like us who haven’t.” Like Brexit voters hankering nostalgically for earlier, simpler times, Andre has an expat’s view of Middle England, a land created by Agatha Christie and populated by bumpkins. He compares Brexit – brought on by a mistrust of foreigners who were drafted in to do the jobs no locals will touch – with apartheid in South Africa, where the black population was treated with similar disdain.

The sale is concluded, with the agreement that Marie and Jake, who live just the other side of the field, will continue to come in and look after the place for him. Marie will clean and take in packages, Jake will chop wood and set the fires. But Marie’s lust for Andre is evident even to Jake. “I think he’s pleasant. It doesn’t mean I fancy him,” she protests. “I’m married.” “But he isn’t,” Jake replies knowingly.

Andre needs a weekend retreat where he can escape the pressure and the crush of population in the city. What he wants, more than anything, is solitude. But the attentions of both Marie and Jake deny him this, their neediness forcing him into a corner. As he explains on the phone to a work colleague: “The problem is you’re trying to please two markets at the same time. You’re spreading yourself too thinly.”

Matthew Campling’s script is sharp and frequently witty, although the weak political jokes quickly become wearing. There are some production anomalies: Why does prospective buyer Andre appear in the first scene doing up this shirt? Why does Marie not have a Lincolnshire accent? Why does Jake not have a north country accent, since that’s where he claims to be from? The lack of regional accents serves to highlight the fact that Marie and Jake don’t have the sensibilities of people who have spent their lives in the Midlands and the North.

This is an energetic, enthusiastic production which moves smoothly between comedy and intimacy without ever descending into farce. Clothes are shed and donned, passions raised and politics discussed. In the end the English heart is both broken and mended.