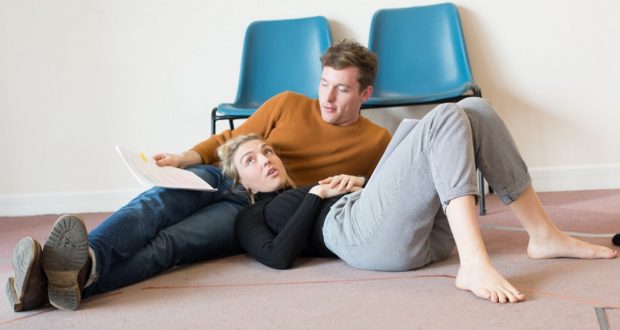 In Punts at Theatre503, we meet two loving parents who declare their love for their son – in an unusual way. We spoke with playwright Sarah Page about her inspiration for the piece, favourite moments and finding the light and humour in a topic that’s unfamiliar to most.

Can you tell us more about the play? What is it about, and what should audiences expect from this production?
Punts is about two loving parents who hire a prostitute to take their disabled son’s virginity. It begins with the sex worker’s visit and shows the impact of this event on each of the characters’ lives. Audiences can expect to laugh and hopefully be a little moved. They should also be prepared for occasionally very rude jokes. I’d advise that it’s not a play to watch sat beside your parents or by anyone on a first date.

What was the inspiration behind the piece?
My interest in the subject matter first started in a pub with a group of my university mates. A heated debate broke out about if prostitution was a necessary part of a capitalist society, if sex work was inherently anti-feminist and the issue of decriminalisation. I realised that this is something that people had strong, often black and white, opinions about. My interest was piqued further by travelling to areas of Nevada in the U.S. where brothels are legal, and later the red-light district in Amsterdam. The play started as a piece about a brothel actually, but bringing the story into a wealthy family’s home opened up far more possibilities for me.

Some may find the topic controversial, even though it’s of course true to life. Did you find any difficulties in creating this production, given the subject matter?
I believe that research is crucial when you’re exploring a world you’re not familiar with, and it was initially very difficult to get people to speak to me about this topic. The English Collective of Prostitutes were very supportive and helped me arrange a number of incredibly useful interviews. The central idea for Punts came out of these meetings. In fact, those interviews were so interesting, I probably came away with enough material for a dozen plays. My next play will probably include a retired dominatrix with ‘spanker’s elbow’.

What is your favourite moment of the performance?
There’s a wonderfully awkward yet sexy scene between the parents that was great fun to write. [Actors] Clare [Lawrence-Moody] and Graham [O’Mara] are both superb actors with perfect comic timing and they’re bringing the scene to life better than I’d ever imagined.

The play is a mixture between drama and comedy. Why do you think bringing lightness and humour to such a sensitive topic is the best way to introduce this topic to an audience?
When I’m watching a play, I don’t like it when I feel like I’m being lectured to about a subject. I think people intrinsically go to the theatre to be entertained and have a good time. Humour can be very useful as device to draw the audience in, and to make them like your characters, before then unsettling them. I like finding the comedy in those sensitive moments – my favourite lines are the ones that the audience feel a little bit guilty for laughing at.

What do you hope the audience will walk away with after seeing the play?
I’ve tried to not pick a side on the divisive issue of sex work, but I do hope that those audience members who came in with a black or white opinion leave contemplating the grey areas. A great thing about being a writer is that it’s rare for someone to know what you look like, so in the bar afterwards you can usually hear some pretty open discussions about the play. The queue for the ladies’ bathroom is the best. I’m hoping there will be some arguments about sex work and disability there afterwards.

Punts is currently playing at Theatre503 through 24 June.