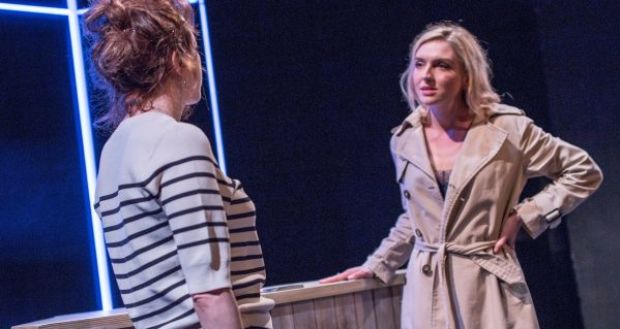 Cons: A mixed bag of characterisation. Never quite finds the balance between moments of comedy and moments of preachy polemic.
Punts, Theatre503 – Review

Pros: Good fun and good looking. Cons: A mixed bag of characterisation. Never quite finds the balance between moments of comedy and moments of preachy polemic. Jack is a young man with a learning disability. His loving parents, Antonia and Alistair, are desperate for him to enjoy the experiences of young adulthood, so they hire a sex worker, Julia, to take his virginity. It’s a brilliant subject for a play: delicate, little discussed and ripe for comedy. Yet, Punts fails to reach its potential either as comedy or as social commentary. Jack’s learning disability means he has trouble reading&hellip;

An entertaining comedy that talks dirty but acts coy.

Jack is a young man with a learning disability. His loving parents, Antonia and Alistair, are desperate for him to enjoy the experiences of young adulthood, so they hire a sex worker, Julia, to take his virginity. It’s a brilliant subject for a play: delicate, little discussed and ripe for comedy. Yet, Punts fails to reach its potential either as comedy or as social commentary.

Jack’s learning disability means he has trouble reading people, is ill-at-ease socially and lacks the filters that most of us apply to conversation. That aside, he is gentle, shrewd, attentive, handsome, fit, good-natured and never repetitive or tiresome in any way. Julia, for her part, is smart, articulate, caring, pretty, high-earning, altruistic and fit. I’m not aware of knowing any sex workers, so I will reserve judgement on whether that combination of attributes is typical in the oldest profession, and simply observe that it’s a pretty exceptional combination in any line of work. Anyway, Jack and Julia are in the bedroom with a deed to be done. And while we might feel queasy about the idea of parents facilitating their child’s sexual initiation in this way, or about Alistair and Antonia’s belief that a one-off, professional shag might improve Jack’s overall wellbeing, the seduction and post-coital scenes really are uber-tasteful. Barring a careless elbow to the face, and Jack dutifully reciting the steps as he goes along, everything occurs without embarrassment or mishap. It’s a rather coy, soft-focus, gently comedic depiction that doesn’t feel completely truthful.

When she’s not in the bedroom with Jack, Julia shows a surprising willingness to hang out with his parents in the kitchen, discussing worktops and the rights and wrongs of prostitution. She has an astonishing ability to switch from flirtatious minx to earnest sociology lecturer, and credit to Florence Roberts for bringing to life the many, many facets of Julia’s character. Conversely, Clare Lawrence-Moody and Graham O’Mara have to work with much less complex, less sympathetic characters. O’Mara, who was so brilliant and charismatic in Kuleshov Theatre’s Cans, is totally wasted in the soporific role of Alistair, the mild-mannered barrister. Lawrence-Moody gives great comedy as the middle-class, interiors-obsessed professional wife, but then has an uphill struggle to convey the serious side of Antonia, devoted mother and Cambridge medical student manqué.

The set and sound design have a techno feel. Amelia Jane Hankin’s simple, effective set creates a bay-window seat and a stylish kitchen with little more than clean neon lines, and there’s a bit of a rave vibe in the scene changes. In common with other aspects of the production, set and sound design are aesthetically pleasing but don’t quite seem to fit the narrative. The important issue of consent, which here is used for a moment of cheap drama, rather than serious discussion, would be more clearly illustrated if we actually saw a boy’s bedroom rather than a minimalist techno boudoir.

All of that said, Punts is good fun and entertaining. There’s a nice introduction to rugby for beginners, an impressive array of fnarr jokes and plenty of affectionate comedy around family life. I particularly enjoyed Jack’s ongoing attempts to distinguish between his mum’s two friends, Sophie-three-divorces and Sophie rabbits-in-the-garden. The play also has an interesting take on the hierarchy of needs; Jack’s parents see his need for love and intimacy, but overlook his need for self-esteem and autonomy. They pay Julia to make Jack a man, but what she actually does, which is much more powerful, is to treat him like one.

Previous: Beauty and the Beast, Barons Court Theatre – Review
Next: The Enchanted – The Bunker – Review