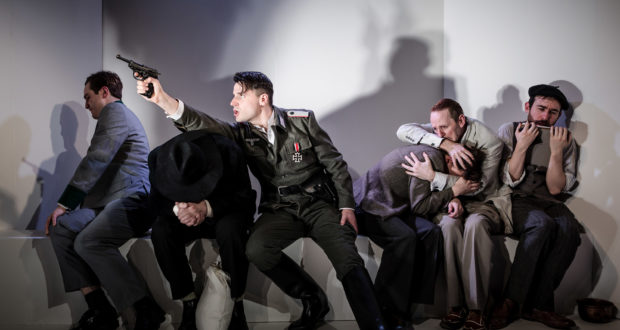 After a highly successful run at the Finborough Theatre, Arthur Miller’s Incident at Vichy transfers this June to the King’s Head Theatre. The play, which is perhaps Miller’s best example of Symbolist writing, is set during World War II in Vichy, France, in a bare room where the Nazis have summoned a group of men. Bringing this lesser-known Miller play to the stage is director Phil Willmott, who’s been described by the Guardian as ‘one of the best, most versatile and prolific directors around’. Here, Willmott reveals the challenges of this rarely-staged piece and explains why Miller is considered one of the most important American playwrights of the twentieth century.

Incident at Vichy resonates strongly in our contemporary society, especially in relation to the politics of U.S. President Donald Trump. What message do you hope the play sends to contemporary audiences through this production?
I think, psychologically, it is a very complex play, and its main message is that any compulsory registration and rounding up of people based on a perceived notion of their cultural background is wrong. But it also looks at the way that people who are subject to this [persecution] deal with it. Some of them deal with it heroically and make principled stands, and some of them are so terrified that they comply and make matters worse. So, although the headline grabbing issue [is] that, quite rightly, it’s odious to do this cultural religious profiling, the most interesting thing [that’s] well worth exploring is what happens when this does take place.

The first run of Incident at Vichy at the Finborough Theatre was highly successful at the box office and with critics. Should audiences expect any changes from the Finborough production? Is there any feedback you’ve taken on board for the King’s Head run?
I hope not, I hope that we’ll recreate it as closely as possible. We seemed to find a dramatic form that really spoke to people, which dramatised Arthur Miller’s ideas and philosophies clearly. I’m hoping that we’ll recapture it at the King’s Head.

This is the first professional London production of Incident at Vichy in 50 years. What are the biggest challenges you faced as a director of this rarely performed piece?
It requires a large group of actors to be on stage throughout and, even when they’re not speaking, to remain psychologically engaged. It wasn’t really a problem, but one of the interesting challenges was making sure that all those characters have an inner life throughout the production so that their cumulative effect has its full power.

In a review of Incident at Vichy at the Finborough, a reviewer noted you saw the play as being the closest Miller’s work came to absurdism, and you also mentioned the symbolist meaning of the play in a separate article. Could you elaborate further on this idea of symbolism and the absurd in Incident at Vichy?
I think theatre of the absurd is pushing it a little bit, but I definitely think that there are elements of expressionism within it, because the actual setup of the plot is quite artificial. The idea that you’d have a group of people, all of whom express a different view, confined together in a space so that they can debate – I don’t think that Miller was expecting us to look at that as realism. The characters relate to each other naturalistically, but the actual setup is symbolic more than realistic.

Arthur Miller is considered one of the most important American playwrights of the twentieth century. In addition to Vichy, your experience with his work also includes recently directing The American Clock. How would you explain the reasons for Miller’s importance to an audience member who’s unfamiliar with his work?
I think the attraction is that the characters feel so real and their emotions feel so raw, but it’s always presented within a framework [that] allows you to look at the wider implications of what they’re saying, and that becomes extremely satisfying. You get the emotional tug of watching these very real, very three-dimensional characters go through life-changing events, but you also get to understand what happens to them, and it gives you plenty to think about and discuss. So it engages your heart and your brain.

You are a multi-award-winning director, artistic director, playwright, composer, librettist, arts journalist and, sometimes, even actor. As a professional that has already worked in every sector of the industry, what do you consider to be your biggest achievement?
I’m very proud of the theatre season [that] I create every summer at The Scoop amphitheatre, which is adjacent to City Hall on the banks of the river Thames, because each year I create a big family show and a big classical show that’s completely free to watch. Up to 800 people each night will come and watch these productions, and we know from our surveys that they’re people who don’t usually go to the theatre, but, because it’s free and perhaps they’ve walked past and seen us rehearsing, they become interested. Perhaps some of them arrive a bit uneasily and tentatively, at first, and then it’s a pleasure to see how the brilliance of the writing and the acting draws them into the story, and often they’ll stay for a whole evening. Some years it’s a short evening and some years it’s a big cycle of plays lasting three to four hours.

It’s wonderful to see how people who aren’t used to going to the theatre suddenly discover a love of sitting and enjoying a play with their neighbours in a very culturally and ethnically diverse audience from all across London. It really brings people together as a celebration of storytelling and listening to great plays from the past.

As a critic and theatre maker, what do you value the most about the reviews you receive for your work?
I do take criticism seriously. I do read everything and think about what the critics say and, if there’s a broad consensus, I always think it’s well worth considering whether something works or doesn’t work. As you move forward with your work, you can look back and say, ‘OK, on the whole, people didn’t really get what I was doing there, or, on the whole, something I did or a technique I used really affected and touched people.’ Critical reaction becomes an important barometer to me in constantly assessing my work and the visual and conceptual language I use to bring a text to life.

Can you recall an episode when you felt strongly about a piece of criticism you received about your work?
A particular incident, going back to the free theatre season, is that when I started it, I assumed that everybody had a basic general knowledge of things like who Helen of Troy was, what the Trojan War was and the Greek gods. Quite early on, we did a production of Agamemnon and I remember getting feedback from the audience where lots would say, ‘I really enjoyed it, it was really exciting, but I didn’t understand what was going on.’ So that was a very important lesson to me to not take for granted that an audience has the relevant background information to enjoy a particular text and try to build into the production some way of bringing everybody up to speed. That was an important lesson to learn from that.

Do you have any new projects in the pipeline that you’re particularly excited about?
Yes, this year in the open-air amphitheatre, we’re going to be doing a big epic new staging of The Odyssey, which is the ancient Greek adventure story that’s full of mythical beasts and monsters and heroism and cowardice and comedy. At the moment, I’m preparing that and I’m really looking forward to bringing that to all sorts of audiences over the summer. Come to see us this year!

Incident at Vichy is currently playing at the King’s Head Theatre through 25 June.

The Free Theatre Festival will take place at The Scoop from 9 August – 3 September.