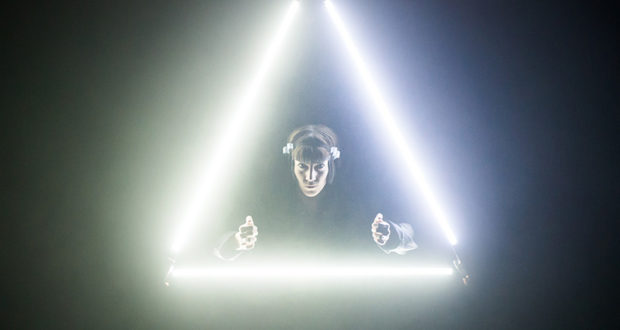 Pros: Visually stunning show that through mime captures perfectly the essence of paranoia and concerns over surveillance that Edward Snowden brought to light.

Cons: For some the intensity of the light and sound may be too much to cope with. Lights, Battersea Arts Centre – Review

Pros: Visually stunning show that through mime captures perfectly the essence of paranoia and concerns over surveillance that Edward Snowden brought to light. Cons: For some the intensity of the light and sound may be too much to cope with. When American whistle blower Edward Snowden leaked classified security information back in 2013, we could have guessed that it would be used as cultural reference for years to come. Maybe less obvious was that it would be the inspiration for a mime performance. But that is just what Theatre Ad Infinitum do with Lights, and as strange as the concept sounds, it works remarkably&hellip;

If you want The Matrix meets 1984 with a hint of 90s rave thrown in, Lights is the show for you, taking mime to a level you might never know existed.

User Rating: Be the first one !
When American whistle blower Edward Snowden leaked classified security information back in 2013, we could have guessed that it would be used as cultural reference for years to come. Maybe less obvious was that it would be the inspiration for a mime performance. But that is just what Theatre Ad Infinitum do with Lights, and as strange as the concept sounds, it works remarkably well.

The promotional material was certainly eye-catching, without really giving anything other than the Snowden connection away. Even the fact that it was mime was not obvious, the word itself hidden away; entering the wonderful Council Chambers of Battersea Arts Centre, it was difficult to have any real preconceptions of what was to come. What was always obvious was that this was not going to be mime as most of us probably imagine it if our only reference point is Marcel Marceau. Because where Marceau used lightness and playfulness, Theatre Ad Infinitum use darkness instead.

The story itself is your bog standard sci-fi fodder: a future society where everyone has a brain implant, meant to create peace by ending all crime and terrorism. Instead it ends with greater government control, leading to suppression of free thought and speech: the mass surveillance state Snowden warned us about. Thankfully though, it’s not the depth of story, or lack thereof, that is the selling point of Lights. Instead, it is very much the visual performance that draws you in.

As the house lights fade, the room is completely devoid of any light for a moment, and then it begins. The cast of five provide their own lighting to complement the mime: strip lights become walls, stairs and desks; torches highlight actors faces to emphasise emotion; strobe lights flicker to give jerking movement, most effective during the torture scenes, and hand-held torches act as the transfer of thought and memory between performers. It is effective and visually impressive, the blackout all around making it look incredible as lighting seems to move around performers without anything touching them. In conjunction with the lighting, the sound complements and aids understanding; the performer standing under a light suddenly becomes a man in the shower with the addition of the sound of water, whilst the drill they use to extract implants is momentarily real, even though it is just one light and a sound. The show is intense and spellbinding in its visuality, and certainly impresses in its style.

But, and it’s a big but, that same intensity has its own issues. For the first half hour I watched in awe at the incredible sights, the clever use of light and the perfect choreography. But as the show progressed I started to need to look away to rest my eyes: it all became too intense, my eyes started to ache and the bright lights irritate. By the end as I headed out into the lovely evening twilight my vision was blurred and smarting and I felt punch-drunk as I walked down the hill to the station. In fact a few people left during the performance, and I can only wonder if they were struggling with the same visual problems. It won’t be a problem for all, but for some this is going to ruin the show.

Lights is without doubt an incredible show, and demonstrates the possibilities of what can be done through the medium of mime; it is unique and performed with perfection. But it’s difficult to really love a show when you sit through half of it wondering if you will have a headache by the time you reach home. Rather than leave contemplating what you have just watched, there is the risk you leave relieved it’s all over.