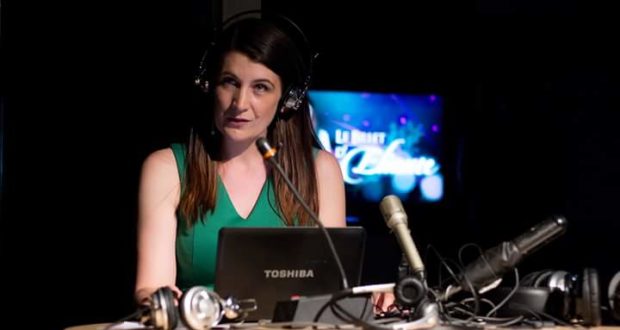 Pros: A skilled ensemble whose evident enjoyment is infectious. A great soundtrack featuring the great Gainsbourg.

Cons: Cluttered staging and an auditorium that (on one of the warmest evenings of the year) was like being at the centre of the earth.
Le Misanthrope, Drayton Arms Theatre – Review

Pros: A skilled ensemble whose evident enjoyment is infectious. A great soundtrack featuring the great Gainsbourg. Cons: Cluttered staging and an auditorium that (on one of the warmest evenings of the year) was like being at the centre of the earth. Celimène drunk, throwing up in a bucket, Acaste and Clitandre hoofing coke off a studio desk, Éliante and Philinte sharing a tender moment on the breakfast TV couch. Yes, obviously, it’s Le Misanthrope, Molière’s satire on the 17th century French court, reimagined by Exchange Theatre. Transposing the action to a modern-day metropolitan TV studio is not actually far-fetched; like&hellip;

A clever, lively reimagining that brings out all the comedy and continuing relevance of Molière’s text

Transposing the action to a modern-day metropolitan TV studio is not actually far-fetched; like the court, the studio is a hotbed of egotism, back-biting, hedonism and attention-seeking. In this bitchy little universe Alceste is the handsome news anchor loved by the ladies and envied by the gents, Celimène the ballsy, hard-living gossip columnist, egged on in her poison pen-portraiture by a gaggle of co-presenters.

Recreating a TV studio in a black box theatre doesn’t sound like a too tall an order but I get the sense that Exchange Theatre refuses to let its ambitions be governed by space or budget. Here, the stage feels stuffed with bits of set that get used in one or two scenes but don’t quite earn their keep overall. There are also two television screens because this is a multimedia production set in a world of 24/7 communication and unreliable electronic witnesses. In places this works well; it’s fun to see Alceste and Philinte’s PMSL texts during Oronte’s rap, and a nice touch to have reported speech rendered as an on-camera interview. A longish montage of TV news, however, is effective as an expression of disgust, but adds little to the story.

As misanthropic, self-righteous prudes go, David Furlong’s Alceste is pretty likeable. He takes on society single-handedly, but does it with more insouciance than bile, and when he quotes the theme from Titanic as a model of poetic eloquence, you sense that in his own way he’s having as much fun as the rest of them. By contrast, Simeon Oakes’ Philinte is a serious, genuinely strong and stable figure who manages to live in that world without being either corrupted or alienated by it. Palmyre Ligué gives a show-stopping turn as wannabe-gansta Oronte, while Fanny Dulin, as Éliante and then Arsinoé, is just a pleasure to listen to. This is a great ensemble in which all the actors manage to be vibrantly and comically of the moment, while doing full justice to Molière’s 350 year old verse.

Along with a bit of Phil Collins and a great cover of 9 to 5, the show is bookended by songs about being égaré or lost. The lyrics, I love you and I fear I’ll lose my way, seem equally apt in relation to Furlong’s Alceste and Anoushka Ravanshad’s Celimène. Both are adrift in a turbulent world where appearances matter more than sincerity, and their almost-union is a misguided attempt to find peace.

I toiled through Le Misanthrope for A-Level French, and Exchange Theatre’s production made me appreciate it in a way that dear Miss Bartlett never managed. More than many fringe companies, I would love to see what Exchange Theatre could do with more resources. Their infectious energy and enthusiasm, combined with technical skill and textual insight go a long way to make up for sometimes scrappy presentation. But their mission and undoubted ability to bring classic French texts to life for multi-cultural audiences warrant bigger and better staging.

Previous: Flashback, Theatre Utopia – Review
Next: Going for the Gut in ‘Mumburger’