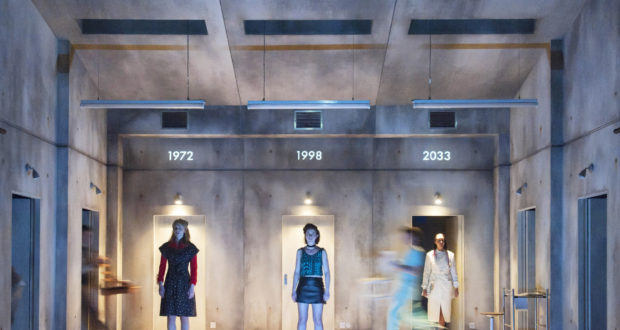 Cons: The style of 3 stories playing at once was confusing and exhausting at times.
Anatomy of a Suicide, Royal Court Theatre – Review

Pros: Birch’s new play is intriguing, supported by a stellar cast and excellent direction. Cons: The style of 3 stories playing at once was confusing and exhausting at times. One of the things I enjoy about being a theatre critic, besides the amazing excuse to feed my theatre-going habit, are the perks of press night. Some of the bigger venues offer free drinks, even snacks on occasion, but never until my trip to the Royal Court had I received a free copy of the play text with my press ticket; a fitting welcome from London’s premier new writing theatre.&hellip;

A powerful and poignant story of three generations of women who struggle with suicide.

One of the things I enjoy about being a theatre critic, besides the amazing excuse to feed my theatre-going habit, are the perks of press night. Some of the bigger venues offer free drinks, even snacks on occasion, but never until my trip to the Royal Court had I received a free copy of the play text with my press ticket; a fitting welcome from London’s premier new writing theatre.

The reason for my visit was Alice Birch’s new play Anatomy of a Suicide, directed by British tour-de-force Katie Mitchell. The play is a two hour-long marathon with no interval composed of three story lines, each set in different time zones, all played out on stage simultaneously. The story follows three generations of mothers and daughters who either commit or struggle with thoughts of suicide. Birch’s writing seeks to answer the question of whether trauma can be passed on through our genes. And while I’m not sure I got the answer to that question, Birch’s radical and arresting work is certainly engaging.

Our first story line begins with Carol (Hattie Morahan) in the 1970s; followed by the second which trails her daughter Anna (Kate O’Flynn) in the early 2000s; the third story then follows Anna’s daughter, and Carol’s granddaughter, Bonnie (Adelle Leonce) in the future 2030s. All three actresses were enthralling to watch, performing with ferocity and strength. While it was Bonnie’s story that intrigued me the most, it was Morahan’s performance as Carol that was the most evocative.

The entire cast truly run the leg work of this show. Not only do they each play multiple characters across all three generations, but their choreographed movements to change the set and costumes for the leading ladies is remarkable. Their precision and dedication is evident.

There is something novel and intriguing in seeing how three simultaneous story lines all played at once works; however, this novelty may not be for everyone. While there were excellent moments of rhythmic bliss with dialogues reaching crescendo and then falling to bring light to others, I can understand why it might feel like one has to work too hard to keep up. Audiences must reside themselves to the fact that they will not catch every little detail of the play in one evening. The actors were well-rehearsed in these patterns, with certain lines overlapping, but were also razor sharp in their focus to their scene at hand. Although I felt exhausted by the end of this emotional roller coaster of a play, the beauty and thrill of this stylistic piece comes from allowing the audience to decide where to focus their own attention.

Katie Mitchell’s direction is experimental, yet precise. Her intentions in her telling of this story are clearer than her previous work I have seen. The symbolism she focuses on, especially in terms of character’s entrances and exits, is supported by her diligent staging choices.

All in all, Anatomy of a Suicide is one of the more put together plays I have seen at the Royal Court; definitely worth a watch, maybe two if you can afford it! It’s radical storytelling at its finest, and maybe just on the cusp of greatness.